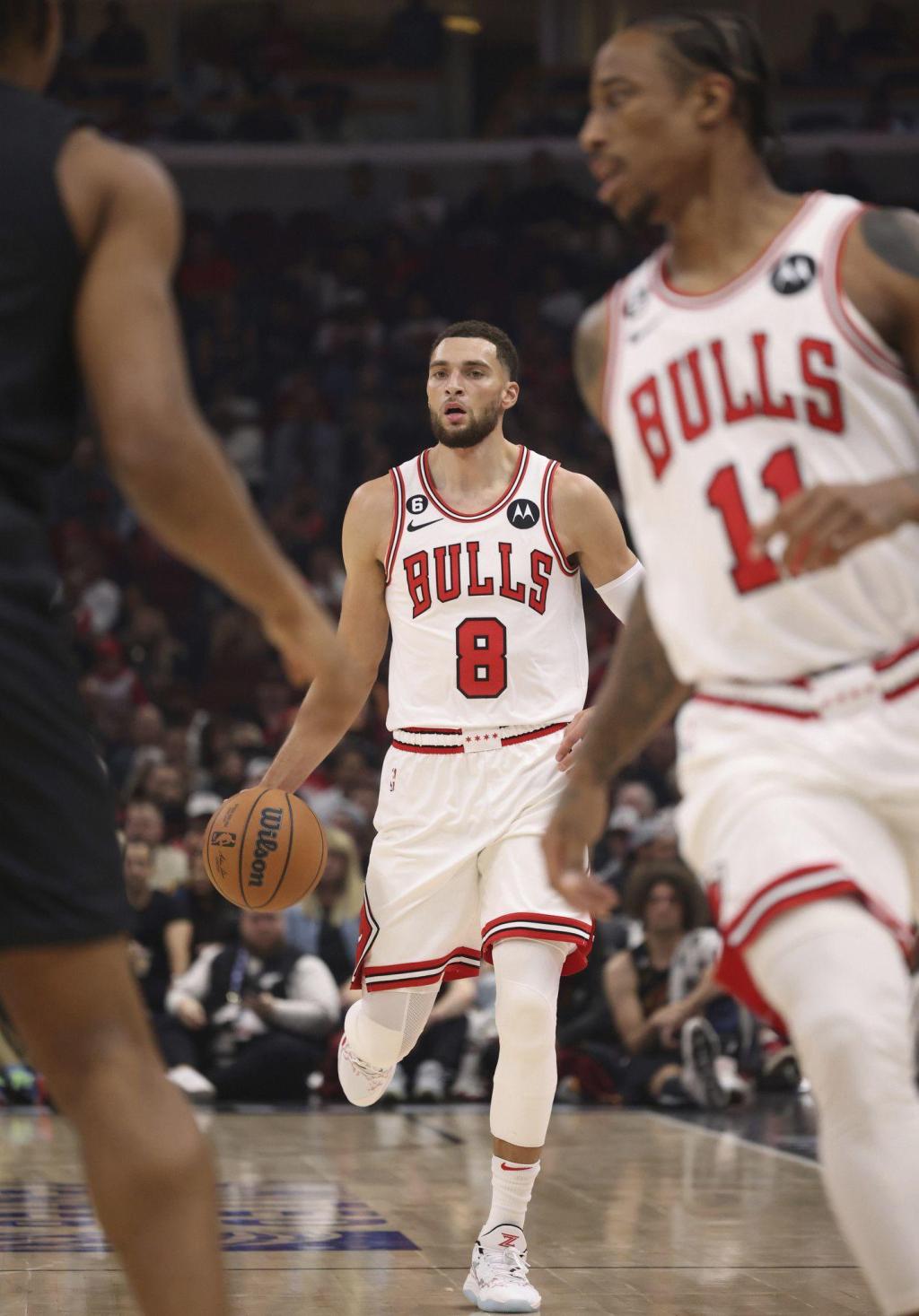 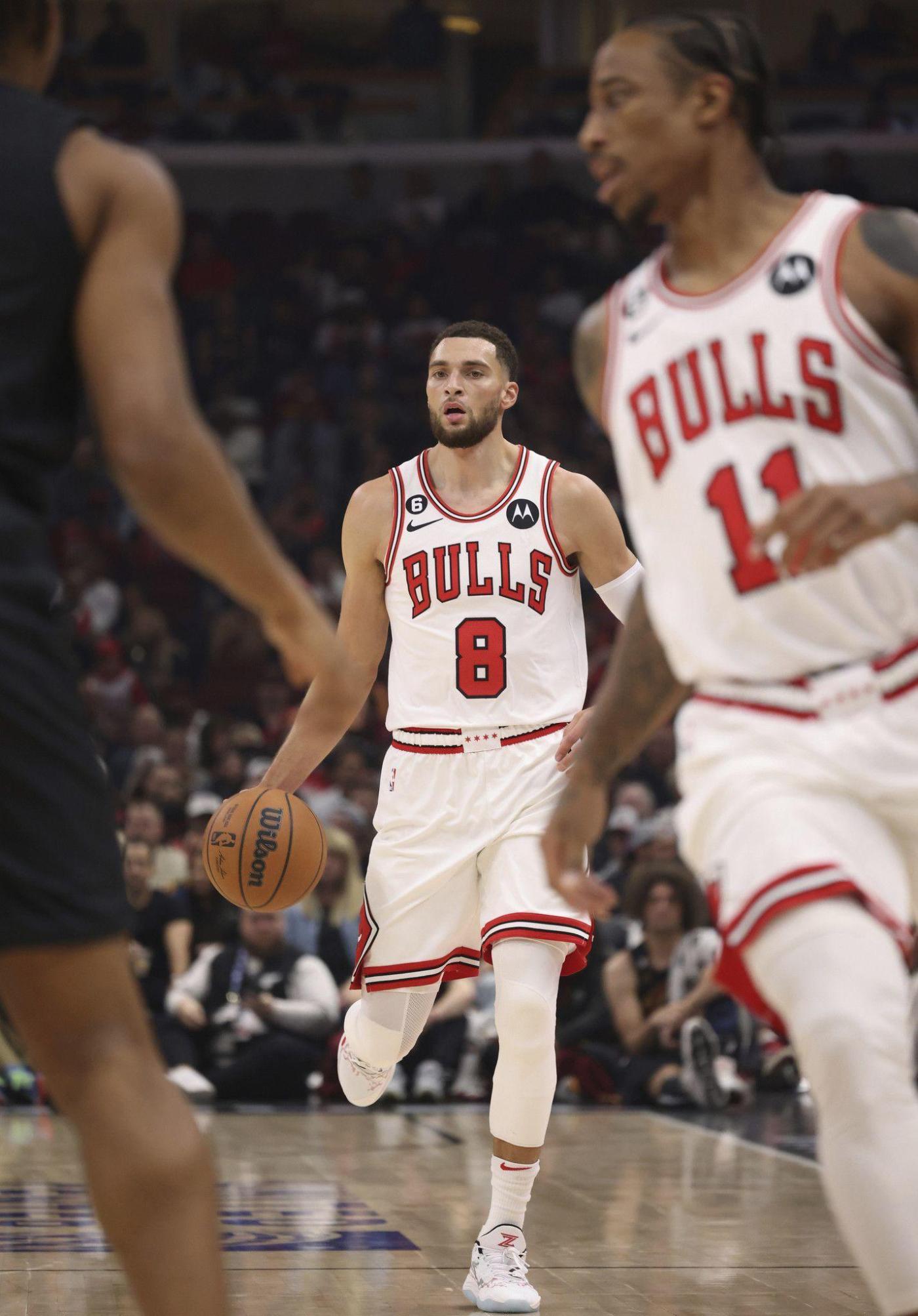 Zach LaVine made his season debut for the Chicago Bulls in the home opener Saturday at the United Center, but it wasn’t enough to hold off the Cleveland Cavaliers in a 128-96 loss.

The Bulls have lost two straight after falling to the Wizards on Friday night in Washington.

Here are six takeaways from the game.

After missing the first two games to manage a left knee injury, LaVine seemed to be back in peak form against the Wizards. He drained a 3-pointer on the second Bulls possession and finished with 23 points on 9-for-16 shooting and added four assists.

LaVine played 28 minutes, attacking double teams and ripping up the lane for searing layups in the first half. But he faded in the second half, scoring only six points while shooting 2-for-6 from 3-point range.

Coach Billy Donovan said LaVine would play free of a minutes restriction, but it was clear the Bulls were hoping to keep their All-Star guard under the 38-minute cap the coach previously revealed.

LaVine opened the game with a dominant 10½-minute stretch, tallying eight points, three assists and two rebounds before exiting with some visible fatigue. He played only six minutes in the second quarter to balance the early load but still finished the half with 17 points.

That production, however, dropped off in the second half as the Bulls offense floundered.

2. The Bulls bench unit was ‘disappointing’

The Bulls struggled mightily any time the second unit took the court, allowing the Cavaliers to go on their largest streak of the game during a stretch between the first and second quarters without LaVine, DeMar DeRozan and Nikola Vučević on the court.

Donovan shifted rotations in the second half to prevent the team from having a full secondary lineup on the court, ensuring that LaVine or DeRozan was in play until the final minutes of the loss.

“I was disappointed because that’s not been the group that’s been in training camp,” Donovan said. “That was the one thing that happened in that game that I thought was uncharacteristic. … We need each other and I thought that group in particular didn’t help each other enough. I felt we got stagnant and we just kind of stood. We didn’t cut and move, and that group has been really good doing that. That was the part that was surprising and disappointing.”

It might be time for Donovan to make a change at power forward after a third straight lackluster performance from Williams, who managed only two points in 11 minutes before subbing in for the final four minutes of the game.

Javonte Green and Derrick Jones Jr. both played more meaningful minutes than Williams. If Donovan decides to pull Williams from the starting lineup, Green is the most likely replacement.

Green scored six points off the bench, throwing down a pair of galvanizing dunks in the first and third quarters that provided the Bulls with much-needed energy boosts.

“That’s what he (Green) do,” DeRozan said. “The energy that he brings, the effort that he brings, it’s definitely contagious. You have to feed off that because every time he comes in the game that’s something he’s going to do.”

If the Bulls are going to win games, they aren’t going to get it done through 3-pointers. Even with LaVine’s return, Saturday’s game highlighted a continuation of long-range shooting concerns dating to last season.

The Bulls finished 24.1% from behind the arc. Meanwhile, the Cavaliers were 16-for-27 (59.3%) on 3s. The disparity created a clear momentum shift for the Bulls, who couldn’t dig themselves out of the deficit with perimeter shooting.

Despite recognizing 3-point shooting as a weakness last season, the Bulls made only one shooting acquisition in the offseason — veteran guard Goran Dragić. After a hot start in Miami, Dragić finished 0-for-1 against the Cavaliers.

5. First back-to-back of the season

The opening week posed a physical challenge for the Bulls, who played three games in three cities in four nights. Saturday’s game was the second of a back-to-back after they lost to the Wizards on Friday in Washington.

The Bulls were visibly exhausted after a pair of physical games against the Miami Heat and the Wizards. But they’ll need to learn how to adapt to those challenging series — the Bulls are slated for three more back-to-backs in the next three weeks.

The rookie played for the first time this season Saturday, running the offense at point guard for the last three minutes of the loss. Terry didn’t touch the statline, but cracking a rotation is an important step.

Terry made an impression in the preseason with his frenetic defensive energy and ability to push the ball in transition. He could work his way into more minutes, particularly as the team deals with LaVine’s availability.