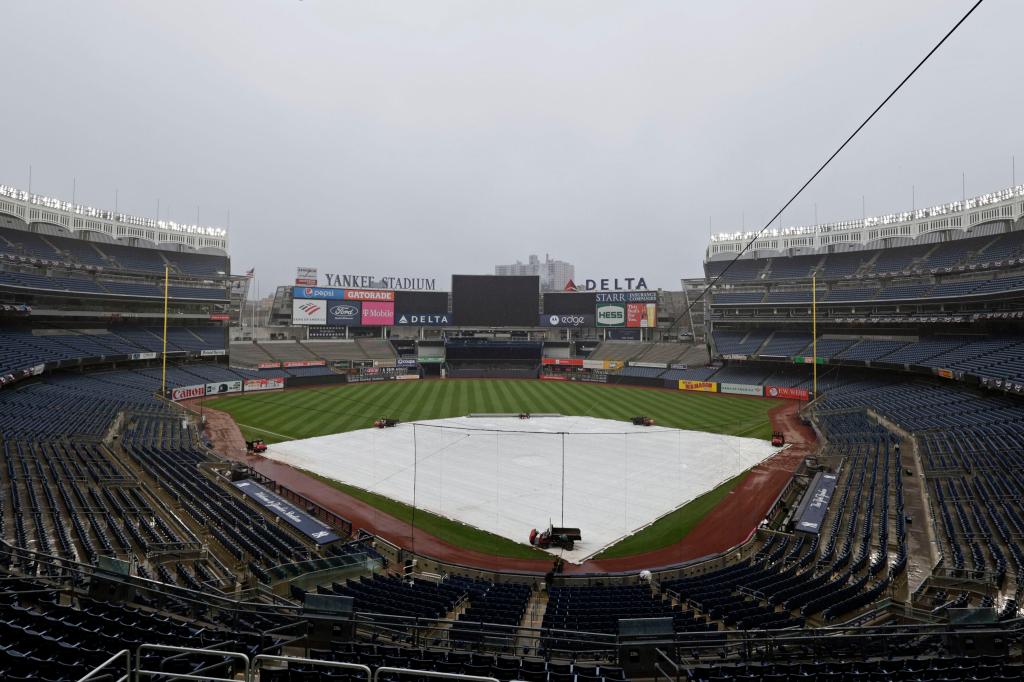 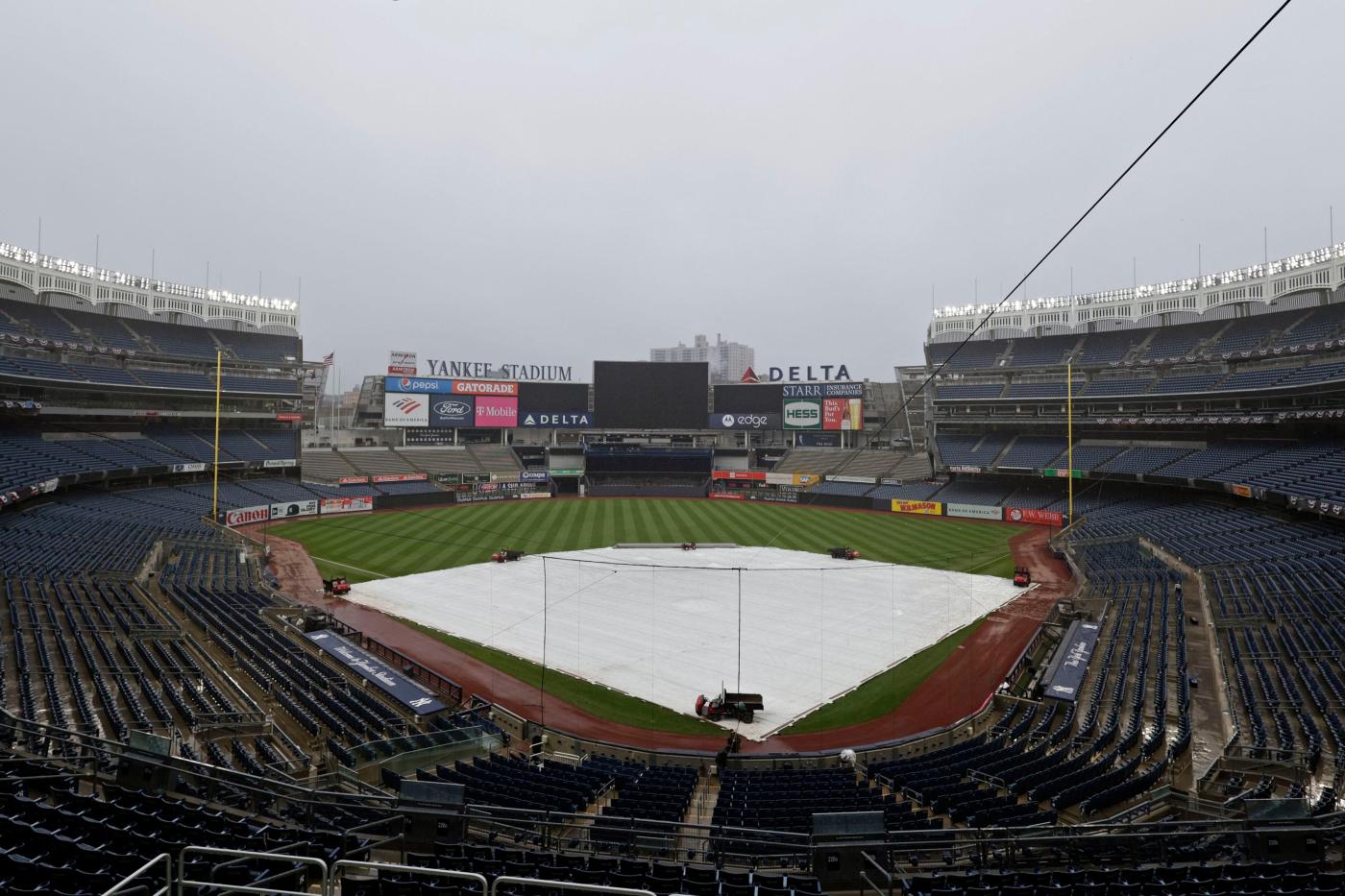 The Yankees pitching is in a pinch.

With two straight days of rain, the Bombers schedule has become an issue. The Yankees and Rangers were rained out Saturday and will play a single-admission doubleheader on Sunday, then finish the series on Monday. Instead of having two scheduled days off on Thursday and Monday, they will now play 23 games over the next 22 days.

It will be their longest stretch of the season without a break. Their next scheduled day off comes after their first series against Tampa Bay on May 29.

With a doubleheader on Sunday, the Yankees likely need a sixth starter on Thursday in the series opener against the White Sox in Chicago. The Yankees can add a 27th player for the scheduled doubleheader.

If the Yankees stay on rotation, Gerrit Cole, who was scheduled to pitch on an extra day of rest Friday, is likely to pitch Sunday with two extra days rest. The Yankees could use Luis Severino on an extra day of rest on Sunday as well, or they could stick in a spot starter in that doubleheader. By using a spot starter, that would push back the rest of the rotation and cover the starts until Cole’s turn on regular rest Friday.

It’s early in the season, so it seems unlikely the Yankees would want to bring Cole back on short rest for Thursday’s start against the White Sox. The Yankees have talked about the depth of their pitching all season and now it will be tested.

Michael King, who has been invaluable in the bullpen, could make a spot start. The young right-hander has given up just one earned run over 17 2/3 innings this season while striking out 25 and walking only three.

King has been invaluable only out of the bullpen as a high leverage and multi-inning reliever.

The Yankees just sent down Clarke Schmidt, with the intention of stretching him out to be a starter. The right-hander would still be within the 15-day window that he could not return to the big leagues, however.

They also have Deivi Garcia and Luis Gil in Triple-A, but both have struggled. Garcia, who had a breakout year in 2020, has a 9.00 ERA through four games. Gil, who made his major league debut to much fanfare last season, is even worse with a 9.53 ERA over five games.

J.P. Sears, the left-hander that spent the first few weeks of the season in the big league bullpen, could also be a candidate. He’s made three appearances in Triple-A, striking out nine over 7.2 innings.

Through 25 games, the Yankees pitching has been the cornerstone of the team. They have the best ERA (2.60) in the American League and the second best in the bigs after the Dodgers.

The Bombers’ pitching dominance comes both from the rotation and the bullpen. Yankees starters have a 2.85 ERA, also the best in the AL and third in the big leagues. The relievers have a 2.30 ERA, second best in the AL and the majors behind the Tigers (2.24), which may be a reason the Yankees do not want to upset the order down there by taking King out and using him for a start.

It’s quite a development considering before season started there was concern about the rotation behind Cole.

Jameson Taillon came into the season off October surgery to repair a ligament in his right ankle and they had no idea how his body would respond. He has issued only two walks in the 105 batters he has faced and has a 2.84 ERA through five starts. Severino had made nine starts over the last three years because of injuries, including 2020 Tommy John surgery, so that was a huge red flag. He has a 3.75 ERA through five starts. Lefty Jordan Montgomery was coming off a decent year in 2021, but the 29-year-old was getting to the point where people wondered if that was all he would be; a decent big league starter. He has allowed only one home run in 105 batters faced and has a 2.88 ERA, inflated by his first start when he pitched after being hit by a comebacker.

Nestor Cortes wasn’t even mentioned this offseason as part of the five-man rotation, which was a huge oversight. The lefty, who has used different deliveries to keep hitters off balance in the past, has shown he is simply a good pitcher. He has the best staff ERA (1.82) and has struck out an eyebrow-raising 31 over 24.2 innings pitched.

After the first three turns through the rotation, it was Cole who had the biggest question mark hanging over him with a brutal 6.35 ERA. In his last two starts, however, Cole has pitched well, throwing 12.2 scoreless innings with 15 strikeouts in that span.

Fans holding paid tickets for the game originally scheduled to be played Saturday, May 7, 2022, may use them for the rescheduled game on Monday, May 9 at 1:05 p.m., or exchange them for tickets to a similar regular season game at Yankee Stadium. The Yankees’ rain check policy can be found at www.yankees.com/raincheck.