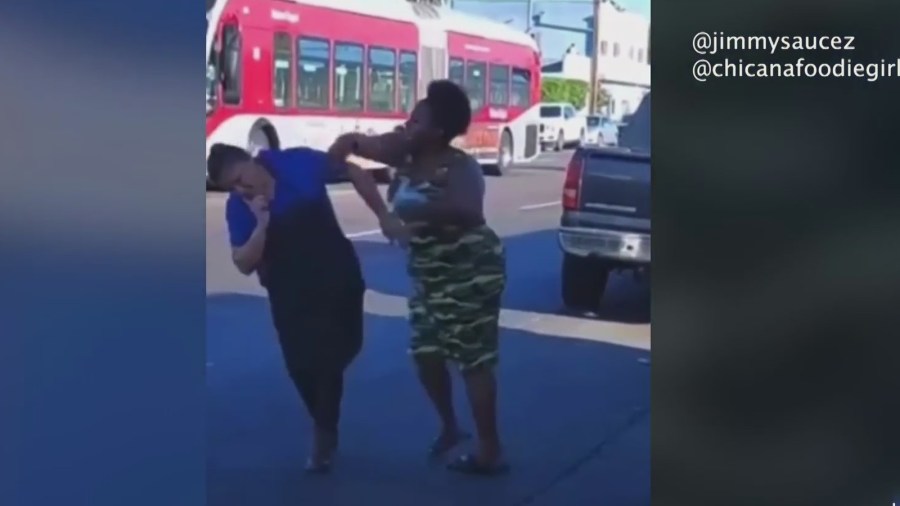 A street vendor was attacked by a crazed woman in the Harvard Park neighborhood of South Los Angeles over the weekend.

Witnesses at the scene said the woman demanded a burrito but became enraged when she found out that she’d have to wait. Video showed the woman dumping out bags of juice and bins of prepared food and then spitting on the vendor’s food and cooking equipment. She is then seen physically attacking one of the vendors.

The victim, who said her name was Bertha, told KTLA that the attack has left her frightened and scared for her own safety, but she still has to brave the streets because she needs the work.

Advocates for food and street vendors say there’s a growing number of vendors being targeted and attacked. Now they are hoping law enforcement will do more to protect them.

Jimmy Saucez is a self-proclaimed L.A foodie and influencer who says he wants to stand up for members of the street vendor community who he believes are not being heard.

“A lot of these vendors are here illegally so they are afraid to speak up,” Saucez said. “They’re afraid to voice their opinion because they fear they’re going to be prosecuted.”

Bertha has been working at South Tacos for more than a decade and is scared to speak up in case the woman or someone else comes back to harm them.

“Street vendors are vulnerable and they are on the streets and have no protection because there’s nobody there to watch over them and most of their transactions are cash so they’re easy targets for a lot of these hoodlums out there,” Saucez said.

Saucez said the video doesn’t really paint the full picture of what happened. He said the woman continued to chase Bertha who desperately tried to get away. In the end the woman does take off, but not until she destroyed much of the food stand, making a plate of food to go and then spitting on everything that was left.

“To see them throw the food on the ground that really breaks my heart,” Saucez said. “That’s just a sin, people are starving.”

The woman in the video could face criminal charges for assault if she is found by police, but vendors and advocates believe that is unlikely. Instead, they are hoping for more police to protect the streets.

Still, anyone who might recognize the woman in the video is urged to contact the Los Angeles Police Department tip line at 1-877-527-3247. You can also submit an anonymous tip online.