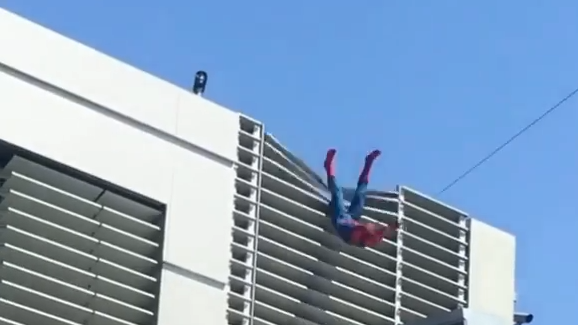 Visitors at Disney California Adventure Park on Thursday were in for a shock when they saw an animatronic Spider-Man hit the wall during a routine stunt show at Avengers Campus.

Just before the crash, visitors at Disney’s Avengers Campus could hear “Spider-Man” — i.e. Tom Holland, who lends his voice to the show — begging his artificial-intelligence assistant to deploy “airbags, please!”

During the stunt show, the computerized voice of Sharon responds, telling Spider-Man that the “web facility is not equipped with airbags.”

Had the stunt gone off without a hitch, the animatronic would have landed atop the rooftop on the left after performing a flip.

Despite the damage done to the building in the popular new Disney park area, the attraction wasn’t down for long. Parkgoers were able to catch later showings of the swing at Avengers Campus.

After the incident, a representative for Disney released a statement to Deadline: “As with any flight, there can be some bumps along the way, but Spider-Man was back in action in time for his afternoon adventures in Avengers Campus!”