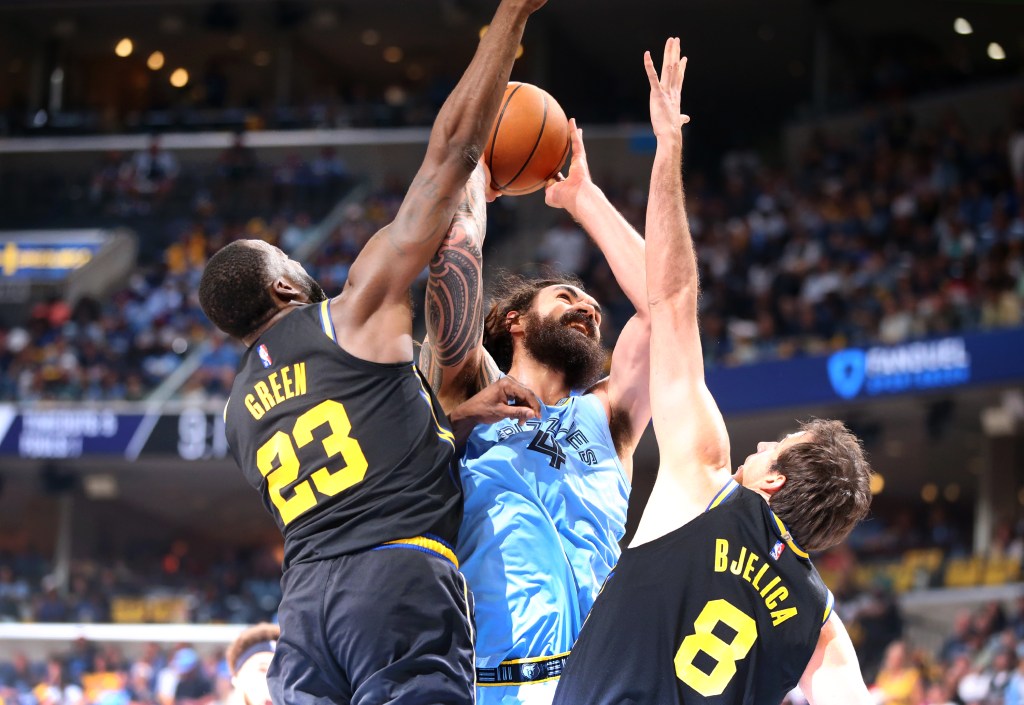 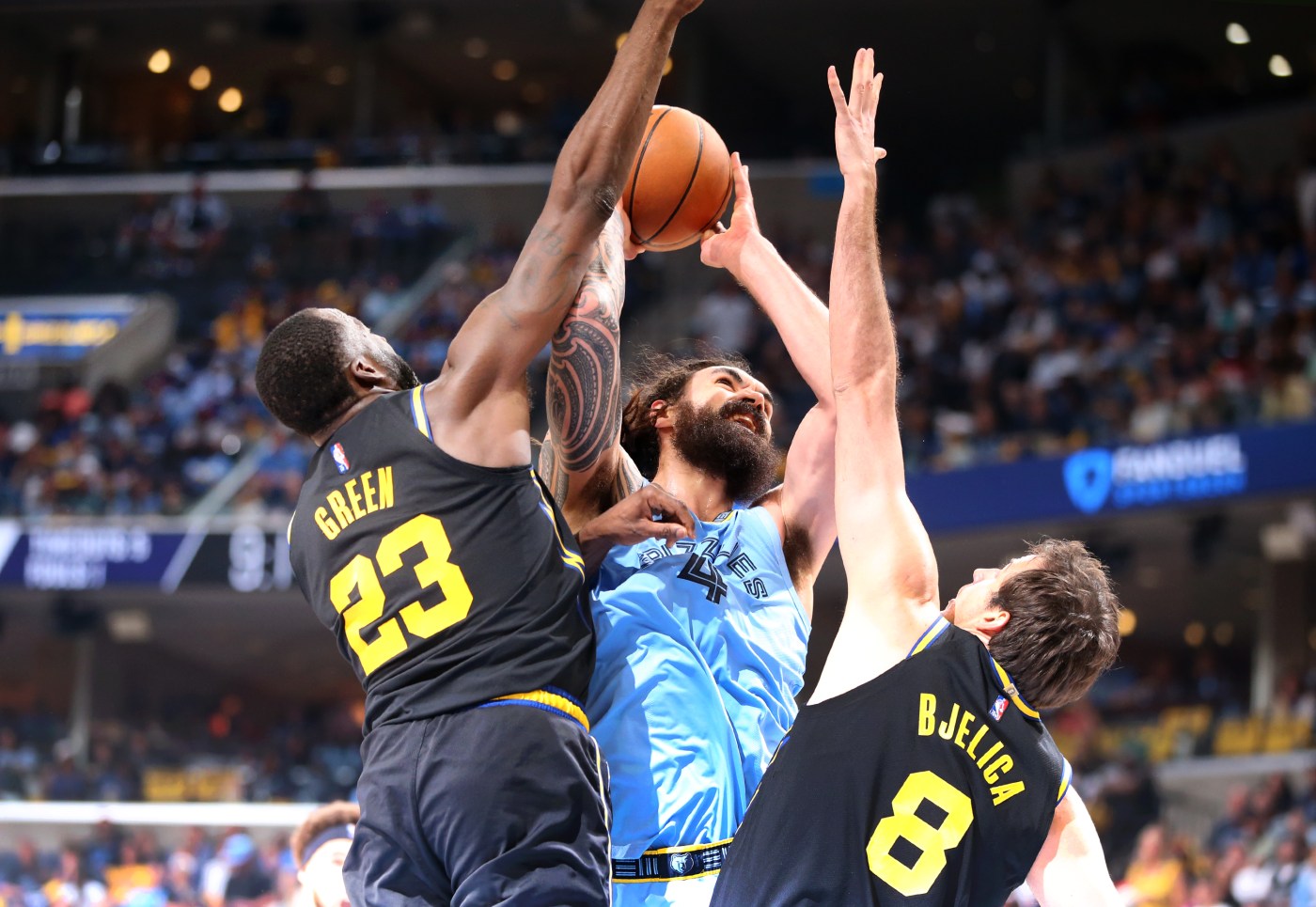 The Warriors are still a win away from clinching their first Western Conference finals berth since 2019. But they looked far from mentally capable of competing on that level in Game 5.

Draymond Green, a seasoned clinching game veteran, told the team before tip-off to “‘Bring your hard hats. It could be ugly.’”

It got ugly, all right.

The Warriors lost by 39 points, 134-95, at FedEx Forum in Memphis and fell down by as many as 55 in the third quarter. For the Warriors, that big of a losing margin came down the the smallest, most costly mental mistakes. They turned the ball over 14 times in the first half and were beaten on the offensive boards 13-2.

The second-half statistics are inconsequential since the starters were pulled mid-way through the third quarter when it became apparent a loss was inevitable, but Memphis out-rebounded the Warriors 63-45, 18-4 on the offensive boards.

A lackadaisical effort on both ends in the first half caused a landslide that should have Warriors fans questioning if this team has what it takes to buck up in must-win moments.

Turnovers are a staple of the Warriors’ offense — has been for most of the Steph Curry era. It’s something the team cedes in order to keep their offense fast-paced. And the pressure of the postseason hasn’t tightened the screws, either. Their 15 turnovers per game are tied for the most among remaining teams with the Grizzlies, no less.

But a handful of turnovers in a one minute of the second quarter turned the game. A comeback looked within reachwhen the Warriors came within 11 points with a Jordan Poole three-pointer with five minutes remaining. Then Draymond Green fumbled a pass for a turnover that led to a Tyus Jones 3. Kevon Looney botched a hand-off to Steph Curry for a turnover that led to a De’Anthony Melton layup and Green turned the ball over again on a bad pass into the paint to Curry out of bounds. Steven Adams scored an and-1 layup on the other end.

In one minute and three turnovers later, the Grizzlies had a 20-point lead.

“That’s something we’ve been talking about all playoffs. Not just tonight, not just the series,” acting head coach Mike Brown said of the turnovers. “We have to do a better job taking care of the ball. We have to settle down on offense to try to limit them because when you have turnovers like we did tonight, especially tonight, it snowballs and it kind of deflates us as the game goes along.”

Draymond Green and, at times, Steph Curry and Jordan Poole have caused too many momentum-killers. The turnovers have gotten worse in this series, where the Warriors’ are averaging 17 turnovers per game — the most in the playoffs. Green’s responsibility on offense is to facilitate, find the open man and keep the ball moving until they can find the best shot to take.

“We have to take care of the ball and rebound,” Green said. “Those are two keys to this series and we did both horribly tonight.”

But Green has been stumbling into more turnovers than plays — he had five in 22 minutes on Wednesday. Over the last last three games, he’s had 11 turnovers, 18 assists and 12 points. For the series, he has 20 turnovers and 24 points. Not an ideal ratio. Often times, Memphis is telegraphing his passes.

On Wednesday, Curry turned the ball over twice and Poole four times when he couldn’t keep his handle off the dribble. Curry played 25 minutes and Poole 20 before sitting out for most of the second half. Curry said they need to be more mindful of taking the open looks they’re getting while mitigating the risks they’re taking.

“We showed that, and then all hell broke lose in terms of losing the possession game,” Curry said. “Slowing down, being more mindful an understand we can get great shots if we are more conscious of that. When we do it right, we win, when we don’t we lose.”

Dominating the boards has been a staple of the Warriors’ success against Memphis so far. The Grizzlies entered the series as one of the best rebounding teams in the NBA, but an undersized Golden State team has been neck-and-neck with the Grizzlies on the offensive boards — both averaging 11 per game in four games leading up to Game 5.

But the Warriors were out-rebounded 63-45, 18-4 on the offensive boards. For a team that feasts on transition offense, those missed boards snowballed into a clogged and disjointed offense.

“We’ve had an alertness and awareness when it came to boxing out early and we didn’t have that tonight,” Brown said. “There were too many times throughout the course of the game where their wings and bigs ran by us…we have to do a better job of going and seeking a boding and boxing them out early and hope one of our teammates gets the rebound.”

Along with Green, Andrew Wiggins and Otto Porter Jr. — and Kevon Looney, at times — have been instrumental in keeping the count close. Wiggins’ has been more aggressive than he was in the regular season fighting for rebounds, using his length and strength to wrangle the ball on the offensive and defensive ends. He’s averaging 6.5 rebounds per game in these playoffs.

But Wiggins wasn’t quite his playoff self on Wednesday. He had one rebound in 20 minutes. Porter Jr. did not return for the second half with a foot injury. His status for Game 6 is unknown.

Individually, none of the Warriors performed to their standards. It resulted in an embarrassing loss. With the Grizzlies in survival mode, the Warriors need to match their energy before things snowball a little too far.