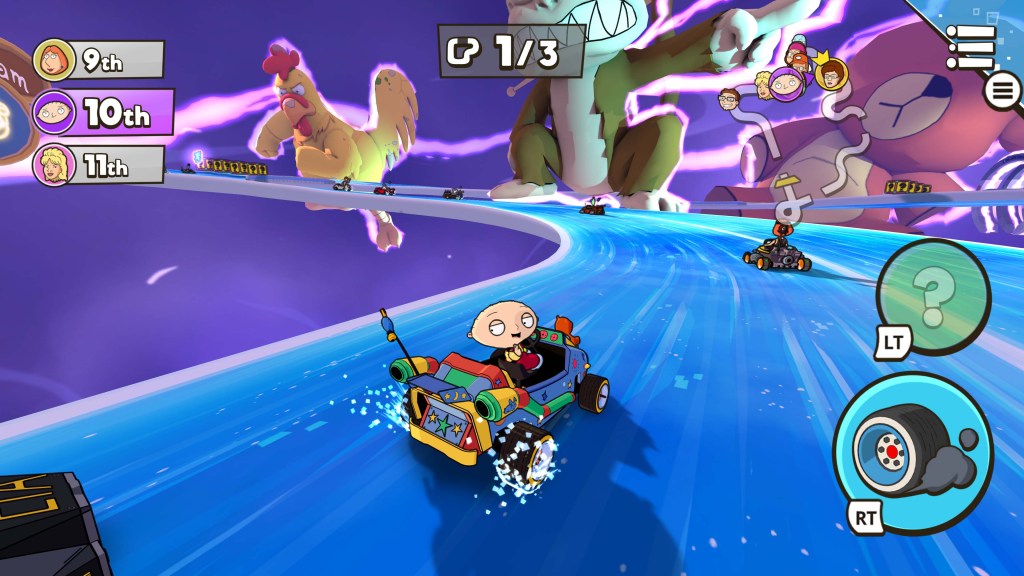 What makes these games successful is that there’s a basic formula and developers can plug in whatever characters are necessary. It’s a fun genre that’s accessible to most players. That’s why “Warped Kart Racers” looks to be a promising game headed to Apple Arcade.

Developed by Electric Square, this kart racer stars characters from 20th Century Animation. The roster includes 20 heroes from shows such as “Family Guy,” “American Dad!,” “King of the Hill” and “Solar Opposites.” They’ll compete across 16 maps that also happen have their own themed traits and shortcuts. The karts themselves are customizable with the gliders and antennas showing off a player’s personality.

“Our design pillar was frenetic karting shenanigans and I think we delivered,” said Nicholas Lovell, director at Electric Square.

He said “Warped Kart Racers” is infused with irreverent humor that some of the franchises are known for, but that’s up to a limit. The humor still has to be within Apple Arcade’s 12+ rating. Don’t expect “Family Guy” humor like this.
TWO MODES WITH THE ACCOUTREMENTS
When they start, players will find a race mode and a battle mode. In the race mode, players compete against 11 other karts using items such as shields, dumb missiles and drop weapons. Battle mode has the same array of items except players are in an enclosed arena.

Electric Square took pains in creating a visual style that works with a number of different franchises. They wanted to create a game, in which seeing Hank Hill racing against Peter Griffin looked natural. It appears that they pulled it off fairly well. The team also said that though “Warped Kart Racers” features 20 characters at the start, they have plans to expand the roster. I’m hoping for some “Bob’s Burger” integration.

Players can choose any racers and not worry about their stats because every character is equal. Keeping a level playing field was a conscious decision, Lovell said. They wanted fans to pick their favorite TV show character and have fun. It also means that “Warped Kart Racers” doesn’t have as much depth and the decision eliminates the need for balancing characters.

UNLOCKING NEW CHARACTERS
Initially, players will have access to eight characters but through a 10-hour campaign they can unlock everything. The tracks are available to all from the start. The longevity of “Warped Kart Racers” will come from its online multiplayer and its progression system that unlocks new karts and parts.

When it comes to multiplayer races, players can expect competition of 8 human players and 4 AI-controller racers for a total of 12 on the track. Lovell said it creates the right amount of chaos. What’s notable here is that there is a bit of rubberbanding with the competition. Players who are behind will have a higher chance of getting better items.

AI characters will also use shortcuts scattered throughout the tracks about 90% of the time. To find them all, players will have to be perceptive of their surroundings or follow some characters who are seemingly always ahead. As in other kart racers, those paths always carry some risk.

Lastly, “Warped Kart Racers” will be playable on iPhone, iPad and Apple TV. The game can be played with touch controls but it also supports controllers. Whatever scheme players choose, Lovell said, “We don’t think there’s a huge advantage for one or another.”

“Warped Kart Racers” is scheduled for launch on May 20.