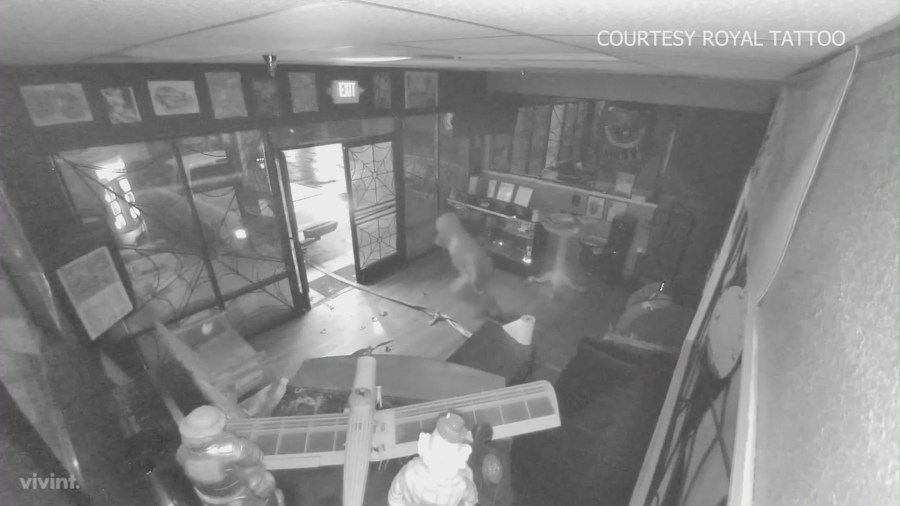 Multiple victims say the suspects appear to be the same crew of thieves using the same pickup truck to carry out the destructive burglaries.

The suspects are believed to be responsible for targeting multiple businesses in Colton, San Bernardino, Loma Linda and more.

Business owners are hoping the thieves are caught soon to prevent them from devastating another small business again.

A recent heist of Royal Tattoo in Perris on Sunday night was captured by security cameras.

With the front door wide open and alarms blaring, a suspect is seen tying an ATM machine to the back of a truck parked outside.

After securing the tie, a second suspect, the truck driver, is seen quickly speeding away, violently yanking the ATM machine to the ground and out the door.

The image is an all-too-familiar scene, to the victims. They say the heists always involve two male suspects and a white pickup truck yanking the ATM machine.

“One taller guy crowbars the heck out of it, busts through the window, jumps in, gets some big heavy-duty straps, hoists it around our atm,” said Lana Mack, the general manager of Papa Joe’s Sports Bar.

After smashing through the front window, a thief scurries inside and quickly straps a rope onto a corner ATM machine. As the getaway truck attempts to speed off with the ATM, the maneuver is thwarted by the wall underneath the window, sending tons of debris flying into the air.

Eventually, the two suspects lift and roll the machine out the window before loading it onto their truck bed.

“The fact that it was done pretty quickly, you can see they had some practice and all of us pretty much agreed on that,” said Mack.

Mack says not only was the clean-up afterward quite the ordeal, but the business is also now short of thousands of dollars.

Anthony Romo, owner of UpperCuts Barbershop in Loma Linda, said the thieves had targeted his business twice in the last two weeks.

“They slammed on the window a couple of times,” said Romo. “It’s a double-paned window. You’re not going to have any success. So the next attempt, they came in and used a crowbar and pried the door open and this time they were successful.”

Little did the thieves know, the barbershop didn’t have an ATM machine inside.

“After they ran in, they realized I don’t have an atm machine,” said Romo. “I have a candy machine that resembles an ATM. So they took their straps, wrapped them up and then ran out the door.”

The break-in still left Romo with around $1,000 in damages.

Victims said the suspect’s vehicle is an older white pickup truck with noticeable chipping on the paint. They’re hoping someone can identify the burglars soon so they can’t strike another small business again.

“I’m here to make a good living for my daughter and for them to do this and target us again as a second attempt, you don’t feel good about it,” said Romo.