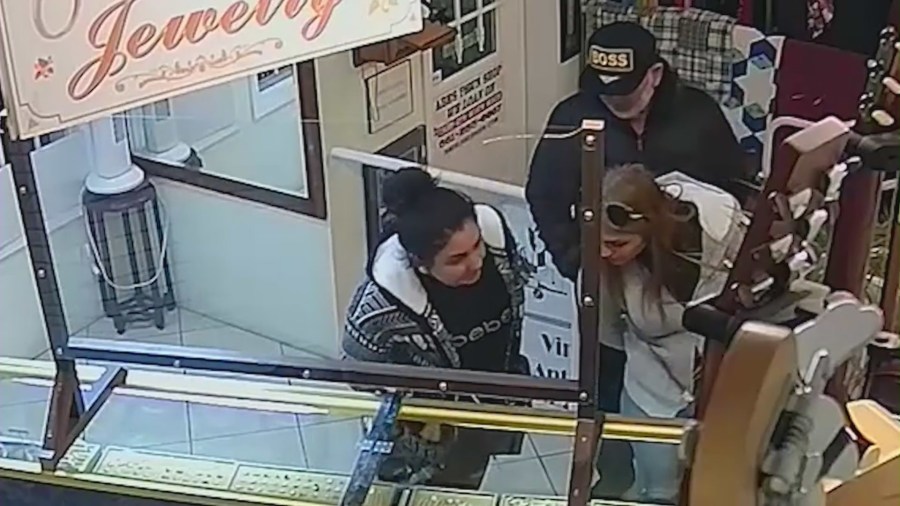 Video captured a trio of suspected thieves attempting to use distraction and sleight of hand to steal jewelry from a Santa Clarita shop on Tuesday night.

The trio is believed to be part of the same group that snatched a $40,000 ring using sleight of hand from another Santa Clarita jewelry shop earlier this month.

“I was really shocked,” said Avo, co-owner of Jewelry Fixx, the shop that was previously targeted by the thieves. “Honestly, I was dumbfounded. I had no words.”

Avo said the suspects seen in the Newhall incident are the same people who walked into his shop, distracting his father while escaping with a costly, one-of-a-kind ring.

One striking element he noticed was an identical patterned jacket worn in both instances.

“I can’t believe they’re continuing to do this to small businesses and continuing to take what doesn’t belong to them,” said Avo.

At Abe’s Pawn Shop, video shows the suspects lingering around a jewelry case and asking the clerk whether they had more expensive items for sale.

In a sudden twist, the clerk had recognized the trio from KTLA’s recent newscast. He alerted the shop’s owner who suddenly appeared from a back room, apparently spooking the group.

Thieves use sleight of hand to snatch $40,000 ring from Southern California jewelry shop

The suspects quickly left the shop, but the owner continued following them outside.

As the group continued walking, the owner is seen trailing behind them while a minivan is also seen following along, believed to be the trio’s getaway car. The owner says a heated confrontation ensued before the suspects hopped into the minivan and sped away.

So far, the suspects have yet to be captured.

Avo is offering a $1,000 reward for any information that leads to the suspects’ arrest and conviction.

Employees noted the suspects spoke with an Eastern-European accent and told associates they were tourists from Italy.

Both shop owners are hopeful the thieves can be captured before they strike another small business again.

Anyone who recognizes the thieves is asked to call the Santa Clarita Sheriff’s Office at 661-260-4000.