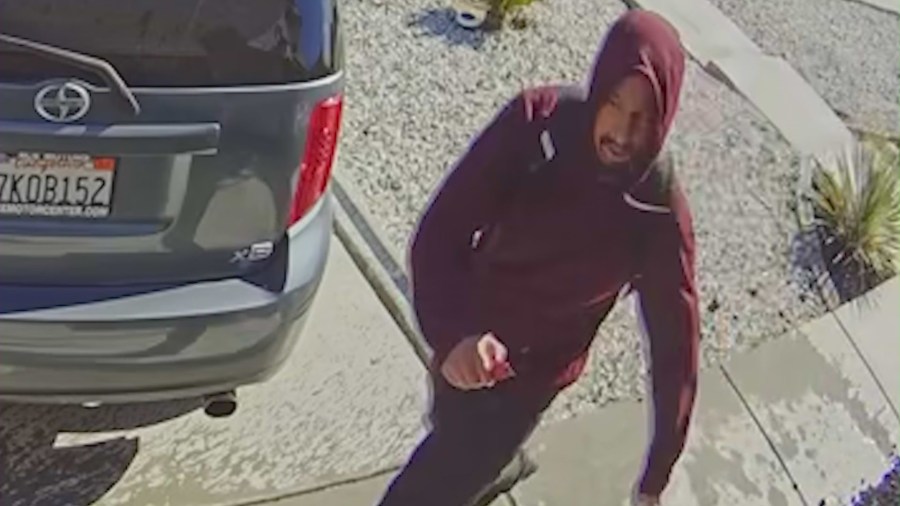 A gardener working at a Victorville home was viciously attacked by a wanted felon with a box cutter who was walking in the neighborhood.

The incident occurred around 12:15 p.m. Thursday in the 15000 block of Riverview Lane, the Victorville Police Department said in a news release.

The homeowner, James Smith, who regularly hires the gardener to do work at his home on Riverview Lane, had just pulled up with his family when they noticed police and an ambulance outside their residence.

“I looked and we walked up and he was holding his head and he was leaning on the car,” Smith told KTLA’s Shelby Nelson. “He said the guy attacked him and he was working right here.”

While the gardener was working on the home’s fountain, Ring video shows a man with a Puma backpack and a dark red hoodie walking past the house.

Authorities said that the man, now identified as 25-year-old Justin Valencia of Victorville, walked by several times, even waving at the gardener at one point.

Video shows the 25-year-old turn back, walk up to the house with his right hand in his pocket.

That’s when authorities said Valencia attacked the gardener with the box cutter, slashing him on the head and on the face before running away.

“He didn’t lose consciousness and he was talking to people, but he was just in a lot of pain,” Smith said of the gardener, who was taken to the hospital for his injuries.

Neighbors said the attack has raised their awareness and prompted many of them to do more to protect themselves.

“It could have been anybody. That’s what’s so scary about it, you never know what’s going to happen anywhere at any given time,” Smith said.

Valencia was eventually found in a dirt field, allegedly with the weapon used in the attack. He was arrested and booked on suspicion of assault with a deadly weapon.

He also had an outstanding felony assault with a deadly weapon warrant out of Riverside County and a parole hold, officials said.

The victim’s son reports that his father received stitches and was released from the hospital, though he remains shaken by the entire ordeal.