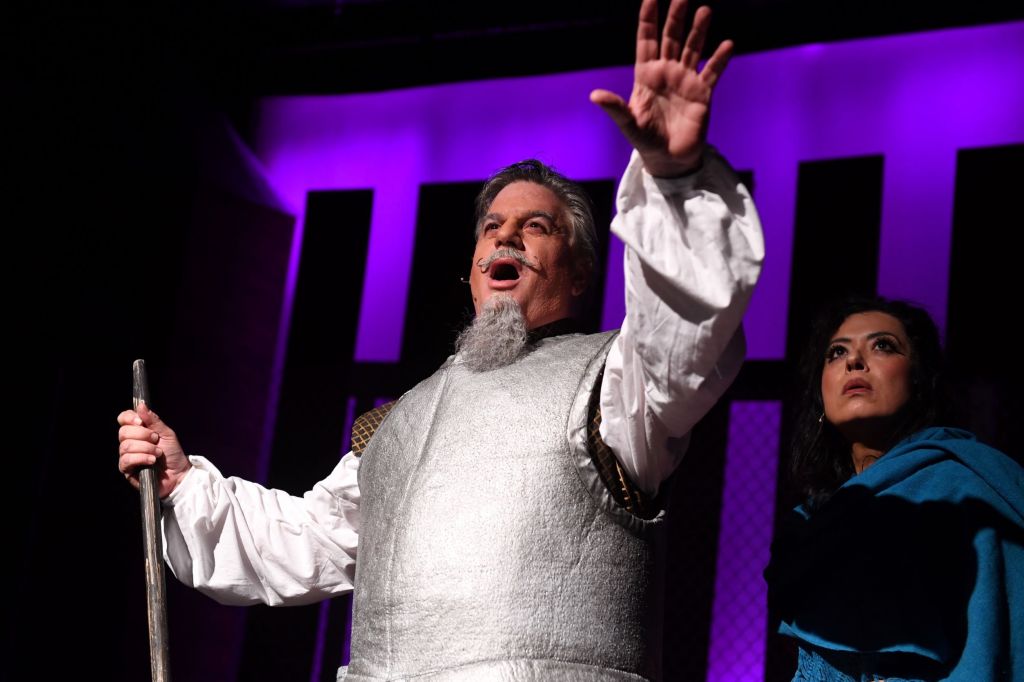 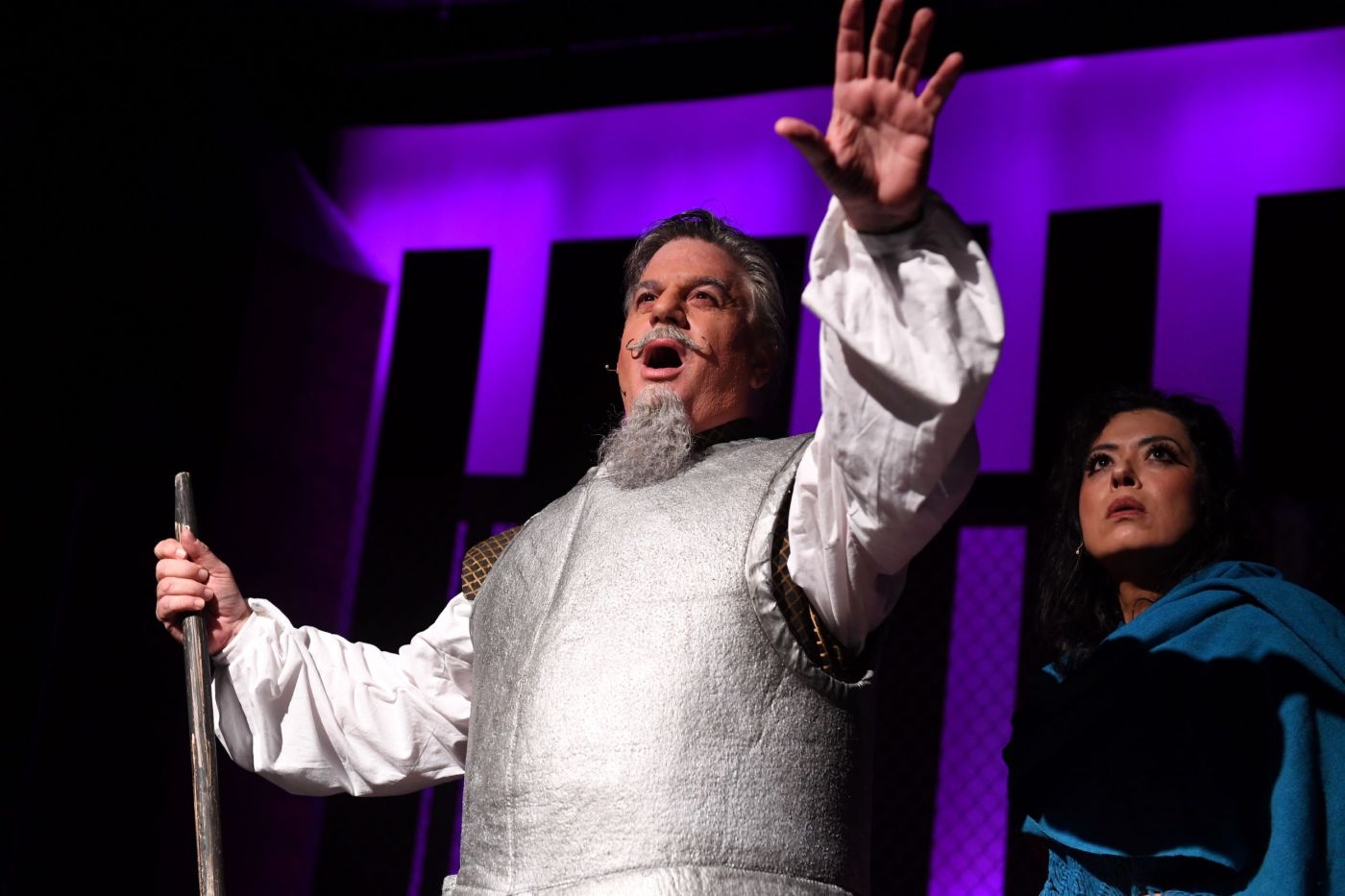 The chain link fence and shimmery solar blankets dominate in San Jose Playhouse’s new production of “Man of La Mancha.” These items of detention center life, a reminder of horrific 21st-century human rights violations, meld the parallels of an old Spanish prison with the chilling cinder blocks of modern cruelty.

The scenic choice works in some slick ways and pays dividends throughout the production. It’s a blatant reminder of a prison’s stifling quarters while making the case that art transcends the cold walls that attempt to suffocate dreams and desires. And while an opening pantomime is not as effective as intended, with the original 1965 Broadway overture underscoring, the point is made.

The Playhouse’s production of one of the great American musicals in the canon has plenty of hits yet its share of misses. Mitch Leigh’s music and Joe Darion’s lyrics, brought together with Dale Wasserman’s incisive book, is handled sweetly by the cast as a whole, despite rough patches that come with navigating the nuances of digital orchestrations and microphone crackling. All of it lives on a witty stage concept by set designer Julie Engelbrecht.

The aging and failing tax collector, poet and actor Miguel de Cervantes (Stephen Guggenheim) and his manservant (Jeff LaGreca) are arrested in full costume from a performance and face the charge of foreclosing on a monastery. As they await trial in a Seville dungeon during the Spanish Inquisition, the duo faces a kangaroo court of fellow prisoners who are compelled to rob them of a trunk full of props and costumes. One item in particular compels them — a manuscript of Cervantes’ incomplete novel, “Don Quixote.”

Facing a trial, Cervantes offers an alternative — a presentation of his defense as a play with other prisoners as characters in his story. He impersonates a man — knight errant Don Quixote — and his manservant becomes the unflappable Sancho Panza. They are both ready to battle evil while bringing chivalry back into the world. The use of the blankets in creating the story’s iconic windmill is a particularly nice touch.

While there are moments where stakes need to be raised with individual performances and in director Scott Evan Guggenheim’s staging, many aspects work well. The vocal timbre of Stephen Guggenheim coupled with Quixote’s specifically poetic dialogue is pleasing. His Quixote hears everyone but listens to no one; he is a man whose delusions of grandeur drive every desire, every intention. LaGreca is a delightful foil as Sancho, one who takes every punch thrown by his liege but sticks around because, quite simply, he likes him.

As the production continues to sally forth, moments and individual performances become more purposeful. Quixote’s scintillating love interest Aldonza (Sandra Bengochea), a server at an inn and part-time prostitute, a woman whom he dotingly calls Dulcinea, is his biggest obstacle. Bengochea is effective at playing a tortured soul mocked and ridiculed constantly while showcasing decadent operatic vocals throughout Dulcinea’s more penetrating notes that live in the high register.

The sharpest aspects of the production lie in some of the individual voices that translate the heavenly score. “I’m Only Thinking of Him,” a personal favorite, always has the potential as a show stealer, and it does not disappoint here. Jim Ambler’s piercing Padre is matched beautifully with Emily Song’s syrupy-sweet vocals as Antonia and Katya Roemer’s more character-driven turn as the Housekeeper. F. James Raasch and his succulent pipes contribute much as Dr. Carrasco, a voice added to the harmonious reprise “We’re Only Thinking of Him.”

Other ensemble moments are effective, led by choreographer Kristin Kusanovich in a show that is more movement- than dance-driven. The translations of Brian Conway as The Mule and Isai Centeno as The Horse are compelling and inventive. And while there is space for the muleteers to craft darker, deeper and more dangerous vibes, they have some nice moments against Bengochea’s rage and vulnerability.

The show’s signature songs are accounted for splendidly in this production. Guggenheim’s “Impossible Dream” has an exemplary balance of skill and urgency. “A Little Gossip” from LaGreca is a delight during a tense moment when the myth of Quixote has been shattered. While one of the show’s final moments plays awkwardly, a clunky series of attempts by Dulcinea to free herself to get to Quixote, the “Dulcinea” reprise is one of the most impactful moments in the narrative.

“Man of La Mancha” reminds us of the power of a virtuous quest. A foe might be unbeatable, sorrow may be unbearable, but there is such enthralling beauty when reaching for something impossible.

David John Chávez is chair of the American Theatre Critics Association and served as a juror for the 2022 Pulitzer Prize for Drama. Twitter: @davidjchavez.

Book by Dale Wasserman, music by Mitch Leigh, lyrics by Joe Darion, based on the novel by Miguel de Cervantes, presented by San Jose Playhouse

Health & safety: Proof of vaccination and booster (if eligible) required, masks must be worn in the theater