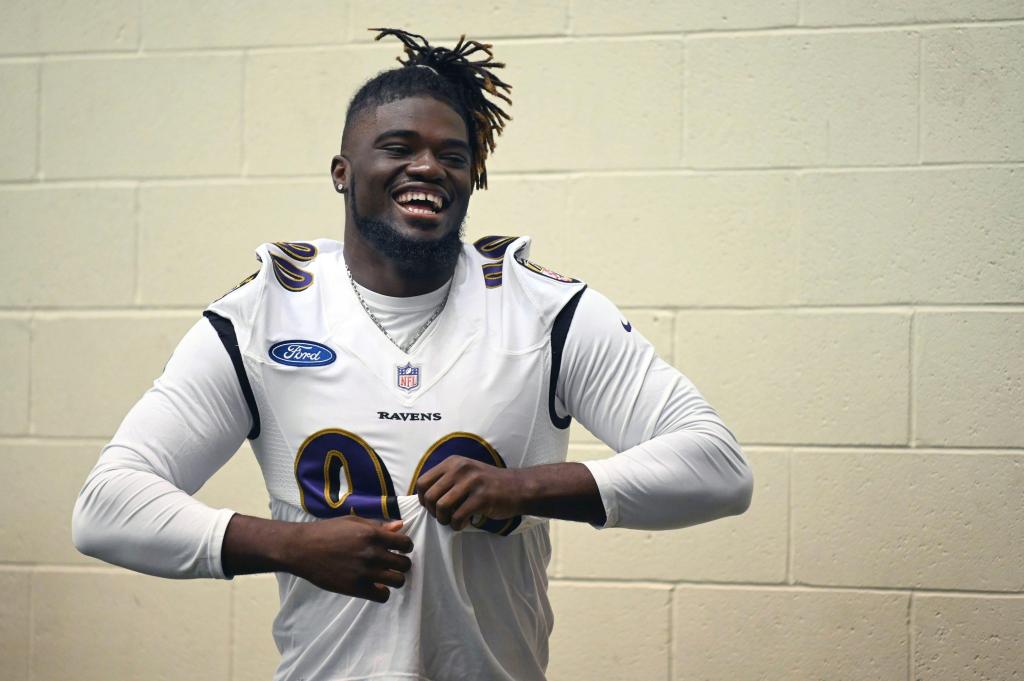 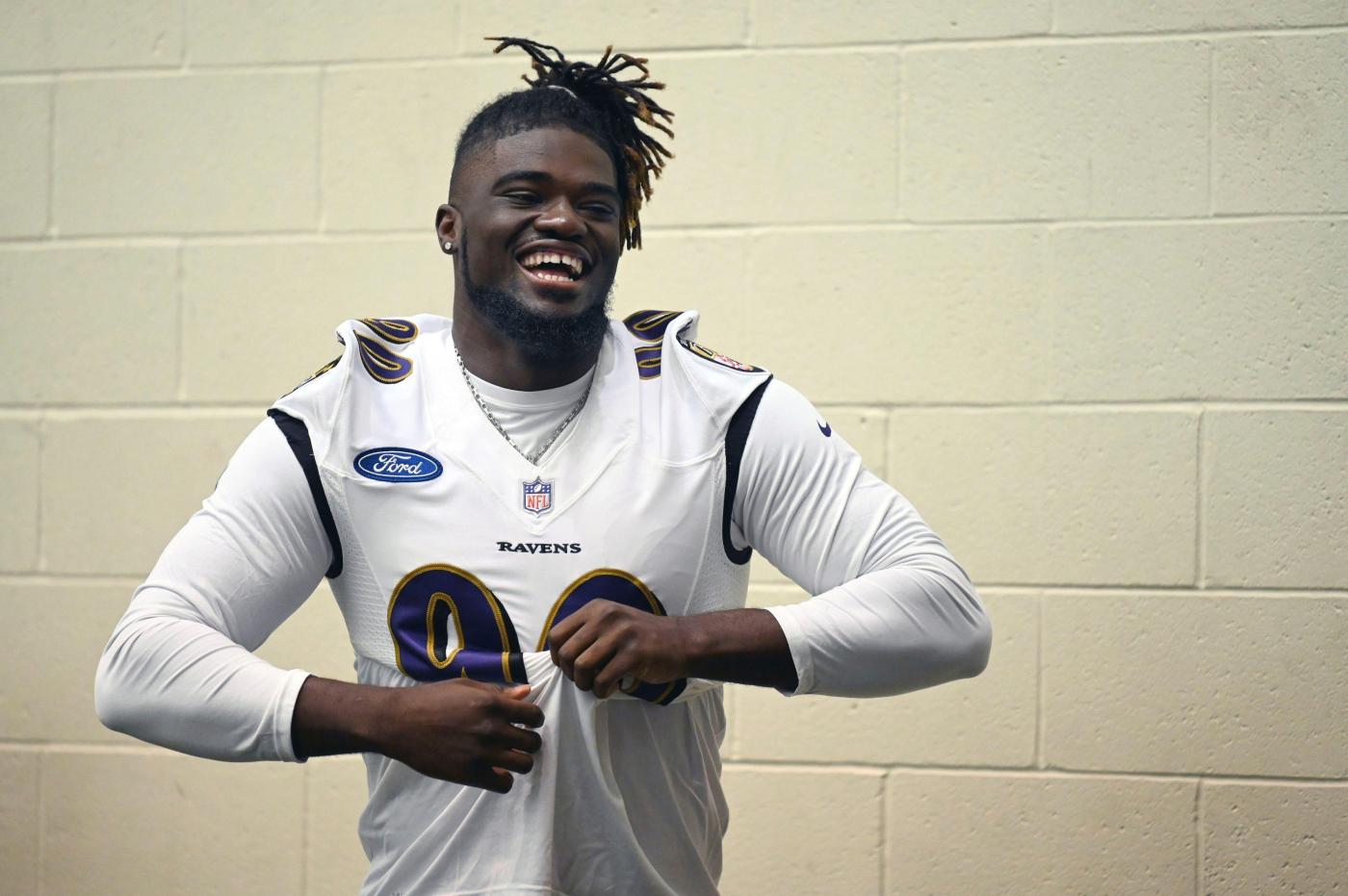 At age 15, more than 3,000 miles from his family, David Ojabo found comfort in food.

At Blair Academy in New Jersey, not much connected Ojabo to his roots. But at the boarding school, he’d met a friend whose parents, like his, are descendants of the Igbo people in southeastern Nigeria. The friend, Odafe Oweh, said that connection made them family. Before long, Ojabo found himself being treated to homemade Nigerian dishes, hand-delivered by Oweh’s parents from over an hour away.

“All he ate was Nigerian food,” Oweh said of Ojabo, who spent the first seven years of his life in Nigeria, moved to Scotland and then traveled to the United States with his family’s blessing early in high school. “He had no one else who was Nigerian that he knew. He asked me if my parents could bring him some stuff, and that’s where it kind of started.”

That was just the beginning for Ojabo and Oweh. Five years later, their parallel paths — basketball standouts turned football prospects who captivated college recruiters and NFL scouts alike — would converge once more, reuniting them as foundational pieces on the Ravens’ revamped defense. But it is their shared history that has made their future so bright.

‘I can’t even block a shot’

Before coming to the U.S. at age 15, Ojabo was an elite basketball player in Scotland. The 6-foot-5 teenager was bigger and stronger than his peers, even against stiffer competition at Blair.

“I’ve never seen a guy dunk so easily off the [vertical] at 6-foot-5,” former basketball teammate Gabe Ravetz said. “It felt like he was 6-foot-10 when you played against him in practice.”

But during Ojabo’s sophomore season, he realized the talent level in the U.S. was “night and day” compared with Scotland’s, as he had never seen 7-foot players with guard-like ball-handling skills. To make matters worse, the Buccaneers faced some of the top players in the nation, such as current Golden State Warriors rookie Jonathan Kuminga.

Ojabo, who also played soccer and ran track, was a superior rebounder, but he wasn’t dominating like he used to. He was the 10th man in a rotation of eight or nine Division I basketball players, including Oweh, who was the sixth man, according to Blair coach Joe Mantegna.

Ojabo knew he wasn’t going to be the next LeBron James, and watching Oweh excel in his first season of organized football — totaling 42 tackles (five for loss) and seven sacks — gave him the belief that he could do the same.

But Oweh never would’ve played football if it weren’t for former Blair coach Jim Saylor. After Oweh was kicked off the basketball team at Rutgers Prep as a junior because he yelled at the coach, he reclassified at Blair in hopes of getting college offers and eventually reaching the NBA. But when Saylor spotted Oweh touring campus, he had other plans.

“[Saylor] asked me what I played, and I said basketball,” Oweh said. “He was like, ‘Yeah, you got to play football.’”

Even though Oweh was a solid basketball player for two seasons, he quickly developed into a star on the football field. After just one season, Oweh picked up a scholarship offer from Rutgers, whose defensive line coach was enamored with his raw athleticism. He developed into a consensus four-star recruit, commanding the attention of top college programs like Penn State, Alabama and Ohio State. But it came at a cost.

During Oweh’s senior year, his recruiting visits cut into his practice time with the basketball team, so he had to make a choice.

“You can either go to college for basketball, play four years, be a decent starter and then find a job somewhere else, or go to the NFL and make money with this football stuff,” Mantegna told Oweh.

‘I copied everything he did’

While Oweh had a basic understanding of football, having grown up in the U.S., Ojabo was clueless when he started. Ojabo didn’t know what a hash mark was, or how to strap on his helmet or get into a three-point stance. Saylor said Ojabo would practice two to three times a day so that he could catch up in the two weeks before the first game of his junior season.

“After three days, he could barely walk because of getting into a three-point stance because his body and muscles had to adjust,” Saylor said. “I think he took a day or two off practice because of how sore he was from getting into football positions.”

Ojabo leaned on Oweh for guidance, even though he was still learning. The hours they spent learning about pad levels, playing defensive line, watching football highlights and envisioning the type of players they wanted to become served as a perfect illustration of their friendship.

“I copied everything he did,” Ojabo said. “If a guy is having success, I don’t know why you wouldn’t follow his lead.”

In Ojabo’s first year of organized football, he totaled 35 tackles, six sacks and two forced fumbles in seven games. Meanwhile, Oweh registered 60 tackles with 13 sacks while being selected to play in the Under Armour All-America Game. And just like Oweh, Ojabo landed his first football scholarship offer from Rutgers.

In the spring, Ojabo continued to showcase his tremendous athleticism, winning the 100-meter dash in the 2018 state prep track and field championship with a personal-best 10.93 seconds. “He was so athletic,” Saylor said.

Oweh went off to Penn State, and Ojabo returned for his senior season at Blair with newfound confidence. Ojabo tallied 33 tackles, 8 1/2 sacks and one forced fumble while impressing the coaching staff with his speed, athleticism and burst off the line of scrimmage.

“He made some plays during his senior year where you were like, ‘Holy cow, did he just do that?’” said current Blair football coach Greg Bowman, who was the defensive coordinator at the time. “His understanding of the sport skyrocketed.”

A consensus four-star recruit in the Class of 2019, Ojabo signed with Michigan, choosing the Wolverines over Oweh’s Nittany Lions.

‘This could really happen’

Despite Ojabo’s success at Blair, he played in only six games in his first two seasons at Michigan. But when Mike Macdonald became the Wolverines’ defensive coordinator in 2021 after seven seasons with the Ravens, he saw Ojabo’s immense potential.

“We saw a 6-4, 6-5 guy that could fly, and we’re like, ‘Well, why don’t we just get this guy to rush the passer every down?’ And it worked out for us,” said Macdonald, who took over for Don “Wink” Martindale as Ravens defensive coordinator this offseason.

Ojabo came alive as a junior, totaling 35 tackles (12 for loss), 11 sacks and a school-record five forced fumbles. He was named a second-team All-American by the Associated Press while helping the Wolverines reach the College Football Playoff alongside fellow edge rusher Aidan Hutchinson, the No. 2 overall pick in April’s draft by the Detroit Lions.

“Y’all got to understand how nice this man is going to be,” Oweh said. “He got 11 sacks off pure athleticism.”

As Ojabo became one of the most menacing edge rushers in college football, he constantly told Oweh, who was playing in his rookie season with the Ravens, “I’m going to meet you there.”

Despite tearing his Achilles tendon at Michigan’s pro day, leading him to fall out of the first round of the NFL draft, Ojabo was able to team up with Oweh once again when the Ravens selected him 45th overall.

“As I watched the draft unfold, I sat there and said, ‘Oh, my gosh, this could really happen,’” Bowman said. “This story keeps getting better.”

If you ask the basketball and football coaches at Blair, they would call Oweh and Ojabo’s reunion in Baltimore the perfect movie script. For Oweh and Ojabo, their journey to Baltimore was destined.

“[Oweh’s] part of my story,” Ojabo said. “Every opportunity I have, I let him know that he put me on.”