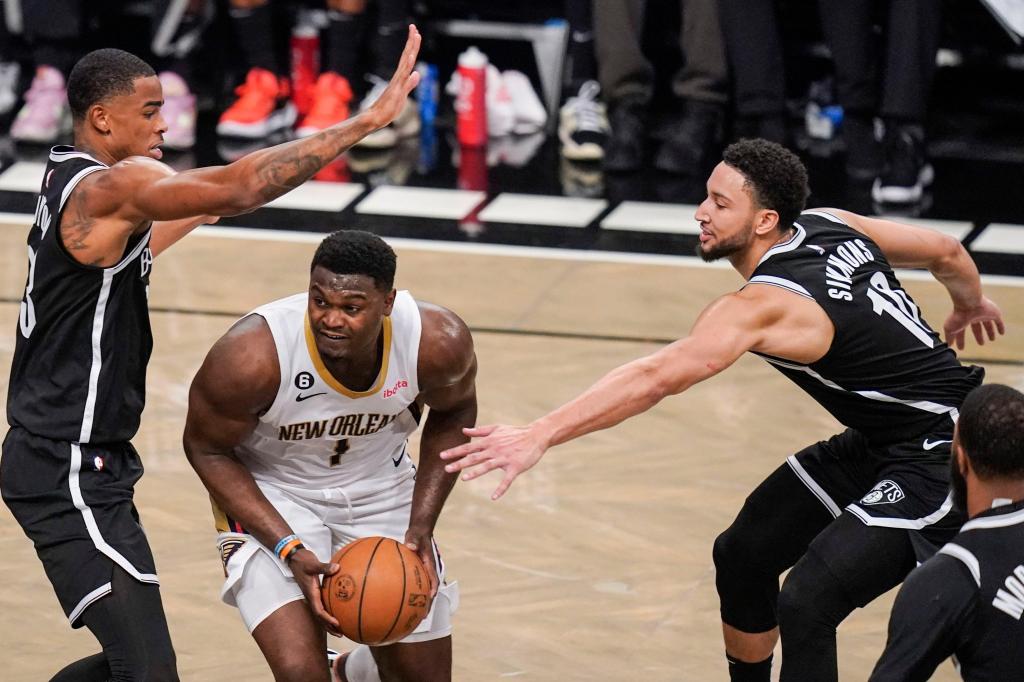 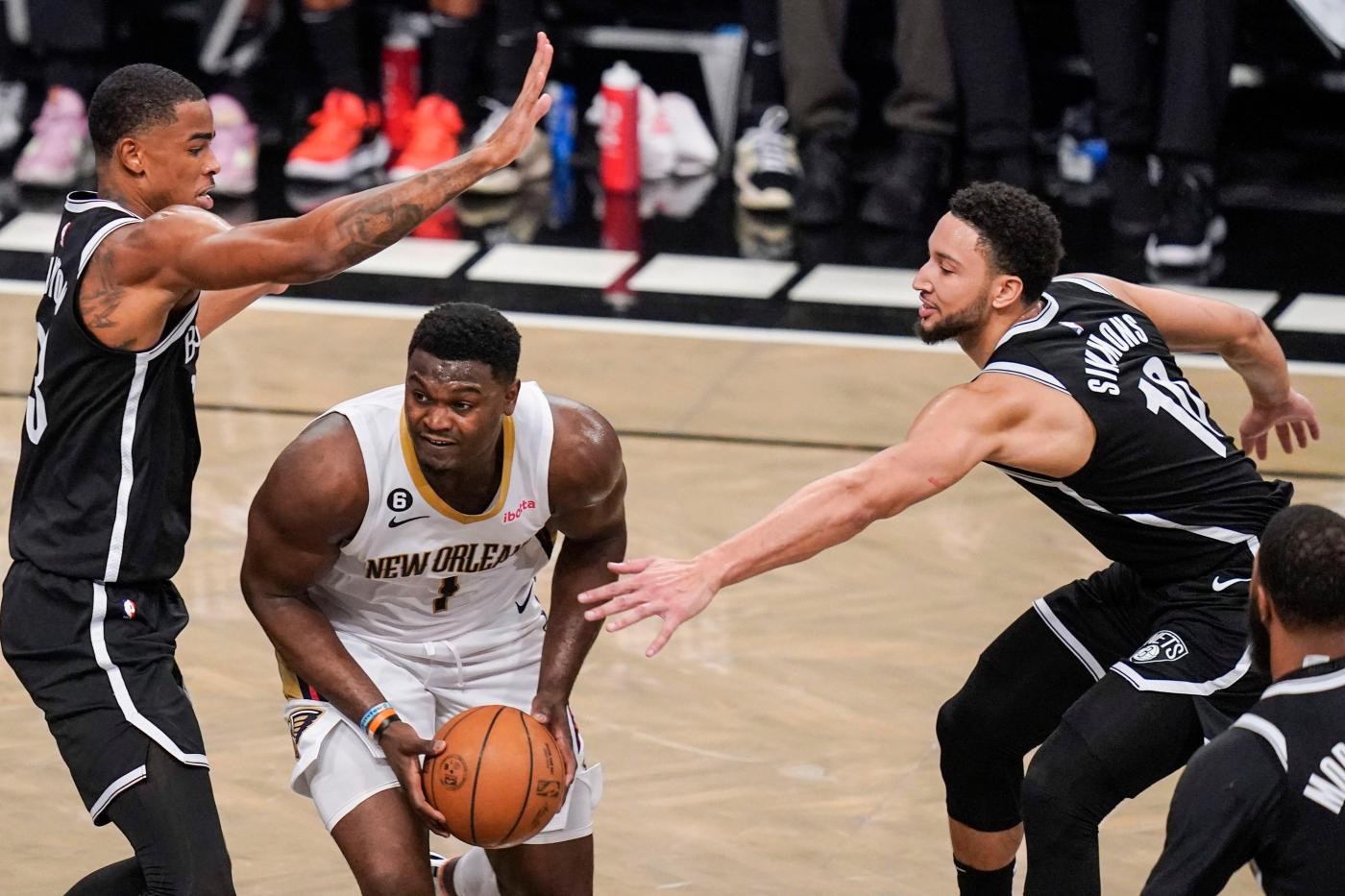 Kevin Durant said he wanted to “beat the snot out of” the New Orleans Pelicans in the season opener.

It was the Pelicans who did the beating and the Nets who left boogers all over their home floor.

The Nets walked out of Barclays Center battered, bruised and with their tails between their legs after taking a thumping on opening night. They never led, only held the momentum once — when cutting into the deficit entering halftime — and trailed by as many as 26 in their 130-108 loss to the Pelicans on Wednesday.

“They beat us in every category tonight,” head coach Steve Nash said after the game. “It’s really about the competition level and raising it now that the season’s here, and that was a great kind of warning shot of what the standard is.”

There’s a lot to take away from a game the Nets (0-1) lost in, as Nash said, every category. For starters, they don’t have the size to truly compete with bigger teams, as evidenced by the Pelicans’ 22-board advantage in the rebound margin and the whopping 36-4 disparity in second-chance points.

Nets general manager Sean Marks chose not to go after a lumbering big man this past offseason to give the Nets the size they lost when Andre Drummond signed with the Chicago Bulls. While the Knicks had signed seven-footer Isaiah Hartenstein — who filled in nicely in his opener against Grizzlies’ bruiser Steven Adams while Mitchell Robinson was in foul trouble — the Nets started Nic Claxton and brought second-year big man Day’Ron Sharpe off the bench.

Jonas Valanciunas is one of the strongest centers in all of basketball, and ‘ Williamson’s size and strength precedes his name. The Pelicans ultimately out-rebounded the Nets, 61-39, a margin equivalent to the 22-point deficit in the final score.

“[We’ve got to] box out, put a body on people, not let them get in our paint on defense,” Durant explained after the game. “You let a team get in your paint, you leave your guys on the perimeter, now they’re crashing for the glass, so we’ve got to keep the ball out the paint. [If] they’re shooting over us, then their team’s got no choice but to get back on defense instead of crashing, so we’ve just got to keep teams out of the paint.”

The Nets don’t appear to have a satisfactory answer for what they can do differently in future matchups against other big teams, because boxing out doesn’t always work when the opponent is flat-out stronger. Those mis-matchups are going to come often given the landscape of the Eastern Conference: the Bucks, Celtics, 76ers and Cavaliers are each bigger than the Nets, and each of those teams project to stand in-between their championship hopes.

Aside from the rebounding disparity, there was a clear drop-off in effort — as in the Pelicans flat-out outworked the Nets all night long. It was more of the same from last season, and the season prior, where the Nets wouldn’t bring the fight until an opponent punched them in the mouth.

“This is a grown man’s league and the most physical team wins, and New Orleans came in with intent to show us why they’re going to be in the hunt for championships in the next few years,” Kyrie Irving said postgame. “They have a good foundation with Brandon Ingram and Zion [Williamson] and then add in a defensive-minded player like Herbert [Jones] and [then] CJ McCollum and they all were clicking tonight. You see just the spread out of the scoreboard. They did everything.”

Which brings us to the worst part of the night: unfortunately, it was Ben Simmons.

Simmons fouled out after just 23 minutes and totaled only four points, five rebounds and five assists. He did not look like the player the Nets envision as the engine both on offense and defense. Instead, that engine sputtered and the Nets broke down.

Simmons, of course, was playing in his first official regular season game in over a year after sitting out the entire 2021-22 NBA season citing mental health issues and a lower back injury that required offseason surgery. He, his teammates and the organization are bullish on a season where, like fine wine, he will gradually improve as the season progresses..

“It takes time. Having back surgery and being away from the game for a year, there’s little things that your mind might tell you to go do something, but your body’s not wanting to go do that,” he said postgame. “But those are the habits, that’s something that I just need to continue to focus on and be aggressive regardless of the result.”

As of now, time is on the Nets’ side. This was only Game 1 of 82, and the Nets missed two key players — sharpshooters Joe Harris (foot soreness) and Seth Curry (ankle surgery rehab) — as well as a wild card in rehabbing forward T.J. Warren (foot injury rehab).

The loss — the lopsided nature of their defeat, that is — is a reminder that this season won’t be a walk in the park. The Nets have all the talent on paper, but it’s going to take a year’s worth of games to build the chemistry and cohesion needed to beat the league’s elite.

It’s possible, as long as they don’t fracture from within during the rough stretches.