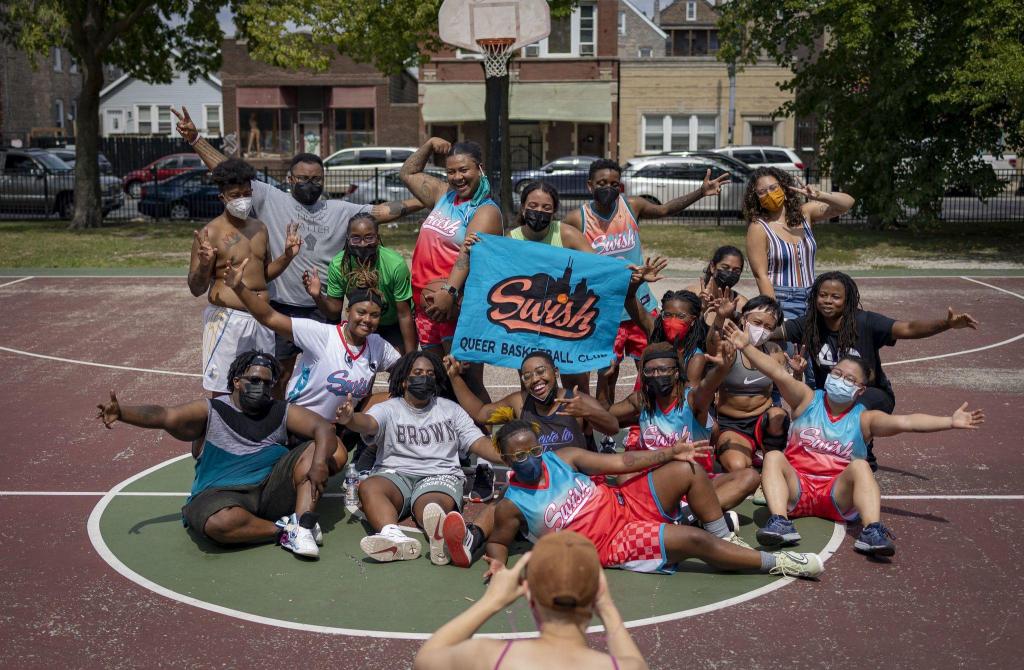 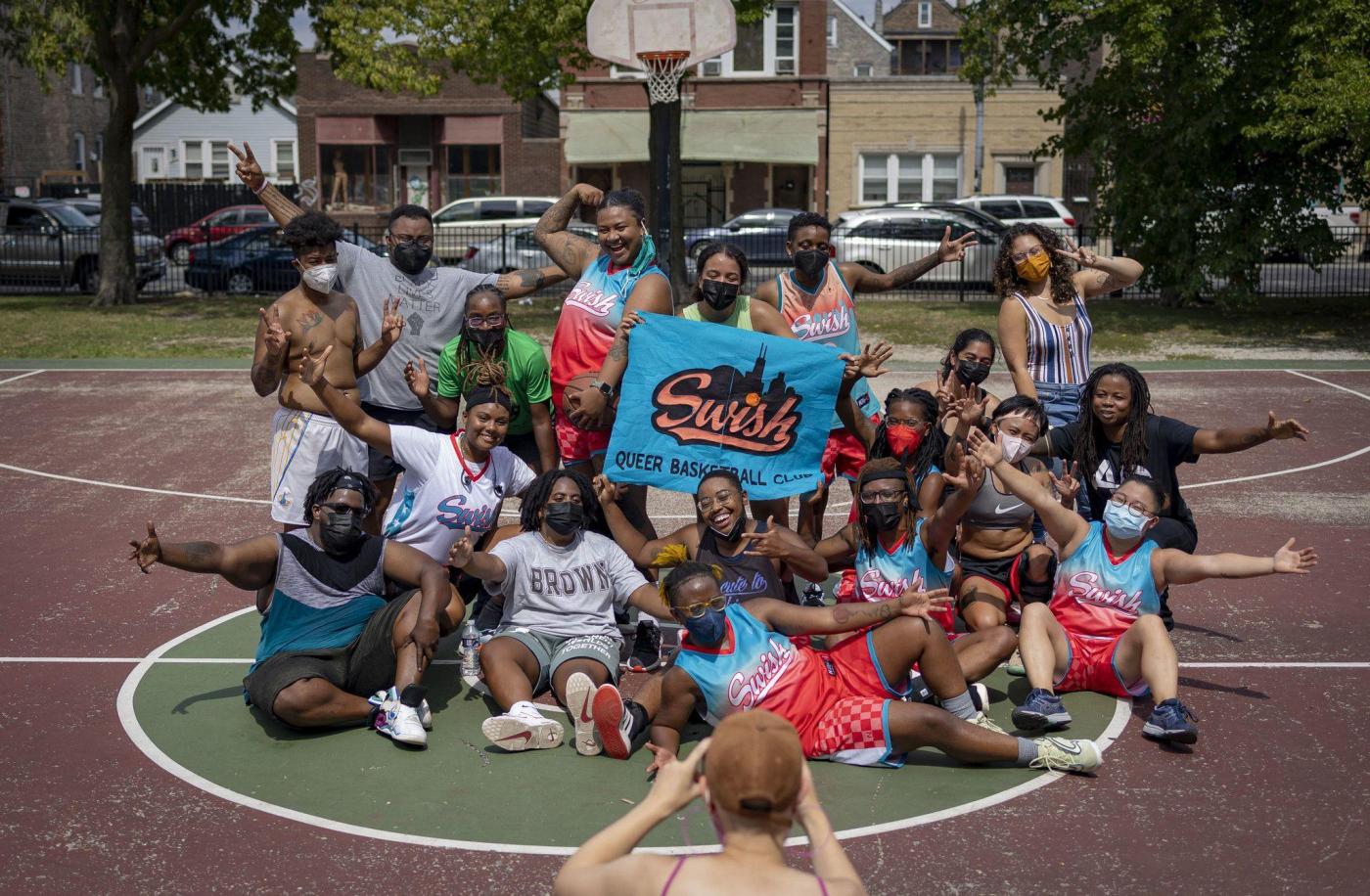 On a Sunday afternoon at Harrison Park in Pilsen, the members of the Swish basketball organization are guaranteed to clap for one play: an air ball.

An average Swish session follows the paces of a typical practice: warmups, dribbling drills, shooting exercises, scrimmages. But that’s not the point of the organization, which seeks to connect the queer Black Indigenous and People of Color (BIPOC) community with basketball.

For founder Jamiece Adams (she/her), Swish goes beyond scoring — it’s about creating a space that previously didn’t exist in Chicago.

“Basketball is about community at its core,” Adams said. “That’s what we’re about. Swish is committed to creating a brave, safe space where we think critically about how to make a space inclusive, about how we hold people, see people and value people in a way that makes them feel good.”

As an organization, Swish is centered on queer joy. It began in 2021 as a product of grief. In the midst of the COVID-19 pandemic and the wake of her close friend’s death in a car accident, Adams was longing for both community and a physical outlet. So Adams returned to an idea she had been tossing around for years — starting a basketball league for the queer BIPOC community in Chicago.

It started as a pickup game. Adams connected with T Banks (she/they), who was friends with Isharah (they/them) and trained Zipporah Jarmon (she/her) — a group that would eventually become the founding group and board for Swish — to play ball at a local park.

Jarmon wants it to be clear — Swish wasn’t born out of highly competitive basketball. Practice had been fairly impossible during the pandemic, and that initial hoops session was mostly about brushing off the rust. Jarmon, for her part, swears they still gave the rest of the group buckets.

But the joy for the sport ignited in that first meetup was enough to sustain Swish from a concept to a full-on creation.

“We were struggling,” Jarmon said with a laugh. “But what we knew that day was that it was something special. We walked away feeling connected. We wanted to play again. I think we knew at that moment that we could build a community that didn’t exist (in Chicago) before.”

Chicago is known for basketball. But for trans and nonbinary athletes, playing pickup with cisgender men can range from uncomfortable to dangerous. Ishara spent a childhood in Alabama harassed by parents whenever they attempted to play in park leagues. Swish member AJ Domingo (they/them) was used to playing pickup with cis men but described the experience as competitive, with a focus on winning rather than community that often left them feeling excluded.

That request is incongruous with the nonbinary experience, which can’t be squashed into whichever gender is most convenient at the moment. It reflects the way traditional LGBTQ spaces still fail many members of their communities — and a status quo that Swish aims to divert.

“There’s so many spaces where I feel like I had to shrink myself down just to fit in,” Domingo said. “But here I’m my full self. I’m nonbinary and queer and everyone knows that and embraces it and celebrates it.”

Many LGBTQ spaces in Chicago are centered on the North Side and skew toward a white, cisgender segment of the LGBTQ population that doesn’t reflect the community at large. When members of Swish sought out these spaces, they often left feeling marginalized by a community meant to be their own.

Adams and her fellow Swish founders aimed to create something different in Swish. That required intentional attention to detail. Swish sessions open with the repetition of an agreement, which includes a promise to “combat ableism, transphobia, homophobia, racism, classism, xenophobia and other harmful systems.” Members readily share pronouns as part of their introductions. Masks are required to maintain accessibility during COVID-19.

Although it began as a close-knit group of friends, Swish became a true community when the group began to attract newcomers through social media. New members shared a common trait — a desire for intentional acceptance.

“I was having a hard time finding people that I really felt like I clicked with,” Ash Davis (they/them) said. “I felt like I would always see the white queer community put first, but with Swish it was so adamantly pro-Black, pro-trans, pro-queer right up front. There are so few spaces meant for us, built for us. When you find one, it feels like home.”

For Adams, the main goal of Swish is to build community — but it’s also a space for members to reignite a passion for the game.

Many Swish members share the same story. Basketball used to be a central point in their life, but at some point they fell out of it. Sometimes that was due to bigotry in the locker room or on the court, but more often than not it was due to the common failings of modern sports: commandeering coaches, a career-ending injury, the crush of daily life.

“Basketball was my first love,” Nat Savoy (they/them) said. “I’m pretty sure it was everyone else here’s first love too. This is where we can fall back into that as our whole selves.”

Some players such as Davis hadn’t picked up a basketball since sixth grade; others — Amber Lara and Marseille Chislom — played in college but fell out of love with the game when their careers ended.

Swish will never aim be a competitive club or league. Sessions start with stretches and drills, then break off into shooting games and scrimmages. Everything is centered on enjoyment. For newcomers and veteran players alike, this approach was a refreshing experience.

“It was this transcendent emotion that literally took me from being in my 30s to being dropped back into my teens,” Chislom (she/her) said. “It’s like, ‘Wow, I feel like a kid again.’ ”

In the summer, Sunday sessions with Swish adopt the sunny atmosphere of a picnic — music thumping from a speaker, bags of chips strewed on a folding table, partners and family members lounging in camp chairs on the sidelines of an outdoor court at Harrison Park in Pilsen.

But finding a space to play basketball in the midst of a Chicago winter is a whole different challenge.

That’s where the Chicago Bulls came in. Swish first landed on the Bulls’ radar last year when vice president of community relations Adrienne Scherenzel-Curry discovered the group’s Instagram page. Under the guidance of director of community relations Erica Bauer, the Bulls fostered a relationship with Swish — providing basketballs and other equipment, sponsoring an anniversary dinner and featuring the group in a 3v3 tournament at BullsFest.

Bauer’s most important endeavor was to help Adams and the Swish board secure winter sessions at 167 N. Green St. The glittering indoor court — located on the 17th floor of a Fulton Market office building and ensconced in windows overlooking downtown Chicago — previously was frequented by stars such as Zach LaVine and celebrities such as Justin Bieber. With a sponsorship from the Bulls, it also became a home base for Swish winter sessions.

As a queer Black woman, Bauer believes it’s a prerogative for the Bulls and other NBA teams to utilize their resources to create a safe, supported space for groups such as Swish that promote basketball in queer BIPOC communities.

“There’s this history to professional athletics and the NBA that is very hypermasculine,” Bauer said. “So it’s important for (the Bulls) to utilize our platform and use our megaphone to always shine a light on groups of people that ordinarily don’t get any access to it. Swish is a group representing a hypermarginalized group within a marginalized group, so it’s even more important for us to figure out how we can infuse more love and resources into an organization like this.”

In its second year, Swish has become as vibrant a community off the court as on it. Domingo brings their partner and children to the park for pickup sessions. When Savoy landed a role in a local production of “Sister Act,” Swish members took up multiple rows in the audience on opening night. If rain prevents an outdoor session in the summer, the group goes bowling instead.

Adams continues to find new ways to branch out, partnering with organizations such as froSkate to try new sports and Party Noire to write letters to Brittney Griner during her imprisonment in Russia. Members of the leadership board have lofty goals — sibling branches in other cities, charity events, clinics for kids.

But the heart of Swish’s purpose remains the same: carving out a space on the basketball court for bravery and acceptance.

“I didn’t have this space growing up,” Banks said. “A lot of us being queer didn’t have these experiences or spaces. To be able to bring that childlike joy to a sport as an adult — what a beautiful, empowering thing that is, to do that and connect in this intentional space.”