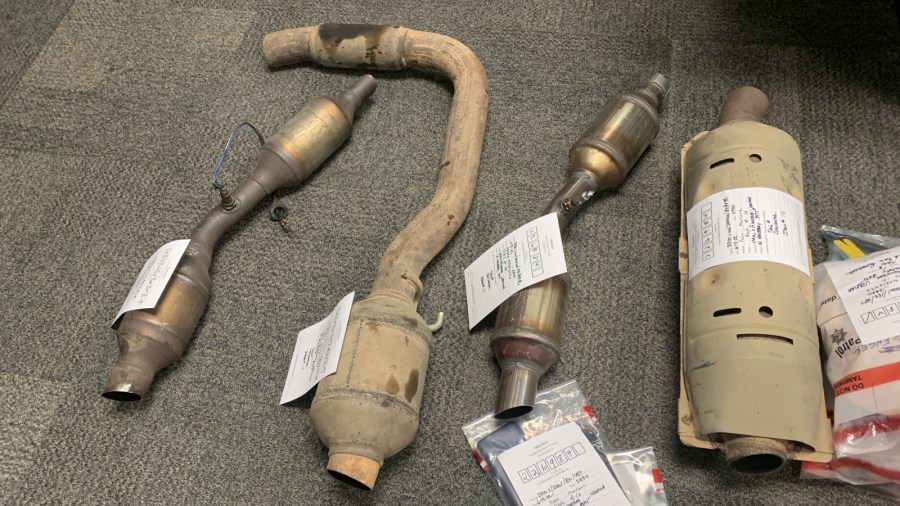 Four people from the Los Angeles area were taken into custody Monday night after a high-speed pursuit that began in Santa Barbara County and ended in Ventura.

Santa Barbara County Sheriff’s deputies were dispatched to a neighborhood in Goleta around 10 p.m. for a report of a possible catalytic converter theft that had just occurred.

When deputies arrived on scene, they immediately located the suspect vehicle which was fleeing the scene.

Deputies attempted to pull the vehicle over, but the driver did not obey, instead taking off on the 101 Freeway at a high rate of speed. Deputies gave chase at first but eventually terminated the pursuit due to the high speeds and safety concerns.

Deputies in Carpinteria, which is south of Goleta on the other side of Santa Barbara, picked up the pursuit when the vehicle reentered Sheriff’s Office jurisdiction.

Again the vehicle sped off at high speeds and deputies were forced to terminate the pursuit, according to the Sheriff’s Office.

As the vehicle crossed over into Ventura County, the Ventura Police Department and the California Highway Patrol began to provide assistance in the pursuit.

The vehicle continued to drive at a high rate of speed as it left Highway 101 and drove through downtown Ventura. The driver continued to evade law enforcement until their vehicle crashed into a “fixed object’ in the area of Main and Figueroa streets.

Four people fled from the crashed vehicle, but were quickly apprehended by law enforcement from both counties.

The four suspects have been identified as Saul Tamayo, 32, Wilber Rabanales, 37, Pedro Martinez, 32, and Edith Godinez, 33. All four people are residents of the Los Angeles area, according to the Santa Barbara County Sheriff’s Office.

The four were booked into the Santa Barbara County Main Jail in Santa Barbara and face possible felony charges for grand theft, eluding law enforcement, hit and run and conspiracy.

Tamayo and Rabanalez were found to have outstanding arrest warrants and were kept in custody. Martinez and Godinez were released without bail due to local COVID-19 emergency bail scheduling.

A search of their vehicle found more than a half-dozen stolen catalytic converters and burglar tools, the Sheriff’s Office said.

The Sheriff’s Office will now begin the process of identifying the owners of the stolen car parts.

Drivers are also encouraged to park in well-lit areas or leave their cars in a garage if possible.