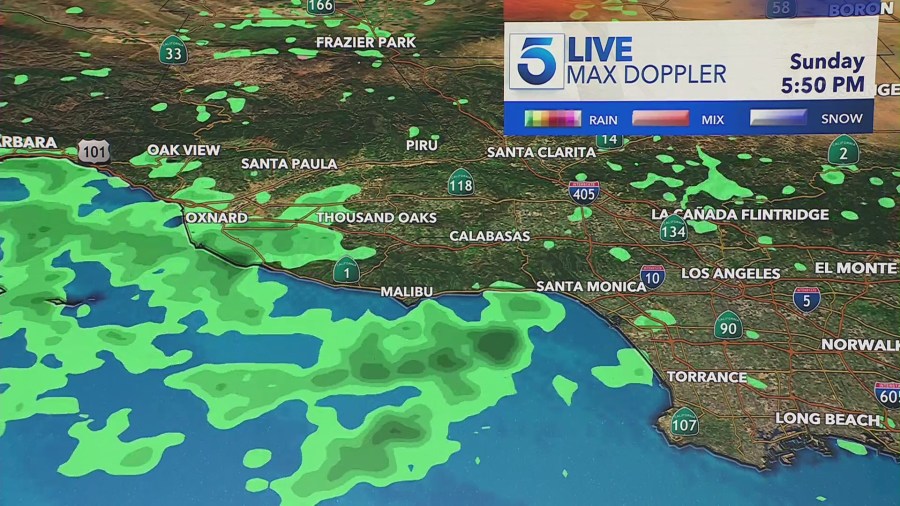 Yet another “strong Pacific storm” is expected to hit Southern California Monday and is forecast to bring gusty winds, potential flooding and hazardous driving conditions, the National Weather Service reports.

The latest weather is a part of the same system that left as many as 300,000 people in Sacramento and surrounding counties without power Saturday night into Sunday morning.

Here in SoCal, the heaviest rains are likely Monday afternoon through Tuesday and could cause mud and debris flows in and around recent burn scar areas, as well as downed trees and power lines, the weather service said.

Rain totals for the first two days of the week are expected to be 2-5 inches on the coasts and in the valleys. Mountain and foothill communities may see as much as 5-9 inches of rain.

The weather service has also issued a flood watch for Orange County, the Inland Empire and San Bernardino and Riverside County Mountains.

Snow is expected at elevations of 7,500 feet and higher.

The NWS also expects strong southerly winds, with gusts in the central coast hitting 50-60 miles per hour and gusts as powerful as 60-70 miles per hour in the mountains.

Experts are warning of more dangerously high surf which led to closed beaches, ongoing warnings and advisories, and damaged piers along the California coast from last week’s bomb cyclone.

In Ventura Harbor, crews were working to clear docks that had been broken apart after big swells sent waves into surrounding channels, leading to some $200,000 worth of damage.

Both mariners and beachgoers are encouraged to always use caution.

Commuters should be aware of hazardous driving conditions, such as flooded roadways and reduced visibility, especially during thunderstorms.