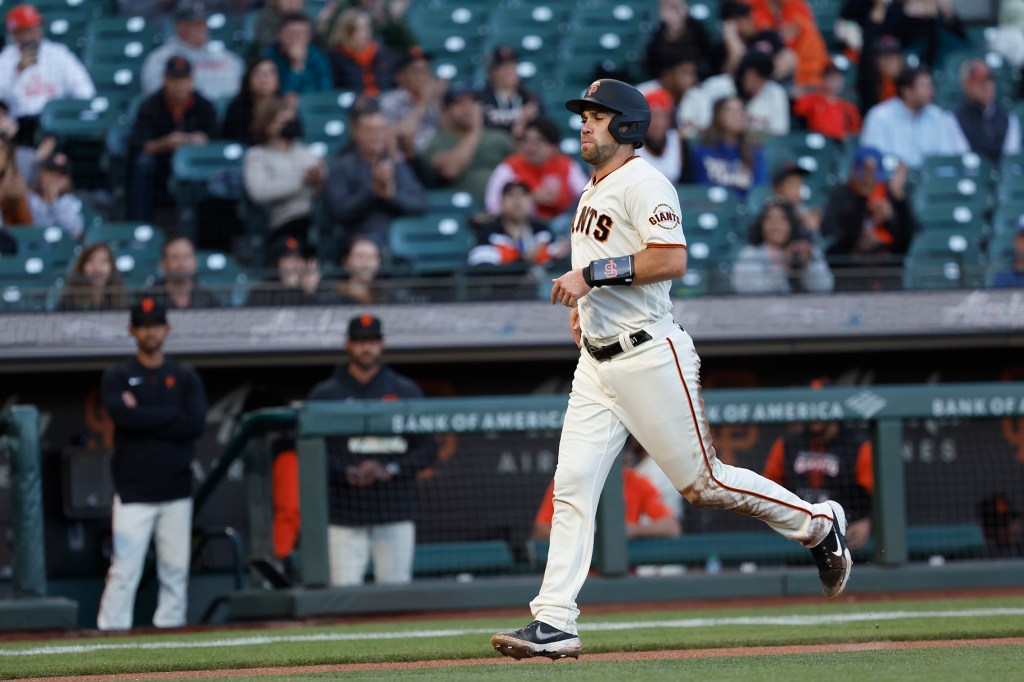 SAN FRANCISCO — Some of the Giants’ favorite hitting metrics revolve around their ability to control the strike zone.

Never was that more apparent than in the third inning of their 6-2 win to open their three-game series with the Kansas City Royals.

After making two outs, the Giants loaded the bases and scored two runs while getting just one base hit. Royals starter Brady Singer issued four straight free passes that forced in both runs.

All it took to secure a fourth straight victory and continue their momentum from a weekend sweep of the Dodgers was a mini-rally in the sixth, which — you guessed it — was kickstarted with a leadoff walk.

The Giants drew a season-high nine walks Monday night, including five from the Royals’ starter, who in five previous starts this season had shown among the best command in the majors. Only two qualified starters had a lower K/9 than Singer’s entering Monday night, but only four teams had a higher BB% than the Giants.

In four consecutive batters in the third inning, Singer matched his season total of free passes (4 in 35⅓ innings).

After catcher Austin Wynns snuck a two-out double down the right-field line — his fifth hit in three games and his first for extra bases — Singer all but lost his ability to find the strike zone. He lost Luis González after working a full count, then threw 12 of his next 13 pitches outside the strike zone, walking Mike Yastrzemski, then Darin Ruf, then Joc Pederson. The walk parade forced home Wynns and Yastrzemski and tied the game at 2.

The Giants took the lead in the sixth after Austin Slater, pinch-hitting for Pederson, took ball four and scored on Thairo Estrada’s line drive single into center field. The RBI single extended Estrada’s hitting streak to a team-high six games.

Brandon Crawford padded the lead in the seventh with a two-RBI double down the right-field line that cleared the bases, driving in Ruf and Slater. Ruf reached when he took ball four with one out for the Giants’ eighth walk of the night, tying their season high (May 7 vs. STL), then Slater immediately followed with their ninth free pass.

It was the second straight time through the order that the Ruf and Slater drew back-to-back walks. In the third, Crawford ended the rally with a bases-loaded fly out to center. But in the seventh, he laced a line drive that hugged the foul line, driving in a pair of insurance runs.

González manufactured another run himself in the eighth to make it 6-2, stretching a single into a double, stealing third base and scoring when the throw from catcher M.J. Melendez soared past the bag and into left field.

In all four games of the Giants’ win streak, they’ve held opponents to two or fewer runs.

On Monday, Alex Wood needed only 80 pitches to make it through six innings, but manager Gabe Kapler decided to turn the game over to the bullpen, which after three more scoreless innings against the Royals has allowed one earned run in its past 16 innings of work.

Wood allowed the leadoff man to reach in each of the first three innings, but the only damage the Royals were able to do came in the third, after Carlos Santana led off with a walk and Emmanuel Rivera followed with a double, and both came home to score.