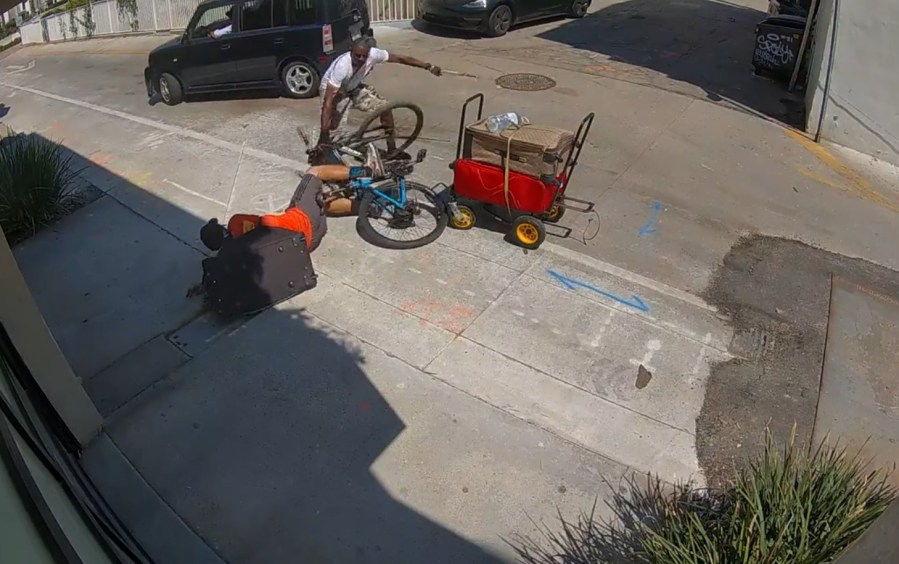 One man in Venice is without a bicycle, while another man has reclaimed the bike he claims is his, after a violent altercation around midday Sunday.

In video shared with KTLA, one man can be seen riding his bike and pulling a cart loaded down with luggage in an alley near Speedway and Navy Street.

As the cyclist hears another man yell, “Give me my bike!,” he slows down and stops to refute the other man’s assertion.

As the cyclist begins to make his case, the other man, who is armed with what appears to be a stick or pipe, strikes the luggage with his weapon.

As the armed man continues to repeatedly shout, “Give me my bike!” and profanities, he grabs at the bike’s handlebars, dragging the cyclist to the ground.

The second man then pulls the bike away from the former cyclist and begins to walk away as passersby try to intervene on the victim’s behalf.

As the confrontation exits the screen, the victim remains lying on the ground, seemingly confused.

It remains unclear if the first man got his bicycle back or if the second man was correct in asserting that the bike was his. The Los Angeles Police Department did not have any information to share on the incident.