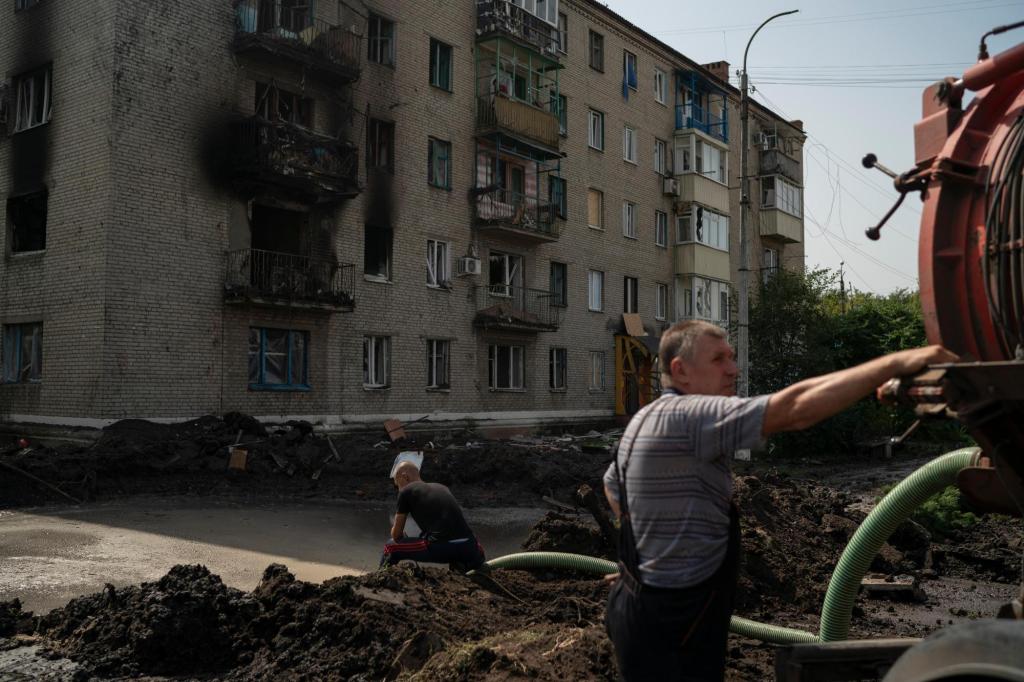 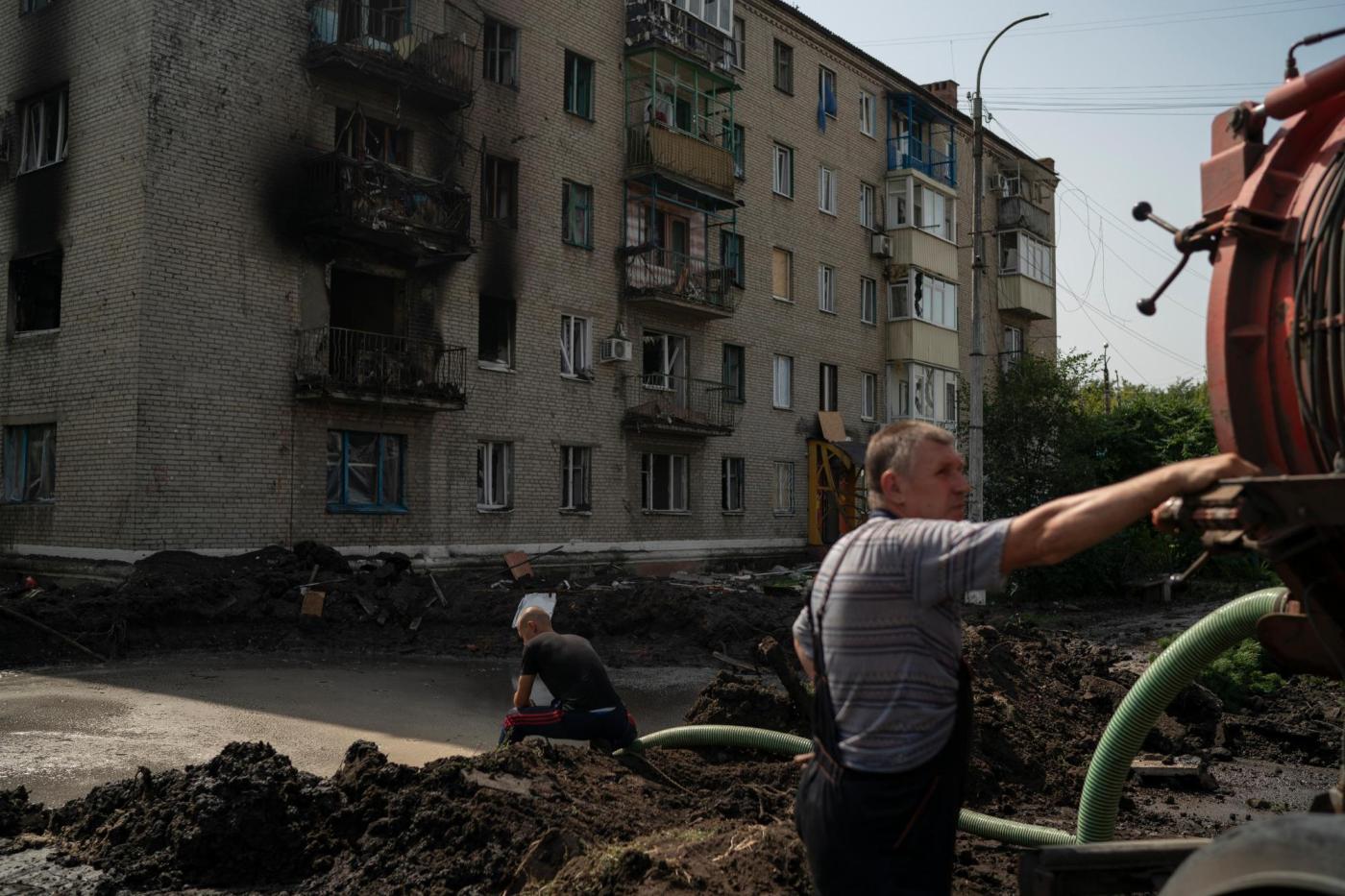 SLOVIANSK, Ukraine — Russia and Ukraine traded claims of rocket and artillery strikes at or near Europe’s largest nuclear power plant on Sunday, intensifying fears that the fighting could cause a massive radiation leak.

Ukraine’s atomic energy agency painted an ominous picture of the threat Sunday by issuing a map forecasting where radiation could spread from the Zaporizhzhia Nuclear Power Plant, which Russian forces have controlled since soon after the war began.

Attacks were reported over the weekend not only in Russian-controlled territory adjacent to the plant along the left bank of the Dnieper River, but along the Ukraine-controlled right bank, including the cities of Nikopol and Marhanets, each about six miles from the facility.

Russian Defense Ministry spokesman Igor Konashenkov said Sunday that Ukrainian forces had attacked the plant twice over the past day, and that shells fell near buildings storing reactor fuel and radioactive waste.

“One projectile fell in the area of the sixth power unit, and the other five in front of the sixth unit pumping station, which provides cooling for this reactor,” Konashenkov said, adding that radiation levels were normal.

The U.N.’s International Atomic Energy Agency also reported Sunday that radiation levels were normal, that two of the Zaporizhzhia plant’s six reactors were operating and that while no complete assessment had yet been made, recent fighting had damaged a water pipeline, since repaired.

In another apparent attack Sunday, Russian forces shot down an armed Ukrainian drone targeting one of the Zaporizhzhia plant’s spent fuel storage sites, a local official said. Vladimir Rogov, a Russian-installed regional official, said on the Telegram messaging app that the drone crashed onto a building’s roof, not causing any significant damage or injuring anyone.

Nearby, heavy fighting during the night left parts of Nikopol without electricity, said Valentyn Reznichenko, the Dnipropetrovsk region’s governor. Rocket strikes damaged a dozen residences in Marhanets, according to Yevhen Yevtushenko, the administration head for the district that includes the city of about 45,000.

Neither side’s claims could be independently verified.

The plant’s dam is a major roadway across the river and a potentially key Russian supply route. The dam forms a reservoir that provides water for the Zaporizhzhia nuclear plant.

The radiation map Ukraine’s nuclear agency Energoatom issued showed that based on wind forecasts for Monday, a nuclear cloud could spread across southern Ukraine and southwestern Russia. Release of the map may have been meant to warn that if Russian forces were responsible for a radiation leak, their own country would suffer. In the 1986 Chernobyl nuclear power plant accident, the world’s worst atomic energy catastrophe, radiation spread from Ukraine to several neighboring countries.

Authorities last week began distributing iodine tablets to residents who live near the Zaporizhzhia plant in case of radiation exposure. Much of the concern centers on the cooling systems for the plant’s nuclear reactors. The systems require electricity, and the plant was temporarily knocked offline Thursday because of what officials said was fire damage to a transmission line. A cooling system failure could cause a nuclear meltdown.

“There are risks of hydrogen leakage and sputtering of radioactive substances, and the fire hazard is high,” it said.

The IAEA has tried to work out an agreement with Ukrainian and Russian authorities to send a team to inspect and secure the plant, but it remained unclear when the visit might take place.

In eastern Ukraine, where Russian and separatist forces are trying to take control, shelling hit the large and strategically significant cities of Kramatorsk and Sloviansk, with no casualties reported, said Pavlo Kyrylenko, the Donetsk region’s governor. Konashenkov said Russian missile strikes killed 250 Ukrainian soldiers and reservists in and near Sloviansk. Ukrainian officials didn’t comment on the claim, in keeping with their policy of not discussing losses.

Sloviansk resident Kostiantyn Daineko told The Associated Press that he was falling asleep when an explosion blew out his apartment windows.

“I opened my eyes and saw how the window frame was flying over me, the frame and pieces of broken glass,” he said.

Russian and separatist forces hold much of the Donetsk region, one of two Russia has recognized as sovereign states.

“The invaders brought degradation and death and they believe that they are there forever,” Zelenskyy said Sunday in his nightly video address. “But it’s a temporary thing for them. Ukraine will return. For sure. Life will return.”

Follow AP’s coverage of the war in Ukraine at

Andrew Katell contributed to this report from New York.