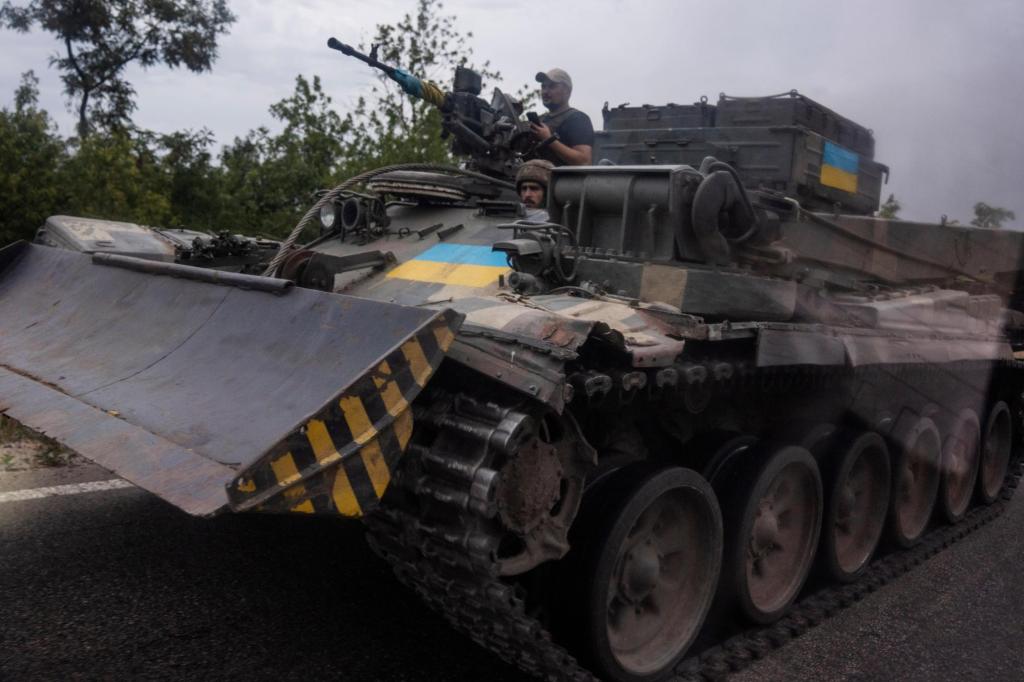 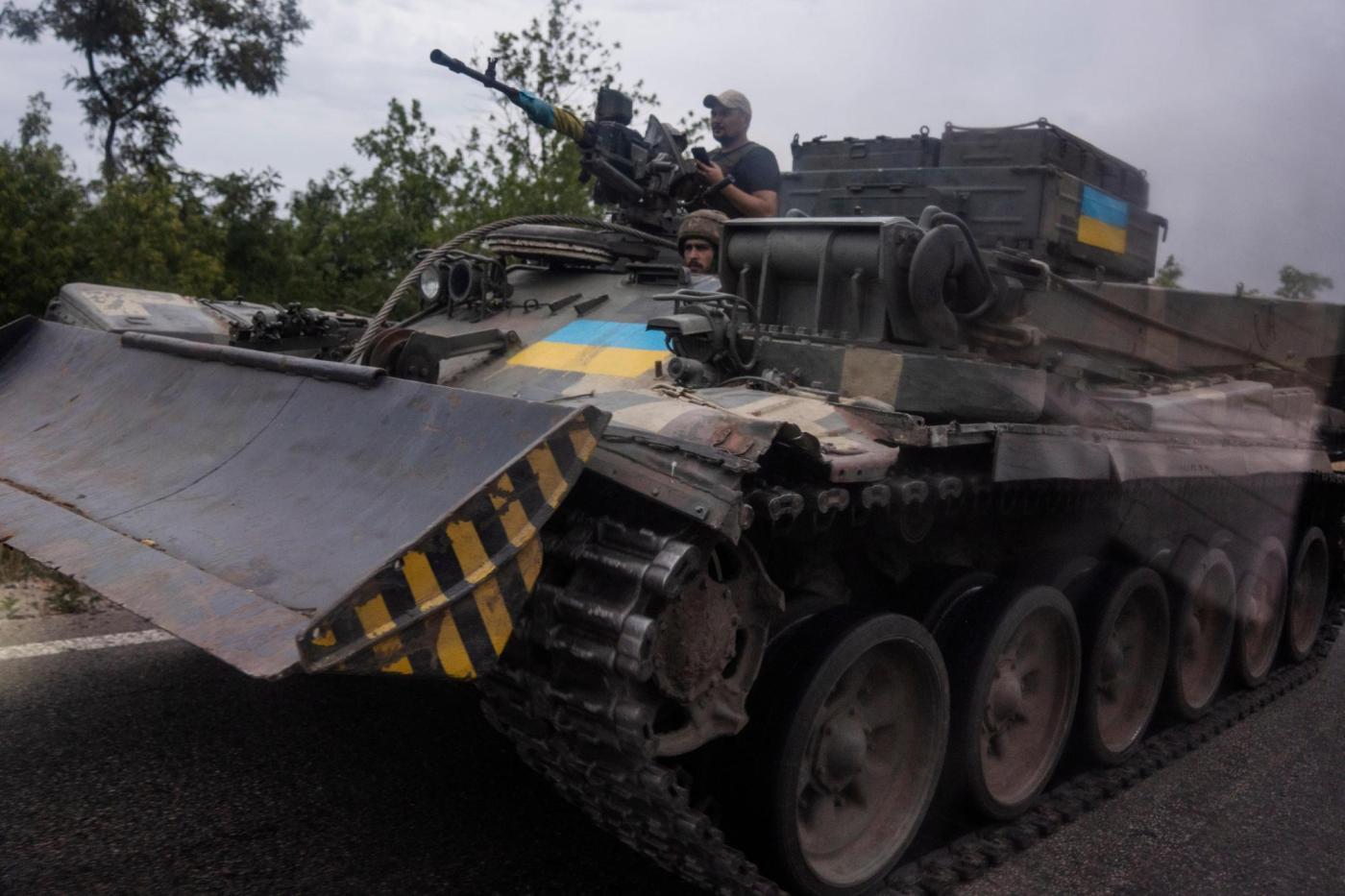 By HANNA ARHIROVA and CARA ANNA

VINNYTSIA, Ukraine (AP) — As Russia’s military pressed its efforts to expand into Ukraine’s east, Ukrainian President Volodymyr Zelenskyy fired the head of the country’s security service and its prosecutor general on Sunday, citing hundreds of criminal proceedings into treason and collaboration by people within their departments.

“In particular, more than 60 employees of the prosecutor’s office and the SBU have remained in the occupied territory and work against our state,” Zelenskyy said.

“Such an array of crimes against the foundations of the state’s national security, and the links recorded between Ukrainian security forces and Russian special services raise very serious questions about their respective leaders,’ he said in his nightly video address to the nation.

He dismissed Prosecutor General Iryna Venediktova, and replaced her with her deputy Oleksiy Symonenko.

The Russian military has declared a goal to cut off Ukraine’s entire Black Sea coast all the way to the Romanian border. If successful, such an effort would deal a crushing blow to the Ukrainian economy and trade, and allow Moscow to secure a land bridge to Moldova’s separatist region of Transnistria, which hosts a Russian military base.

Early in the campaign, Ukrainian forces fended off Russian attempts to capture Mykolaiv, which sits near the Black Sea coast between Russia-occupied Crimea and the main Ukrainian port of Odesa. Since then, Russian troops have halted their attempts to advance in the city but have continued to pummel both Mykolaiv and Odesa with regular missile strikes.

The Russians, fearing a Ukrainian counteroffensive, also sought to reinforce their positions in the Kherson region near Crimea and in part of the northern Zaporizhzhia region that they seized in the opening stage of the war.

The British Defense Ministry said Sunday that Russia is moving troops and equipment between Kherson, Mariupol and Zaporizhzhia, and increasing security measures around Melitopol.

“Given the pressures on Russian manpower, the reinforcement of the south whilst the fight for the Donbas continues indicates the seriousness with which Russian commanders view the threat,” it said.

For now, the Russian military has focused on trying to take control of Ukraine’s eastern industrial heartland of the Donbas, where the most capable and well-equipped Ukrainian forces are located.

Ukraine says its forces still retain control of two small villages in the Luhansk region, one of the two provinces that make up the Donbas, and are fending off Russian attempts to advance deeper into the second one, the Donetsk region.

The Ukrainian military’s General Staff said Sunday that Ukrainian troops thwarted Russian attempts to advance toward Sloviansk, the key Ukrainian stronghold in Donetsk, and attacks elsewhere in the region.

Yet Russian officials are urging their troops to produce even more territorial gains. During a visit to the front lines Saturday, Russian Defense Minister Sergei Shoigu issued an order “to further intensify the actions of units in all operational areas.”

The Russian military said it has struck Ukrainian troops and artillery positions in Donbas in the latest series of strikes, including a U.S.-supplied HIMARS multiple rocket launcher. The Russian claims couldn’t be independently verified.

“They will momentarily face Doomsday,” Medvedev said Sunday. “It would be very hard for them to hide.”

Medvedev, who once was touted by the West as more liberal compared to Putin, said Russia will press its action in Ukraine until fulfilling its stated goal of “denazifying” and “demilitarizing” the country. He predicted the fighting will “undoubtedly lead to the collapse of the existing regime” in Kyiv.

While focusing on the Donbas, the Russians have hit areas all across the country with missile strikes.

On Sunday in central Ukraine, relatives and friends attended a funeral for Liza Dmytrieva, a 4-year-old girl killed Thursday in a Russian missile strike. The girl with Down syndrome was en route to see a speech therapist with her mother when the missiles struck the city of Vinnytsia. At least 24 people were killed, including Liza and two boys, ages 7 and 8. More than 200 others were wounded, including Liza’s mother, who remains in an intensive care unit.

“I didn’t know Liza, but no person can go through this with calm,” priest Vitalii Holoskevych said, bursting into tears as Liza’s body lay in a coffin with flowers and teddy bears in the 18th-century Transfiguration Cathedral in Vinnytsia.

‘’We know that evil cannot win,’ he added.

In the Kharkiv region, at least three civilians were killed and three more were injured Saturday in a pre-dawn Russian strike on the city of Chuhuiv, just 120 kilometers (75 miles) from the Russian border, police said.

One resident of the apartment building that was hit said she was lucky to have survived.

“I was going to run and hide in the bathroom. I didn’t make it and that’s what saved me,” said Valentina Bushuyeva. Pointing to her destroyed apartment, she said: “There’s the bathroom — explosion. Kitchen — half a room. And I survived because I stayed put.”