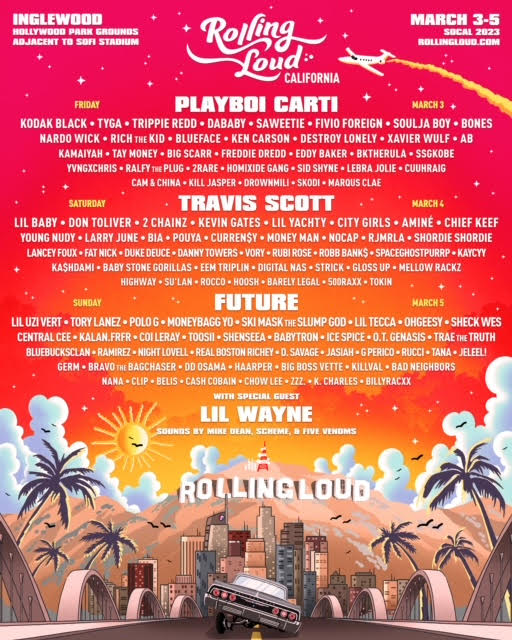 Headliners for Rolling Loud, the “world’s largest hip-hop festival,” have been announced for the much-anticipated 2023 festival in Inglewood this spring.

The three-day event will be taking over Hollywood Park on the grounds next to SoFi Stadium from March 3-5 in 2023.

This marks the first time a music festival will be hosted on the 300-acre mixed-use site. The spring festival will also mark its return to Los Angeles county since 2019.

“Rolling Loud California aims to celebrate the rich history of West Coast hip-hop–paying tribute to its icons and highlighting its current and up-and-coming stars–while rappers from all regions to shut it down at Hollywood Park,” said festival organizers.

Rolling Loud has hosted festivals across the country and internationally and typically sees around 100,000 fans at each event. Future events in 2023 are scheduled for Thailand from April 13-15 and Portugal from July 5-7.

“Rolling Loud California 2023 makes a triumphant return to South Central Los Angeles. One of rap music’s most historic neighborhoods, South Central L.A. helped define the sound of the genre, and developed an untold number of rap icons. Inglewood itself played a major role in hip-hop history, earning shout outs from Dr. Dre on “California Love” and “The Next Episode,” producing West Coast legends like Mack 10 and Shade Sheist, and contemporary stars like Omarion, D Smoke, SiR, and many others.”