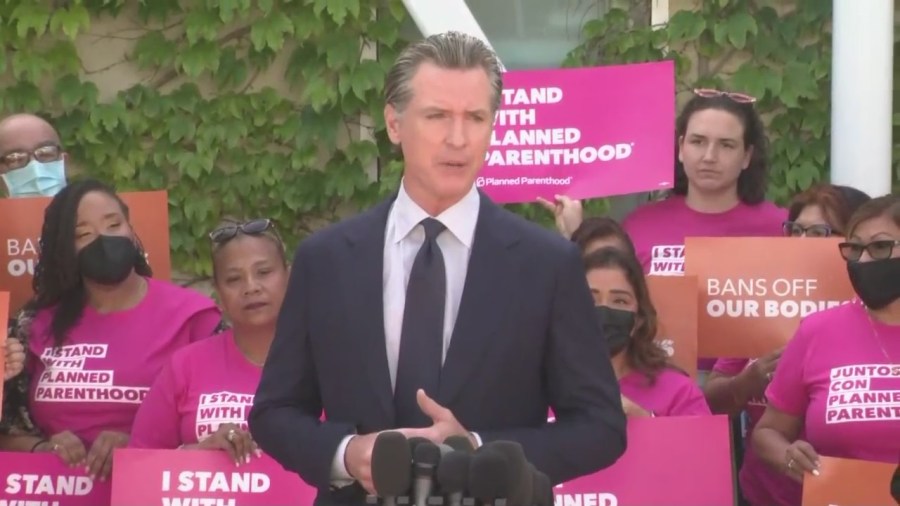 California Democrats have accelerated their plan to make the nation’s most populous state a sanctuary for women seeking abortions, propelled by the release this week of an early draft of a U.S. Supreme Court ruling that has ignited a surge of activism among the state’s vast network of providers and advocacy groups.

The draft — which could change when a final ruling is issued, likely next month — would end nearly 50 years of federal abortion protections. Just hours after a leaked copy was published, Gov. Gavin Newsom and the state’s top legislative leaders said they would seek voter approval to make abortions a constitutional right in California, a move designed to shield the state from future court rulings and a potential federal abortion ban should Republicans win control of Congress.

On Thursday, Democrats in the state Legislature fast-tracked a bill that would block other states’ laws from imposing civil or criminal penalties on people who provide or aid abortions in California, setting up another likely prolonged legal fight over state sovereignty.

The California Legislative Women’s Caucus has asked Newsom for $20 million to help pay for women from other states where abortion would be outlawed to come to California for the procedure — a sum the governor could announce in his revised budget proposal next week.

In just 48 hours after the draft ruling became public, California’s only statewide nonprofit that helps women travel to and within the state to get abortions raised $25,000 — a quarter of its normal annual spending — while fielding a flood of calls from people volunteering to give free rides or a place to stay to women looking to end their pregnancies.

For Madilynne Hoffman, California’s preparations are comforting. The 22-year-old mother of two ended her pregnancy in December at an abortion clinic in the state’s Central Valley.

When she returned to a different clinic later for birth control, she said a protester followed her to her car. That experience, coupled with the draft court ruling, prompted her to look for volunteer opportunities at clinics.

“That’s really saddening to think that women have to fight for their bodies,” she said. “It should just be an automatic right.”

California’s legislative efforts represent the opening salvos in the next phase of the abortion rights battle, which will play out among state governments that are left to make and enforce their own rules if the federal protections are abolished. Already, Republican-led states like Oklahoma and Idaho have passed more restrictive abortion laws in anticipation of the court’s ruling.

The Democrats who control all levers of power in state government have written 13 bills that would authorize more medical providers to perform abortions, create scholarships for reproductive care doctors, block other states from accessing some California medical records, and create a fund for taxpayer money to help pay for women in states where abortion is illegal to come to California to get the procedure. A measure that makes abortions cheaper by banning co-pays and deductibles has already been signed into law.

Meanwhile, abortion providers are busy hiring more doctors and adding space to receive a predicted surge in patients. Planned Parenthood Mar Monte, the nation’s largest Planned Parenthood affiliate, is renovating and building new facilities in Oakland, San Jose, Fresno, Visalia and Reno, Nevada. When they’re finished, it will boost their capacity from 200 to 500 patients per week.

“We’ve been preparing for it for over a year — and honestly since November 2016,” when Republican Donald Trump was elected president, said Andrew Adams, Planned Parenthood Mar Monte’s chief of staff and head of strategic communications.

Anti-abortion advocates are getting ready, too, by bolstering staffing and support at crisis pregnancy centers. These centers, which often locate near abortion clinics and are religiously affiliated, seek to convince women to forego abortion for adoption or other options.

Some of these centers in conservative states receive tens of millions of dollars in public money. California has been hostile to these centers, passing a law requiring them to tell clients about abortion services. The U.S. Supreme Court struck down that law in 2018.

“We believe that is the way people of faith and the pro-life community can really help to put our money where our mouth is,” said Jonathan Keller, president and CEO of the California Family Council, which opposes abortion. “No woman should ever feel like abortion is the best option for them.”

While abortion has been legal in every state, it’s not easily accessible everywhere, especially for people who live in poor or rural areas. Across the country, nearly 100 “abortion funds” exist to help these women pay for things like travel, lodging and child care they need to make their appointments.

Since Monday, a national digital fundraising platform for these groups has raised about $1 million, according to Sierra Harris, deputy director of network strategy for the National Network of Abortion Funds.

California has one statewide abortion fund, known as Access Reproductive Justice. The group helps roughly 500 women each year, about a third whom come from other states, according to Executive Director Jessica Pinckney. Each woman gets an average of $300 to $400 in assistance.

That doesn’t pay for everything. To fill the gaps, the group relies on a set of 50 core volunteers who stand ready to give rides, places to stay and extra cash. Those volunteers include Harris, who lives in Oakland.

Since the pandemic, most of the assistance Harris gives is cash. The mother of two small children, Harris recalled a time when she pitched in to buy another woman a plane ticket so she could travel to get an abortion. The woman was also a mother, and later sent Harris a card calling her an “angel.”

The woman said her help made it possible for her “to parent the child I have,’” Harris said. “I think about that all the time.”