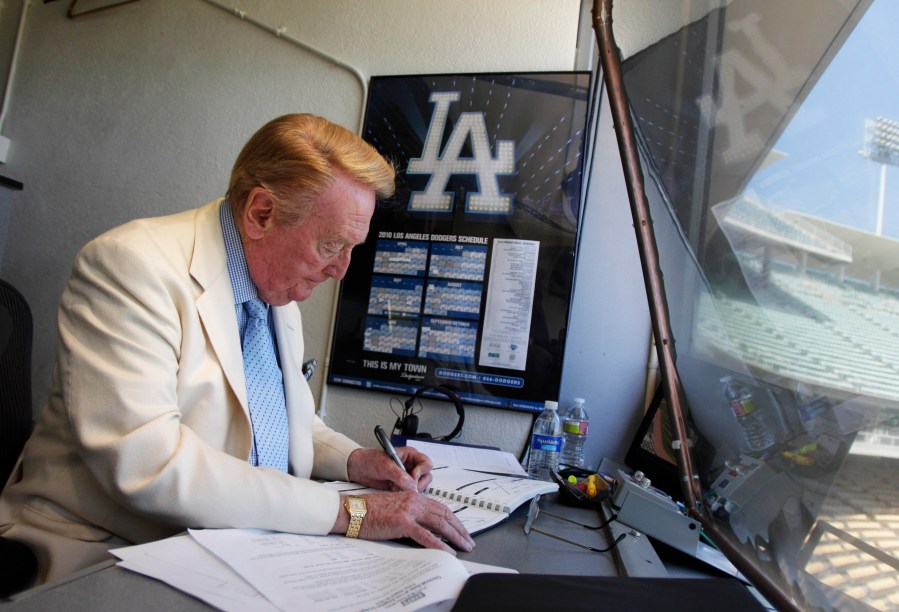 Hall of Fame broadcaster Vin Scully called thousands of games involving the Brooklyn and Los Angeles Dodgers during his 67 years in the booth. He chose his words as artfully as a painter stroking a brush across a canvas. Scully talked about life while chronicling routine plays and historical achievements. Sometimes he was just amusing, too. He died Tuesday night at age 94.

Here are some of his top ones:

It was Game 1, and Scully said on the air that injured Kirk Gibson wasn’t in the dugout and wouldn’t appear in the game. Gibson heard him and grabbed a bat. Soon, he was hobbling around the bases, and Scully took a long pause, letting the jubilant crowd take over.

Sandy Koufax tossed a perfect game at Dodger Stadium on Sept. 9, 1965. Scully paused for 38 seconds to allow listeners to soak in the scene.

Hank Aaron broke Babe Ruth’s all-time home run record on April 8, 1974 in Atlanta against the Dodgers. Scully explained to listeners why it was more than just a historic baseball achievement.

Don Larsen of the New York Yankees pitched a perfect game in the 1956 World Series against the Brooklyn Dodgers at Yankee Stadium, which Scully said was “shivering in its concrete foundation.”

Jim Tracy was livid about a call and he let the umpire know it. Scully showed he could read lips, although he made sure to clean up the language for listeners.