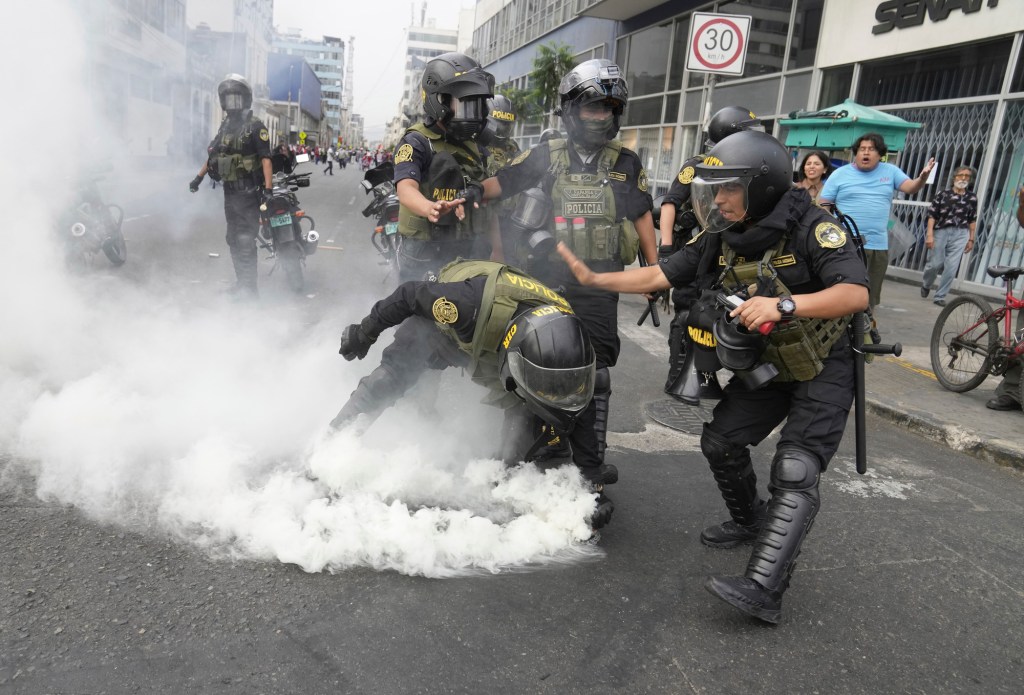 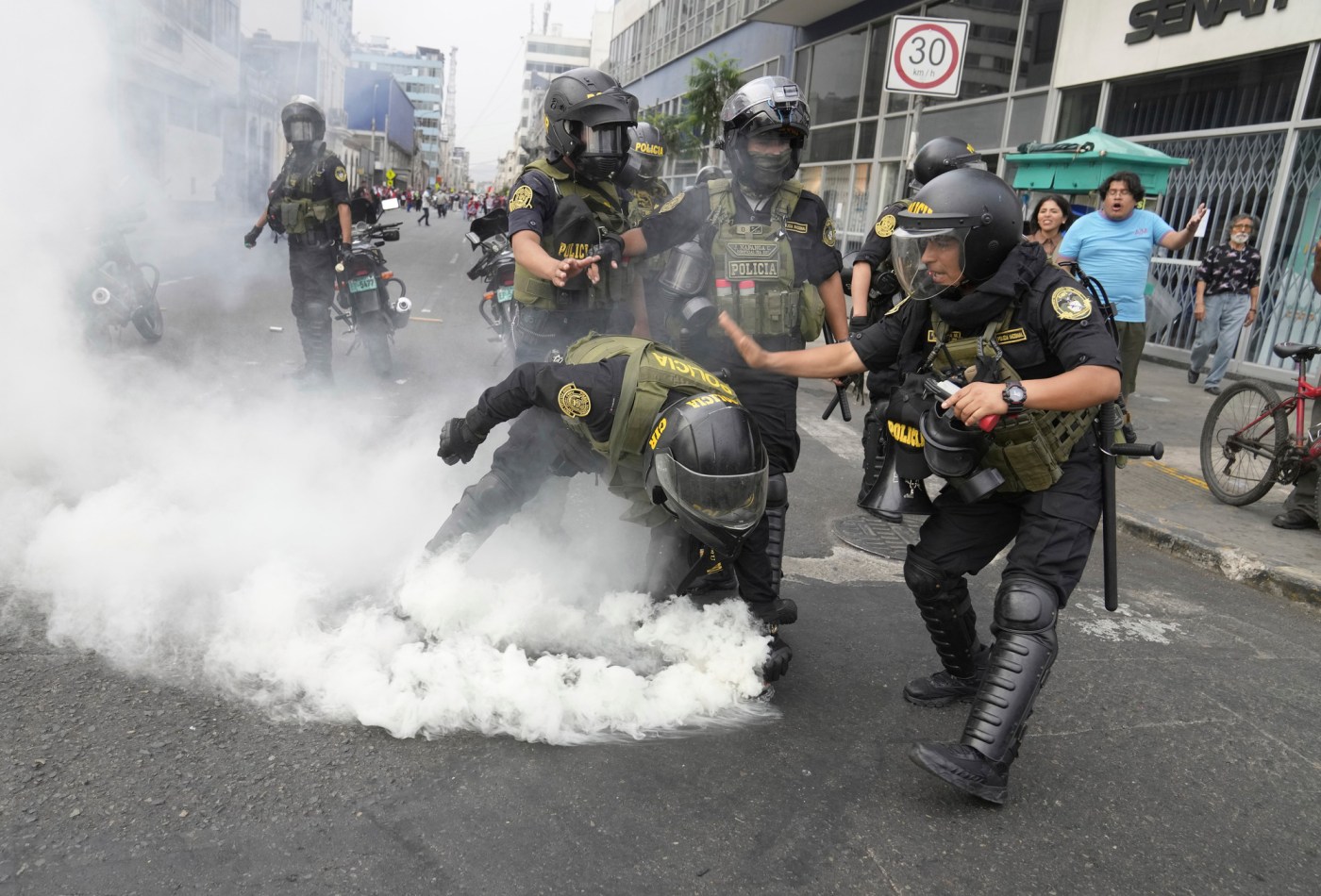 LIMA, Peru — People poured into Peru’s coastal capital, many from remote Andean regions, for a protest Thursday against President Dina Boluarte and in support of her predecessor, whose ouster last month launched deadly unrest and cast the nation into political chaos.

There was a tense calm in the streets of Lima Thursday morning ahead of the protest that supporters of former president Pedro Castillo hope will open a new chapter in the weeks-long movement to demand Boluarte’s resignation, the dissolution of Congress, immediate elections and structural change in the country. Castillo, Peru’s first leader from a rural Andean background, was impeached after a failed attempt to dissolve Congress.

“We have delinquent ministers, presidents that murder and we live like animals in the middle of so much wealth that they steal from us every day,” Samuel Acero, a farmer who heads up the regional committee of protests for the southeastern city Cusco, said as he walked in downtown Lima Thursday morning. “We want Dina Boluarte to leave, she lied to us.”

The protests have so far been held mainly in Peru’s southern Andes, with 53 people dying amid the unrest, the large majority killed in clashes with security forces.

“We’re at a breaking point between dictatorship and democracy,” said Pedro Mamani, a student at the National University of San Marcos. Students there are housing demonstrators who traveled to Peru’s capital for the protest that is being popularly referred to as the “takeover of Lima.”

The university was surrounded by police officers, who also congregated at several key points of Lima’s historic downtown district.

A total of 11,800 police officers will be deployed throughout Lima, Victor Zanabria, the head of the police force there told local media. He played down the size of the protests, saying he expected around 2,000 people to participate.

The demonstrations that erupted last month and subsequent clashes with security forces amount to the worst political violence Peru has experienced in more than two decades and has shined a spotlight on the deep divisions that exist in the country between the urban elite largely concentrated in Lima and the poor rural areas, where citizens have often feel relegated.

“In my own country, the voices of the Andes, the voices of the majority have been silenced,” Florencia Fernández, a lawyer who lives in Cusco, said Wednesday ahead of the protest. “We’ve had to travel to this aggressive city, this centralist city, and we say, the Andes have descended.”

By bringing the protest to Lima, demonstrators hope to give fresh weight to the movement that began when Boluarte, who was the vice president, was sworn into office on Dec. 7 to replace Castillo.

“When there are tragedies, bloodbaths outside the capital it doesn’t have the same political relevance in the public agenda than if it took place in the capital,” said Alonso Cárdenas, a professor of public policies at the Antonio Ruiz de Montoya University in Lima. “The leaders have understood that and say, they can massacre us in Cusco, in Puno, and nothing happens, we need to take the protest to Lima,” Cárdenas added, citing two cities that have seen protest violence.

The concentration of protesters in Lima also reflects how the capital has started to see more antigovernment demonstrations in recent days.

“Lima, which hadn’t joined the protests at all in the first phase in December, decided to join after the Juliaca massacre,” Omar Coronel, a political science professor at the Catholic University of Peru, said, referring to the 18 people killed in that southern city on Jan. 9.

The protesters on Thursday are planning to march from downtown Lima to the Miraflores district, one of the emblematic neighborhoods of the country’s economic elite.

The government has called on protesters to be peaceful.

“We know they want to take over Lima,” Boluarte said this week. “I call on them to take over Lima, yes, but in peace” and added that she would “wait for them in the Government House to be able to talk about their social agendas.”

Boluarte has said she supports a plan to push up to 2024 elections for president and congress originally scheduled for 2026.

Many protesters say that no dialogue is possible with a government that they say has unleashed so much violence against its citizens.

In the town of Macusani Wednesday, protesters set fire to the police station and judicial office after two people were killed and another seriously injured by gunfire amid antigovernment protests.

The officers had to escape the police station that the crowd burned in a helicopter, police said. Macusani, about 160 kilometers from the city of Juliaca near Lake Titicaca, is the capital of the province of Carabaya.

Activists have dubbed Thursday’s demonstration in Lima as the Cuatro Suyos March, a reference to the four cardinal points of the Inca empire. It’s also the same name that was given to another massive mobilization that took place in 2000, when thousands of Peruvians took to the streets against the autocratic government of Alberto Fujimori, who resigned months later.

There are several key differences between those demonstrations and this week’s protests.

“In 2000, the people protested against a regime that was already consolidated in power,” Cardenas said. “In this case, they’re standing up to a government that has only been in power for a month and is incredibly fragile.”

Another distinction is that the 2000 protests had a centralized leadership and were led by political parties. “Now what we have is something much more fragmented,” Coronel said.

The protests that have engulfed much of Peru in the past month have largely been grassroots efforts without a clear leadership.

“We have never seen a mobilization of this magnitude, there’s already a thought installed in the peripheries that it is necessary, urgent to transform everything,” said Gustavo Montoya, a historian at the National University of San Marcos. “I have the feeling that we’re witnessing a historic shift.”

The protests have grown to such a degree that demonstrators are unlikely to be satisfied with Boluarte’s resignation and they are now demanding a more fundamental structural reform.

The protests have emerged “in regions that have been systematically treated as second-class citizens,” Montoya said. “I think this will only keep growing.”

Analysts warn that a failure to listen to demands from protesters could have tragic consequences.

“We have to start to think what we want to do with Peru, otherwise this could all blow up,” Cardenas said.