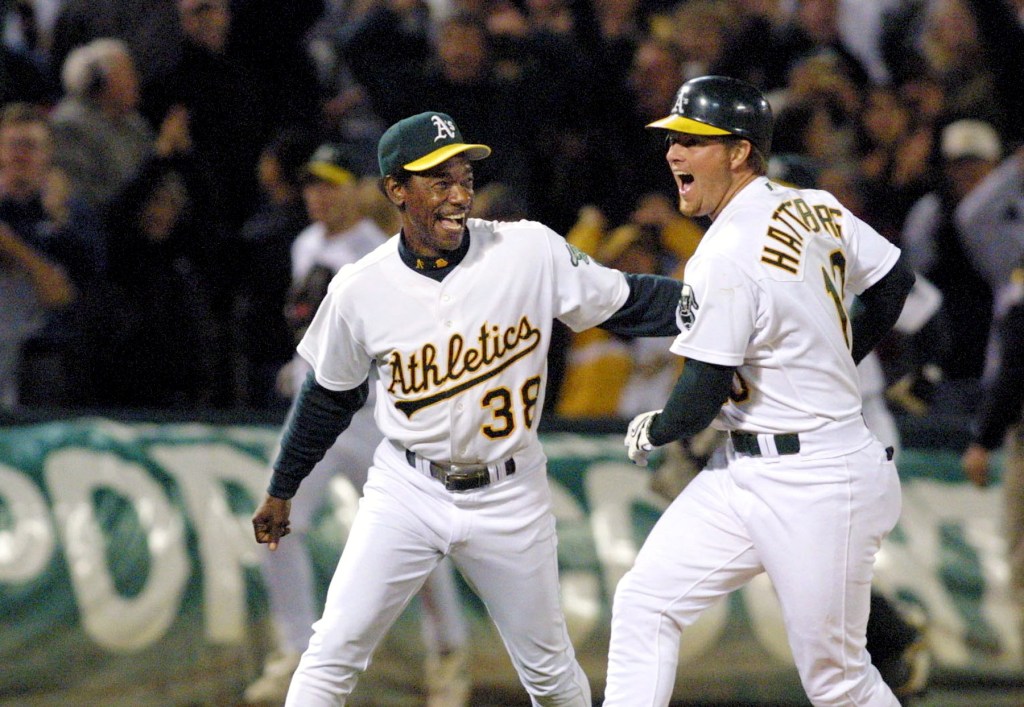 OAKLAND – When A’s shortstop Nick Allen played with one of his travel ball teams as a young kid, he was given the number 10, which he kept for several more years.

Allen remembers that the number 10 was also being worn at that time by Miguel Tejada, who had it when he Baltimore Orioles, the Houston Astros, San Diego Padres and finally the San Francisco Giants in 2011.

“Growing up, he was definitely one of the big shortstops in the game,” said Allen, who turns 24 in October, of Tejada. “It was really cool seeing him play.”

Tejada, a six-time MLB All-Star, is slated to be at the Coliseum on Sunday for the A’s ceremony honoring the 2002 team that won a then-AL record 20 consecutive games.

The event is not only an opportunity for fans to see the team one more time, but is also a chance for current A’s players to familiarize themselves with members of that 103-win squad. Tejada, for instance, was the AL’s Most Valuable Player that year after he hit 34 home runs to go with an OPS of .861.

Here are five facts that might have been forgotten about the 2002 A’s 20-game win streak.

Still, Koch only had one blown save during the streak. That came in the 20th game as he gave up an RBI single to Luis Allcea with two outs in the top of the ninth, as the Royals tied the game 11-11. Of course, Koch ended up with the win after Scott Hatteberg’s solo home run with one out in the bottom of the ninth inning.

2. FOR STARTERS: The A’s received mostly outstanding starting pitching during the streak, as the Big Three of Mark Mulder, Tim Hudson, and Barry Zito combined to earn the wins in 11 of 20 games.

The A’s best starting pitcher during the streak, though, was Cory Lidle. He went 3-0 and allowed just one earned run over 30⅓ innings pitched over four starts, which included a complete game on Aug. 21 in a 6-0 A’s win over Cleveland.

Lidle died Oct. 11, 2006, in a plane crash in New York. His wife, Melanie, and their son Christopher are attending the ceremony on behalf of Cory.

3. LABOR DISPUTE: A work stoppage loomed near the end of August as MLB and the Players Association frantically worked to finalize a new collective bargaining agreement.

Just eight years earlier, the 1994 strike by the players wiped out the remainder of that season, plus the playoffs and the World Series both being canceled. Could it happen again?

Finally, with just hours to spare before a strike deadline set by the union, the MLB and MLBPA came together on a four-year agreement on Aug. 30, and baseball’s schedule continued without a hitch. The key economic issues that had to be resolved at that time were revenue sharing and a luxury tax on payrolls.

The A’s went on to win their 16th straight game on Aug. 30., a 4-2 home victory over the Minnesota Twins and captured four more games in a row to set the AL record. Maybe none of it happens if baseball doesn’t find labor peace at the last hour.

4. NOT PULLING AWAY: The A’s entered their Aug. 13 game with Toronto with a more-than-respectable record of 68-51 but were still in third place in the AL West. The first-place Seattle Mariners were 72-46 and the Anaheim Angels were 70-48.

Even by the end of the 20-game streak, the A’s weren’t in a comfortable position. With their 12-11 win over Kansas City on Sept. 4, the A’s were only 3½ games up on the Angels. Seattle had fallen seven games back by that point.

After some spotty play in the middle of September, the A’s were neck and neck with Anaheim again. Finally, Oakland righted the ship and wound up winning the division by four games over the Angels, who would go on to win the World Series that year.

5. THE VOICE: A’s play-by-play announcer Ken Korach’s calls on Tejada’s walk-off hits in the 18th and 19th games of the winning streak will live on forever. Korach, though, only got that opportunity because Bill King decided to remain on a scheduled vacation he had planned around Labor Day.

As the A’s streak was nearing record proportions, someone mentioned to King that he might want to return from his vacation a bit earlier than expected. King, though, didn’t believe was the right thing to do to Korach, who remained the A’s main radio play-by-play voice for some of the streak’s most memorable moments.