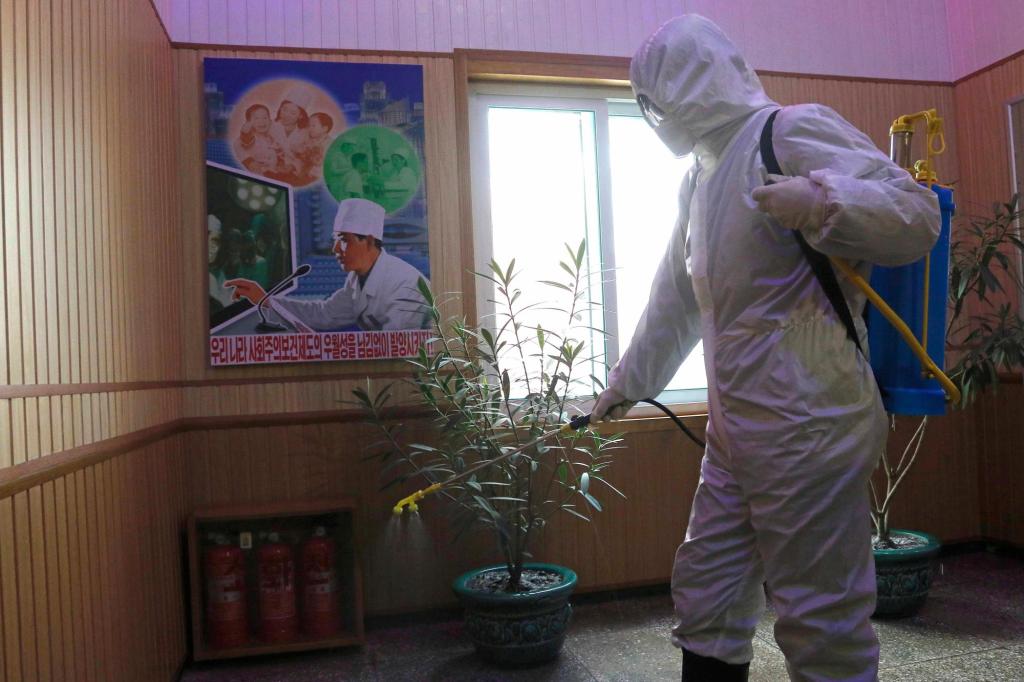 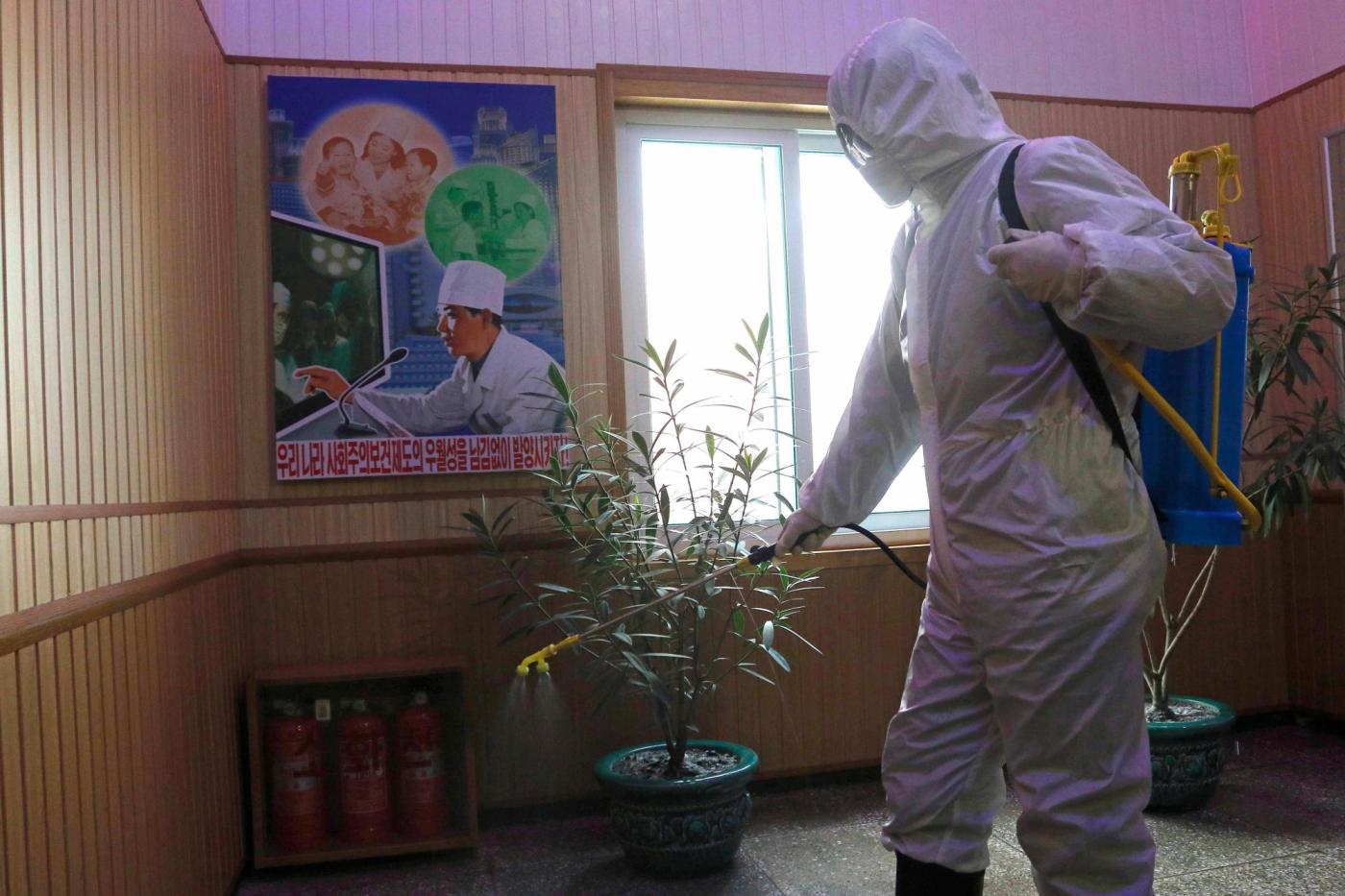 By KIM TONG-HYUNG and HYUNG-JIN KIM

SEOUL, South Korea (AP) — North Korea imposed a nationwide lockdown Thursday to control its first acknowledged COVID-19 outbreak after holding for more than two years to a widely doubted claim of a perfect record keeping out the virus that has spread to nearly every place in the world.

The size of the outbreak wasn’t immediately known, but it could have serious consequences because the country has a poor health care system and its 26 million people are believed to be mostly unvaccinated. Some experts say the North, by its rare admission of an outbreak, may be seeking outside aid.

The official Korean Central News Agency said tests of samples collected Sunday from an unspecified number of people with fevers in the capital, Pyongyang, confirmed they were infected with the omicron variant.

In response, leader Kim Jong Un during a ruling party Politburo meeting called for a thorough lockdown of cities and counties and said workplaces should be isolated by units to block the virus from spreading, KCNA said. He urged health workers to step up disinfection efforts at workplaces and homes and mobilize reserve medical supplies.

Kim said it was crucial to stabilize transmissions and eliminate the infection source as fast as possible, while also easing the inconveniences to the public caused by the virus controls. Kim insisted that the country will surely overcome what he described as an unexpected outbreak because its government and people are “united as one.”

North Korea, which continues to employ one of the world’s most restrictive border controls, didn’t provide further details about its lockdown. But an Associated Press photographer on the South Korean side of the border saw dozens of people working in farming fields or walking on footpaths at a North Korean border town — an indication the lockdown doesn’t require people to stay home or it exempts farm work.

The measures described in state media and Kim’s declaration that economic goals should be met possibly indicate that North Korea isn’t strictly confining people to their homes and is focusing more on restricting travel and supplies between regions to slow the viral spread, analyst Cheong Seong-Chang at South Korea’s Sejong Institute said.

The North’s government has shunned vaccines offered by the U.N.-backed COVAX distribution program, possibly because those have international monitoring requirements.

South Korea’s Unification Ministry, which handles inter-Korean affairs, said the South is willing to provide medical assistance and other help to the North based on humanitarian considerations. Relations between the Koreas have deteriorated since 2019 amid a stalemate in nuclear negotiations and the North’s increasingly provocative weapons demonstrations.

Kim Sin-gon, a professor at Seoul’s Korea University College of Medicine, said North Korea likely is signaling its willingness to receive outside vaccines shipments, but wants many more doses than offered by COVAX to inoculate its entire population multiple times. He said North Korea would also want COVID-19 medicines as well as medical equipment shipments that are banned by U.N. sanctions.

The omicron variant spreads much more easily than earlier variants of the virus, and its fatality and hospitalization rates are high among unvaccinated older people or those with existing health problems. That means the outbreak could cause “a serious situation” because North Korea lacks medical equipment and medicine to treat virus patients and many of its people are not well-nourished, Kim Sin-gon said.

Ahn Kyung-su, head of DPRKHEALTH.ORG, a website focusing on health issues in North Korea, said North Korea may want an international shipment of COVID-19 treatment pills. But he said the North’s admission of the outbreak is also likely designed to press its people harder to guard against the virus as China, which shares a long, porous border with the North, has placed many cities under lockdown over virus concerns.

Despite the elevated virus response, Kim Jong Un ordered officials to push ahead with scheduled construction, agricultural development and other state projects while bolstering the country’s defense postures to avoid any security vacuum.

The North will likely double down on lockdowns, even though the failure of China’s “zero-COVID” approach suggests that approach doesn’t work against the fast-moving omicron variant, said Leif-Eric Easley, a professor of international studies at Seoul’s Ewha Womans University.

“For Pyongyang to publicly admit omicron cases, the public health situation must be serious,” Easley said. “This does not mean North Korea is suddenly going to be open to humanitarian assistance and take a more conciliatory line toward Washington and Seoul. But the Kim regime’s domestic audience may be less interested in nuclear or missile tests when the urgent threat involves coronavirus rather than a foreign military.”

North Korea’s previous coronavirus-free claim had been disputed by many foreign experts. But South Korean officials have said North Korea had likely avoided a huge outbreak, in part because it instituted strict virus controls almost from the start of the pandemic.

Early in 2020 — before the coronavirus spread around the world — North Korea took severe steps to keep out the virus and described them as a matter of “national existence.” It quarantined people with symptoms resembling COVID-19, all but halted cross-border traffic and trade for two years, and is even believed to have ordered troops to shoot on sight any trespassers who crossed its borders.

The extreme border closures further shocked an economy already damaged by decades of mismanagement and U.S.-led sanctions over its nuclear weapons and missile program, pushing Kim to perhaps the toughest moment of his rule since he took power in 2011.

North Korea had been one of the last places in the world without an acknowledged COVID-19 case after the virus first detected in the central Chinese city of Wuhan in late 2019 spread to every continent including Antarctica. Turkmenistan, a similarly secretive and authoritarian nation in Central Asia, has reported no cases to the World Health Organization, though its claim also is widely doubted by outside experts.

In recent months, some Pacific island nations that kept the virus out by their geographic isolation have recorded outbreaks. Only tiny Tuvalu, with a population around 12,000, has escaped the virus so far, while a few other nations – Nauru, Micronesia and Marshall Islands – have stopped cases at their borders and avoided community outbreaks.

North Korea’s outbreak comes as China — its close ally and trading partner — battles its biggest outbreak of the pandemic.

In January, North Korea tentatively reopened railroad freight traffic between its border town of Sinuiju and China’s Dandong for the first time in two years, but China halted the trade last month due to an outbreak in Liaoning province, which borders North Korea.