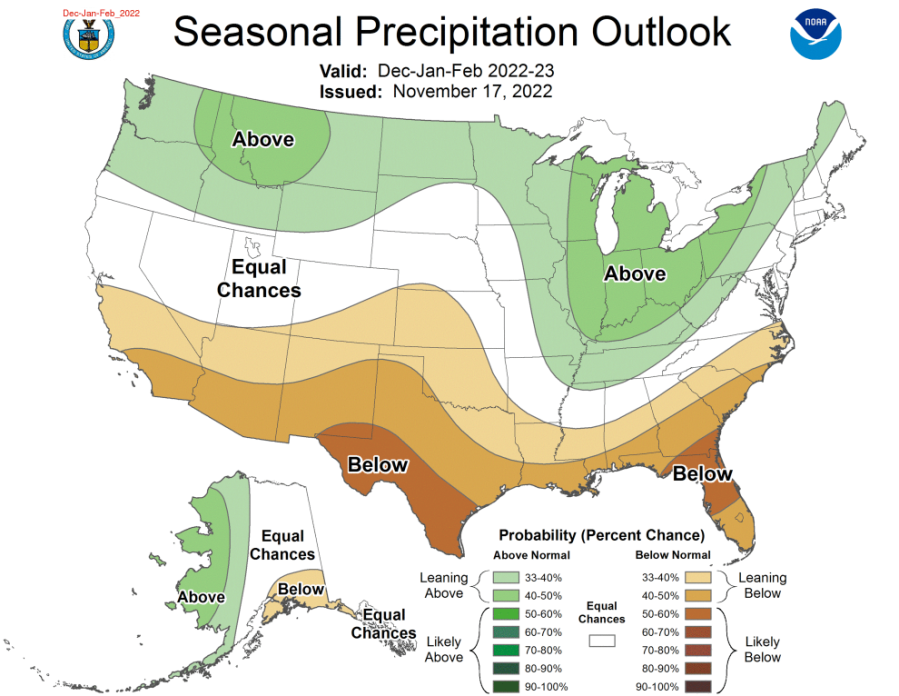 Most Californians don’t expect to see anything like a white Christmas, but this year, even a damp Christmas is looking unlikely. An update to the Climate Prediction Center’s official winter forecast shows a hot and dry season ahead for much of the Golden State.

The 90-day outlook was published Thursday morning by the Climate Prediction Center, part of the National Oceanic and Atmospheric Administration’s (NOAA) National Weather Service. It gives people a rough idea of what December, January and February will look like across the country.

The outlook shows the effects of La Niña still clearly visible. A La Niña climate pattern tends to divide the country in half, bringing a dry winter to the southern half and a wetter winter to the northern half.


Why a triple-dip La Niña could be bad news

You can see that pattern in the forecast map released Thursday (below): While the Pacific Northwest, Midwest and Northeast are forecast to see above-average precipitation, the southern half of the country is looking dry.

California is split into two, with the southern half forecast to be drier than usual. The northern half of the state is shown in white, meaning it has equal chances of a dry or wet winter.

Southern California, from Santa Barbara down south, has the highest chance of a dry winter.

NOAA’s temperature outlook doesn’t look any bit more wintery for California. The majority of the state is highlighted in orange, indicating a likelihood for warmer-than-average weather from December through February.

According to the U.S. Drought Monitor, 99.5% of California is in a drought. A warm and dry winter, as NOAA is predicting, would only aggravate those conditions.

California is especially reliant on winter rain to make a dent in the drought.

“Here in the Washington, D.C., area, it generally rains all year round,” Mike Halpert, deputy director of the Climate Prediction Center, explained. “So if we have a couple of dry months, it’s OK because we can make it up another time. When you’re in California and the Southwest, 90% of the rain falls in that fairly short winter and spring season. So if you miss that, you’re not going to make that up when you get into the summertime.”

La Niña is favored to stick around all winter, with NOAA forecasters giving it a 76% chance of lasting through February. What happens in spring is less clear; meteorologists say there’s about a 50-50 chance we shift into an ENSO-neutral pattern, which means we’re neither seeing La Niña nor El Niño.