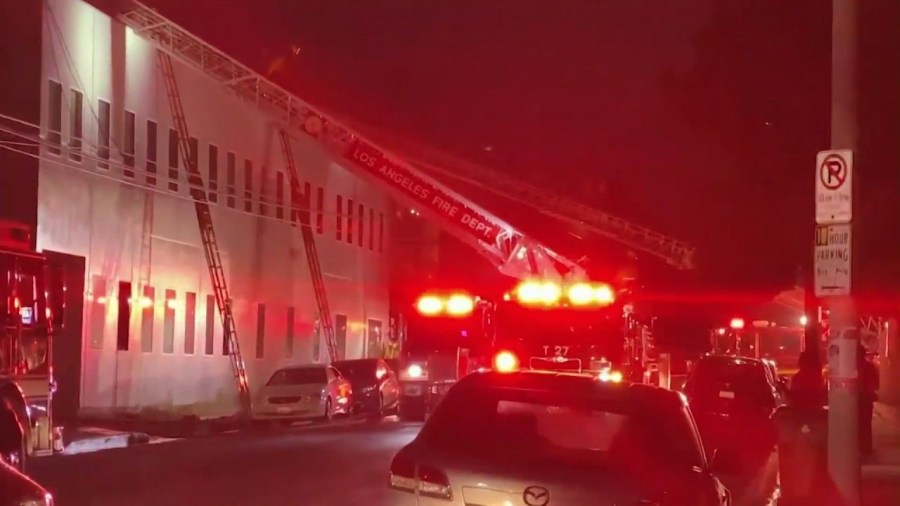 A recording space that was once a vibrant studio and home to music creatives on Lexington Avenue in Hollywood is now boarded up. Out front, candles have been left behind for and a vigil was held for the artist and engineer who lost his life in Thursday’s deadly fire.

Recording artist Jada James joined friends for a candlelight vigil to remember the man they say had a bright future in the industry.

“He knew his sound. He knew how to make it sound right,” James said.

Jamal Rajad Davis lived and worked in the studio space making music. Davis was one of the artists who grabbed whatever they could and ran to escape the flames.

“I’m sorry to Avery’s family and everybody. If I was able to knock on his door, help, I would have,” Davis told KTLA Friday. “By the time I dropped the stuff and ran back to the door and got halfway in there, it was already smoke inhalation. I was already choking.”

Davis said he tried to do his part to help others, including the eldest daughter of Sharon and Ozzie Osbourne, Aimee Osbourne, who was unaware what was happening from the second floor.

At one point, Davis said, Osbourne considered jumping from the second story to the people below. Ultimately, Aimee, along with her producer, were able to navigate safely out of the building. Once downstairs, Osbourne and Davis embraced.

Sharon Osbourne took to Instagram Thursday night to offer her condolences to Edwards and his family. She also questioned the safety of the building and whether or not the space was up to fire code.

It took fire crews almost an hour to get the fire out, the biggest obstacle for first responders was the building itself.

“This is one of the most compartmentalized buildings I’ve walked through in a very long time,” a Los Angeles Fire Department Public Information Officer said Thursday night from the scene of the fire. “You have an abundance of separate individual sound recording studios. When you have so much insulation and drywall to soundproof it, that holds in the heat.”

Code enforcement authorities from the city are investigating whether the building was approved to be used as recording studios, according to the Los Angeles Times. It was previously listed as both a warehouse and a hostel, the Times reported.

Investigators have yet to determine how the fire started.

Jada James said she and Edwards made a lot of music together and she plans on sharing Avery Drift’s talent with the world.