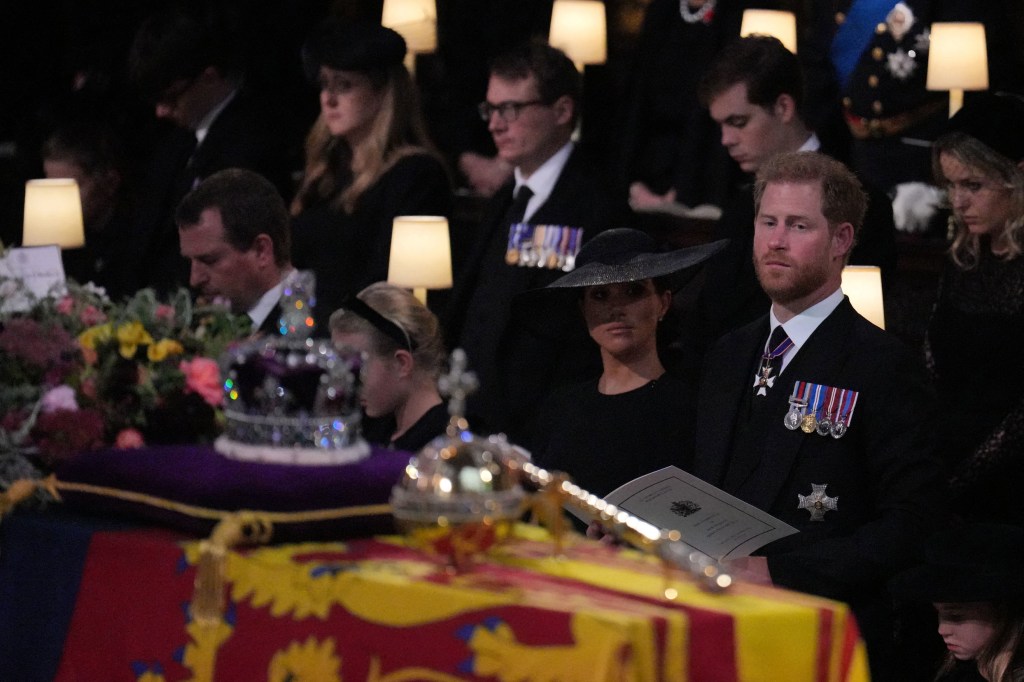 Meghan Markle had some emotional moments after the state funeral for Queen Elizabeth II, capping a long 10 days in which she and her husband, Prince Harry, were heavily scrutinized by the world media and subject to what their supporters believe were deliberate and unnecessary snubs by a royal family eager to put the California exiles in their place.

The Duchess of Sussex looked particularly bereft after she and Prince Harry attended the queen’s committal service at St. George’s Chapel in Windsor Castle.

Like millions around the world, Meghan and Harry watched as the Imperial State Crown, orb and scepter — her “instruments of state” — were removed from the top of her coffin, was then slowly lowered into the family vault at St. George’s Chapel.

The service was the last time the queen’s coffin will be seen in public. It’s possible that  Meghan and Harry would see the coffin one last time during a private family service Monday evening, when the queen is to be buried beside Prince Philip, her husband of 73 years who died in April 2021. The Sun also reported that Meghan and Harry would fly back to the United States as soon as possible to be with their two young children, Archie, 3, and Lilibet, 1, after being away from them for two weeks.

As she exited St. George’s Chapel after the committal service, the penultimate ritual of 10 days of somber pageantry, Meghan looked as if she was trying not to cry.

Gone was the usual smile and confidence that the American former TV actress usually manages to radiate at public events, even under difficult circumstances. Instead, as Meghan and Harry waited for their car, she appeared uncertain. She also looked as if she was trying not to let her chin shake, and she mostly kept her eyes, heavily rimmed with dark makeup, downcast under her wide-brimmed black hat.

The Daily Mail reported that Harry was seen puffing his cheeks as if exhaling with heavy relief after they got into the car.

Back to Windsor Castle after longest of days as royals prepare for final goodbye: Prince Harry puffs out his cheeks as he gets into car with Meghan

Earlier, Meghan was photographed wiping away a tear following the queen’s state funeral service at London’s Westminster Abbey. That emotional ceremony occurred before the late monarch’s coffin was taken to Wellington Arch in Hyde Park before being transported to St. George’s Chapel at Windsor.

📸: Meghan, Duchess of Sussex, sheds a tear as Prince Harry, Duke of Sussex, Queen Consort Camilla and King Charles III are united in grief at the state funeral of Queen Elizabeth II. pic.twitter.com/Vd54sG9kRp

It’s hard to know if Meghan was overcome with grief for the queen Monday, or if she also was feeling the full weight of the past 10 days. The death of the globally popular queen is certain to have implications for Meghan and Harry’s relationship with the royal family and for their situation when they return home to Montecito.

Unfortunately, friends and royal observers don’t believe that relations between the Sussexes and the royal family have improved much over the past 10 days, despite the two parties calling a truce in hostilities, and after King Charles III, Prince William and Sophie, the Countess of Wessex, made public gestures to welcome them to certain events.

A friend of both William and Harry told the Times UK that the brothers’ joint appearances “took effort.” The friend added, “There was an understanding that ‘we need to show solidarity,’ not just ‘we need to do this because it’s our duty.’ But I don’t think it goes much beyond that. There have been some awkward moments this week. I definitely don’t get the sense of any deeper meaningful rapprochement or a sense that this is it: Things will be mended.”

When the queen died on Sept. 8, Meghan and Harry happened to be in the U.K. for events related to some of their longstanding charities, but they reportedly had no plans to visit the queen at her Balmoral estate in Scotland during this trip across the Atlantic.

The Sussexes acrimoniously stepped away from royal duties and moved to California in 2020. Relations between the couple and Charles and William became especially fraught after Meghan and Harry gave a series of interviews alleging that the royal family harbored a racist member and was trying to deny their children royal titles. They also said that Charles cut them off financially and that the institution was cruel, repressive and dysfunctional.

Some of Meghan’s more recent statements in her interview with The Cut magazine and on her “Archetypes” podcast for Spotify reignited controversy. Just a couple weeks before the queen’s death, she told The Cut that she and Harry “upset the hierarchy”  “just by existing” and made veiled threats to dish more dirt on royal life.

Her criticisms added to some people’s view that she and Harry can only make money with their lucrative Spotify and Netflix media ventures by positioning themselves in opposition to the royal family.

The Telegraph and other media outlets reported that the seemingly non-existent relationship between the Sussexes and the royal family was one reason that the couple found themselves outside of the main line of family communications having to do with the queen’s death and her funeral.

For example, The Telegraph reported that Harry received word from Charles on the morning of Sept. 8 that the health of his 96-year-old grandmother had taken a turn for the worse and that she was dying, but The Telegraph said Charles called Harry sometime after he called William, which was one reason Harry’s aides struggled to get him on a flight to Scotland. There also was miscommunication and a possible delay over whether Meghan would accompany Harry to Balmoral Castle or was even welcome, reports said.

Meanwhile, William had met up with Prince Andrew and Prince Edward several hours earlier to catch an RAF flight to Aberdeen. Harry also was on his way to Scotland when his father called to say the queen had died — just five minutes before Buckingham Palace publicly announced her death, The Telegraph said.

Over the next 10 days, Meghan and Harry were the subject of almost nonstop stories that often took attention from the queen and her legacy. Notably, there was a controversy over Harry, an Afghan war veteran, not being permitted to wear his military funeral to the queen’s funeral because he was not a working member of the family. This controversy ended when Buckingham Palace, reportedly at the direction of Charles, reversed this edict and allowed him to wear his army dress uniform at a vigil Saturday night at Westminster Hall.

To the Sussexes’ supporters, a deeply wounding and unnecessary slight occurred when the palace asked Meghan and Harry not to attend a grand reception for world leaders Sunday night, even though they had received an invitation, the Telegraph reported. The couple were told that they had been invited by mistake and that only working royals were allowed to attend.

In denying Meghan and Harry the opportunity to rub shoulders with the likes of U.S. President Joe Biden and other world leaders, the palace powers-that-be “reasonably decided that there is a time and a place” for the Sussexes “and it is not at the biggest diplomatic reception ever hosted by a monarch,” The Telegraph’s associate editor, Camilla Tominey, wrote in a story about how the couple had “been left out in the cold.”

Tominney added that the snub would be a particular blow to Meghan whose post-royal brand has involved repositioning “herself as a global powerhouse, on a par with Michelle Obama, the former first lady.”

In the runup to the funeral, Sussexes did not publicly complain about such slights and adopted a placatory position, “clearly sensing the public mood both in the UK and the US, where Queen Elizabeth was revered,” The Telegraph reported.

They’ve also made moves, “out of respect” for the queen, to put off several of their high-profile projects and public appearances. Meghan delayed the release of her next “Archetypes” episode for several weeks and pulled out of appearing on Jimmy Fallon’s late-night show, at the UN General Assembly and at a Variety magazine gala in Los Angeles, at which she was to be honored with a cover story for the magazine’s Power of Women issue.

More notably, Harry has reportedly delayed the publication of his memoir, which was due out over the holidays. Some publishing sources told Page Six that Harry wanted to delay the book’s release so that he could add chapters about his grandmother’s death or perhaps rethink including criticisms of certain family members.

Despite the Sussexes’ outward attitude of appeasement, their hurt, disappointment, anger and resentment about certain royal moves have been made clear through leaks to the media.

For example, a friend of the Sussexes told the Times UK that it was “beyond bonkers” that Meghan and Harry were not allowed to attend the reception. The source also said that original edict against Harry wearing a military uniform at the vigil made him feel as if “the majority of the operation is against you. It’s hard — nobody likes to feel like they’re being excluded.”

Another friend told The Telegraph’s Tominey that the couple were put out by trying to do everything expected of them during the period of mourning in order to keep the focus on  the queen.

“They have done everything as best they could,” the source told Tominey. “They have turned up, they have smiled, shaken hands, whatever was asked.” Tominey said that the harsh reality of royal life is if you’re not fully a member of the House of Windsor team, “you’re not coming in.”