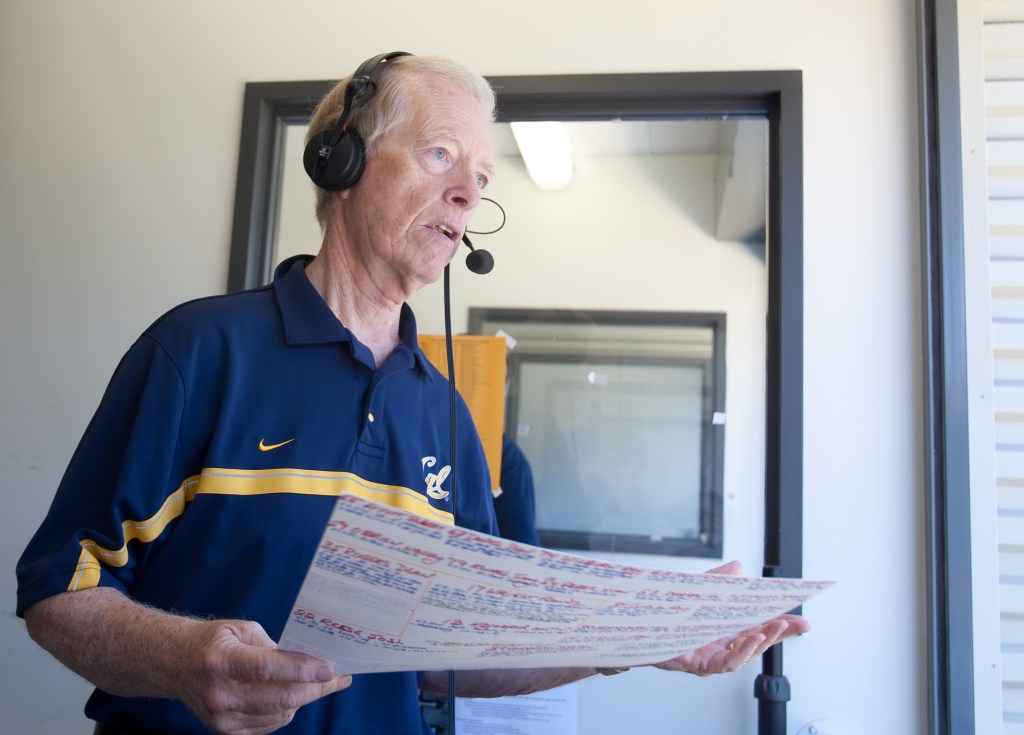 BERKELEY — Joe Starkey’s radio call of The Play — the last-second, five-lateral kickoff return Cal used to win the 1982 Big Game — has become iconic, notable for his incredulous screech, “The band is out on the field!”

But Starkey, who will retire as Cal’s play-by-play man when his 48th season ends the day after Thanksgiving, agonized for years over his performance during one of college football’s most famous plays.

With the 40th anniversary of The Play approaching — it’s Sunday, the day after Cal plays Stanford in the 125th Big Game — Starkey was asked to recall how he felt when all hell broke loose on the afternoon of Nov. 20, 1982.

“Mostly terrified,” said Starkey, 80, who grew up a fan of play-by-play broadcasters. “I always had a sense of when a broadcaster had a really big moment, how important it was that he got it right. So I was terrified that I got it wrong.”

And, in fact, the only Cal player Starkey identified by name during his 40-second call of The Play was Richard Rodgers, who handled the ball twice during the return that gave the Bears a 25-20 victory.

He never mentioned Kevin Moen, who took the final lateral and dashed through the Stanford band into the end zone, plowing over trombone player Gary Tyrrell.

Starkey did not have the benefit of video replays; the game was not televised. There was no satellite coverage, no internet. No help.

“It wasn’t until quite a while later when I began to watch it over and over and over again, I finally got comfortable with it when I realized, you know, there’s no reason to feel guilty — I couldn’t see ‘em,” he said. “There were just too many people on the field. Too many band members. So the fact that I didn’t call the names doesn’t bother me anymore.”

If anything, Starkey’s frantic attempt at describing the scene fits perfectly with The Play itself.

Former Cal quarterback Mike Pawlawski, who has worked alongside Starkey in the radio booth for 27 seasons, was in the eighth grade when Moen-to-Rodgers-to-Garner-to-Rodgers-to-Ford-to-Moen became part of college football lore.

“The call of The Play is awesome,” Pawlawski said. “With Joe’s professionalism on top of it all, he’s trying to hold it together but you can also hear the passion in his voice.”

Moen and Starkey, who have done dozens of appearances, will be together again Friday afternoon when Cal unveils a statue of Moen in front of Memorial Stadium to commemorate The Play. Moen said Starkey’s failure to name names during the play call sometimes comes up in conversation.

“He’s always mentioned that was kind of his faux pas during his call,” Moen said. “To me, that all adds to the magic of the moment. You know, it was chaos. No one knew what was going on. That just makes the call that much better.”

It was, as Starkey often says during a highlight moment of a broadcast, a “bonanza” when he realized years later that Kevin Moen is the son of Don Moen, for whom Starkey worked in the early 1970s during his days as a recruiter for Union Bank in Los Angeles.

Starkey moved into broadcasting a couple years later, calling Oakland Seals hockey games for three seasons while also doing work for the San Jose Sharks and Colorado Rockies of the NHL, the Golden State Warriors and the USFL’s Oakland Invaders. He made the ABC radio call of the U.S. hockey team’s “Miracle on Ice” upset of the USSR at the 1980 Lake Placid Olympics. For 25 years, he served as sports director for KGO.

Starkey was part of the 49ers’ radio broadcast team for 22 years, the last 20 as play-by-play man, calling more than 350 regular season and playoff games, including three Super Bowls. He was there for Joe Montana, Jerry Rice, Ronnie Lott and Steve Young.

By the time he signs off after the Cal-UCLA game on Nov. 25, Starkey will have worked 550 Bears games.

From Joe Roth to Chuck Muncie to Aaron Rodgers to Jared Goff, Starkey has narrated a half-century of Cal football stories. He says offensive lineman Ted Albrecht and coach Mike White were incredibly helpful to him that first year, inviting him into the film room and fueling his understanding of the game.

Now the radio booth at Memorial Stadium is named in Starkey’s honor and throughout the Cal football offices, there are visual reminders of The Play and Starkey’s call.

“You walk down the halls or go into our team room and you see the quotes,” Cal coach Justin Wilcox said. “It’ll stand forever. When they do the greatest moments of sports and college football, that’s going to be a part it for the remainder of time.

“It’s pretty neat to know the guy who made the call.”

Starkey expects Saturday’s game on the 40th anniversary of The Play could feel like the end of something, even with one date left on his schedule.

“Oh, it’s going to be awful. I’m an Irishman and I cry,” Starkey said. “I don’t think there’s any doubt it will be hugely emotional for me.”

“He is the voice of Cal football in my head,” said Pawlawski, who played for the Bears 30 years ago. “He was on the recruiting tape they sent me as a high school quarterback. For me, he’s going to be that voice forever.”

As he will be for generations of Cal football fans.