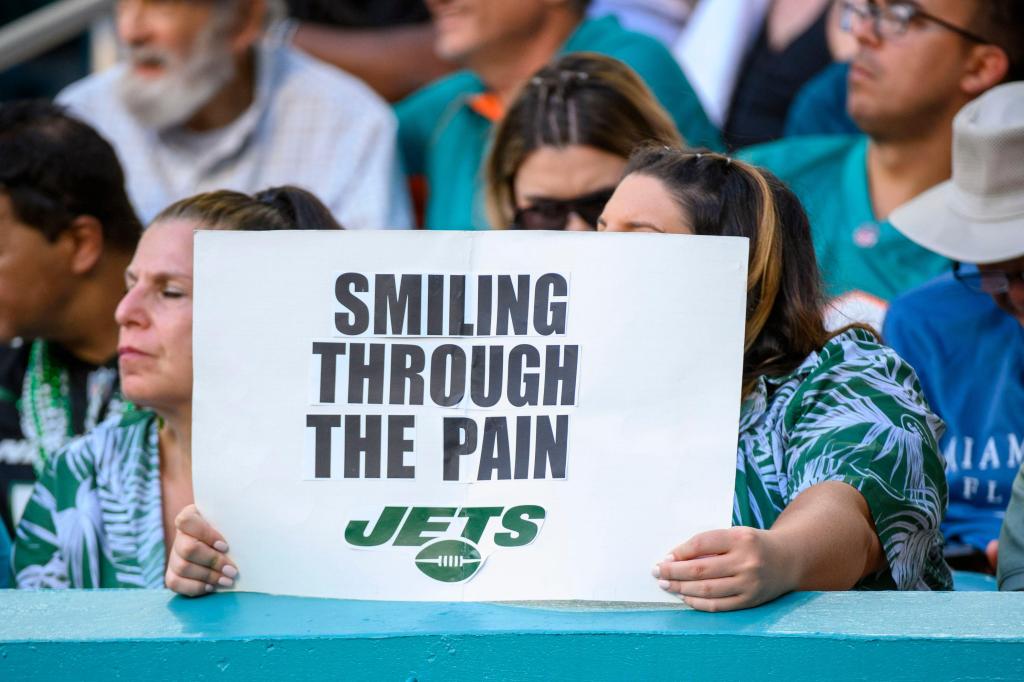 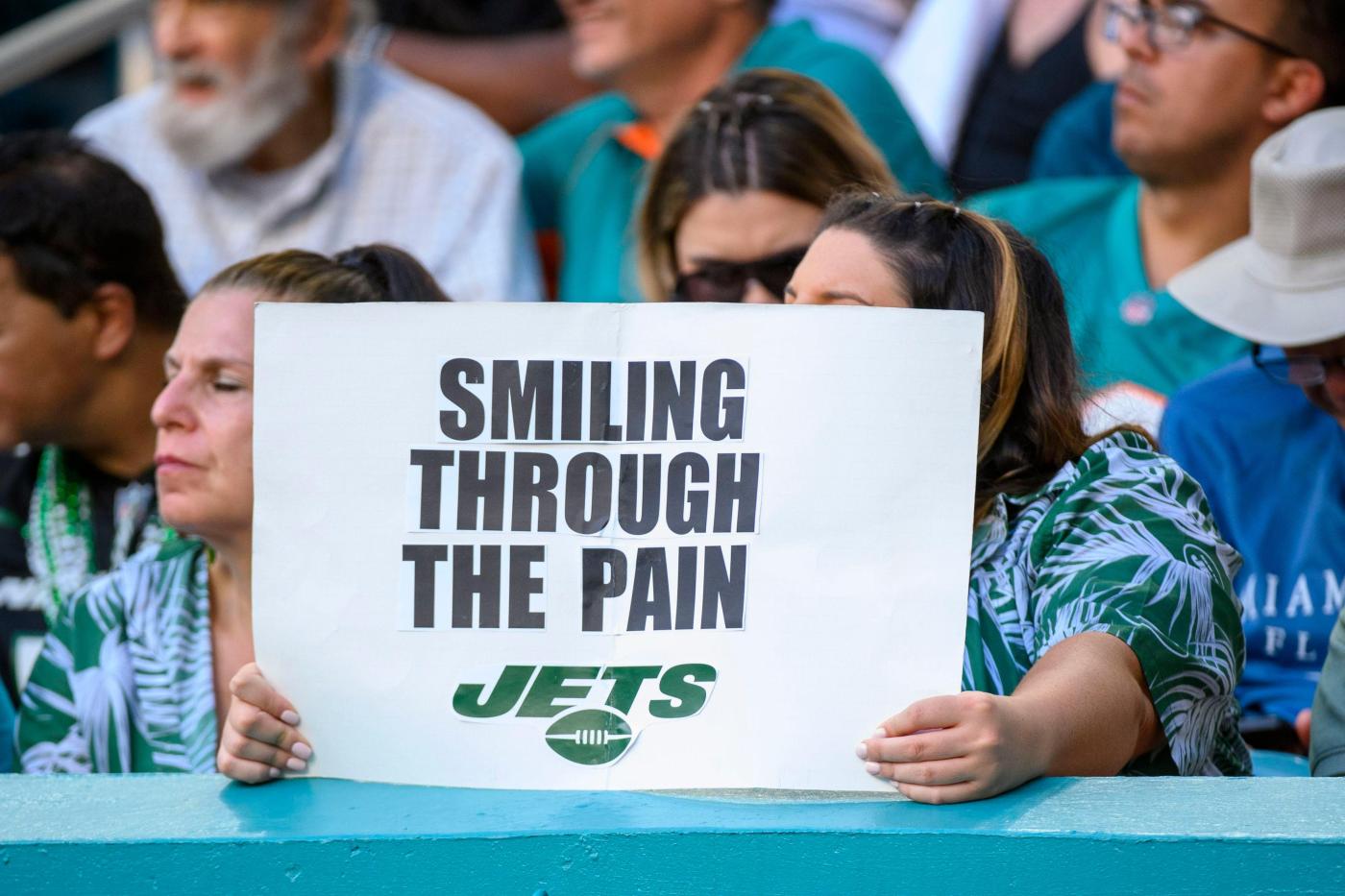 There really is no better weekend in the pro football season than this one, two games on Saturday, including the one between the Giants and the Eagles, and two more on Sunday, including the one between the Cowboys and the 49ers, one of the storied rivalries in the history of the sport. I saw a lot of those games in person, including the one at old Candlestick Park when I was about twenty yards away from the late Dwight Clark when he reached for the sky and brought down the pass from Joe Montana that sent the 49ers to their first Super Bowl under Bill Walsh.

But there is no season for Jets fans at this time of year.

There hasn’t been any playoff season for Jets fans in 12 long years, practically 12 years to the day from when Rex Ryan’s guys nearly chased the Steelers into the parking lot at Heinz Field before finally losing that AFC championship game, 24-19.

There was always the theory in sports writing that so often the best story was in the losers’ locker room or clubhouse. This goes all the way back to when the great Murray Kempton wrote one of the most beautiful features of all time on the day of Don Larsen’s perfect game, when Murray went to the Dodgers clubhouse and wrote about old Sal Maglie, who had lost that game, 2-0.

This is how that piece ended in the old New York Post:

“On the other side of the room, somebody asked [Roy] Campanella if Maglie had made any mistakes out there. ‘Sal, make mistakes?’ said Campanella. ‘The only mistake he made today was pitching.’ He pulled on jacket and turned to what was last of the assemblage. Maglie was going now, as losers are required to go, to get his picture taken with Don Larsen in the Yankee dressing room.

“‘I told you,” chided Roy Campanella, as Sal Maglie went out the door, “‘that there would be days like this.’”

There are only days like this for fans of the New York Jets at this time of year.

It is as if they are standing outside the stadiums where the games are being played and can only hear cheers for somebody else’s teams. For now, and for all the bright promise shown over the first 11 weeks, especially by the defense, they remain the biggest losers we have in sports around here, their fans having the same kind of conversation or listening to the same conversation that always seems to go on around them, about who is going to be their quarterback next season.

You know the only quarterback who has given them a chance to make the postseason since Heinz Field? Ryan Fitzpatrick. He was 33 in 2015, playing for his sixth NFL team (there would be three more for him after that), and the Jets were 10-5 going into Buffalo on the last Sunday of the regular season. If they won they were back in the playoffs. They lost to the Bills that day. Because this is the Jets, of course the Bills were being coached by Rex, who really did coach that game as if it was the Super Bowl he never made when he had the Jets.

It looked as if they were going to make it back to the playoffs this time. There would be the point when Zach Wilson, on whom the Jets appear to have swung and missed at No. 2 in the draft the way they swung and missed with Sam Darnold at No. 3 (it’s kind of a world record in a four-year span), had a record of 5-2 as a starter. The two losses were against Bill Belichick, who has made a coaching career stealing lunch money from young quarterbacks like the kid from Brigham Young.

At the bitter end for the Jets, just because they’re the Jets, they went with Joe Flacco in the last game of their regular season rather than Wilson. It was a way of raising a white flag, and not in honor of Mike White, by the way.

Now, once again, they are on the outside looking in. The following thoughts come from a friend of mine who is the best and most sensible Jets fan I know, and the one who told me from the start, when we first started hearing that GM Joe Douglas had fallen in love with Zach Wilson, that drafting him was a mistake:

“You watch games this weekend as a Jets fan and feel as if your team isn’t even in the league anymore, like they’re playing in somebody else’s NFL, just not this one. We talk frequently about the Jets owning the longest playoff drought in the NFL — now 12 seasons — but that’s not the only blight on the franchise. Since the Jets fell five points shy of a trip to the Super Bowl that January 2011 night at Heinz Field, they are one of only just six NFL franchises NOT to make the Divisional Round. The other five — the Dolphins, Raiders, Commanders, Bears and Lions. Please excuse us Jets fans for not turning cartwheels over keeping that kind of company.

“We used to talk about the 1970s being the dark days for the Jets. No, these are THE dark days and the darkest days by far. In today’s NFL, with free agency, a salary cap, and additional postseason berths, you have to work awfully hard to not have yourselves the occasional game not just in the playoffs but in this Divisional Round.”

And the 49ers took Brock Purdy with the 262nd pick of the NFL draft, not the second.

These are the Jets, and even when they show the kind of promise they did across the first two-thirds of the season, you see how it ends. My friend is right. It’s more than them not being in the playoffs. It really does feel at this time of year as if the Jets aren’t even in the league.

If you believe, as Boras the Agent wants you to believe, that the Mets only relied on the opinion of one doctor before backing away from their original deal on Carlos Correa, then you also believe in — spoiler alert — the Easter bunny.

On the day when the Bills and Bengals play this postseason game against each other, it’s pretty amazing to consider that it’s just one day shy of three weeks since Damar Hamlin’s heart stopped in Cincinnati.

“The Music Man” with Hugh Jackman and Sutton Foster, which ended its run last Sunday at the Winter Garden, wasn’t just a fine Broadway moment over this past year.

It was a fine New York City moment, too.

It’s not just Donald Arthur Mattingly who belongs in the Hall of Fame.

It is Thurman Munson, too.

You know what the Knicks are hoping?

They’re hoping that they can turn into the football Giants by the end of this NBA season, and light up the Facial Recognition Garden in the playoffs once more.

It would mean the Knicks actually winning their first playoff series in ten years.

Our Jets have gone 12 years out of the playoffs?

The Knicks have gone a full decade without winning a playoff series.

You know one of the reasons why the Knicks didn’t get Donovan Mitchell, by the way?

Because the guys in the front office were convinced the Cavs weren’t willing to give up what they finally did to get Mitchell out of Salt Lake City.

Watching Andy Murray, 35 years old now, playing bigtime tennis with a surgical hip, come from two sets down to Thanasi Kokkinakis in the Australian Open the other night, finally winning 7-5 in the fifth set after being on the court for nearly six hours (finishing at four in the morning), was just another piece in what has become such a thrilling comeback story for him.

If you are a reader of my column, or follow me on social media, you know that he was a 20-year-old bombardier in B24s during World War II, flying 31 missions over Europe after never having been further than 40 miles from his home in Sherrill, N.Y. before he went off to fight for his country.

He has led an honorable and brave and kind American life, as a son and brother and husband and father and grandfather, now ready to welcome his first great-grandchild into the world.

I’m asked sometimes what the secret of his longevity is, and I always give the same answer:

Every time I think the world has gone completely off its rails, I do the same thing.

I remember the world still has my father in it.

See you at triple digits in a year.

Mike Lupica’s new thriller with James Patterson, “The House of Wolves,” made its debut at No. 2 on the New York Times Best Seller list for hardcover fiction this week, and No. 1 at Publishers Weekly.