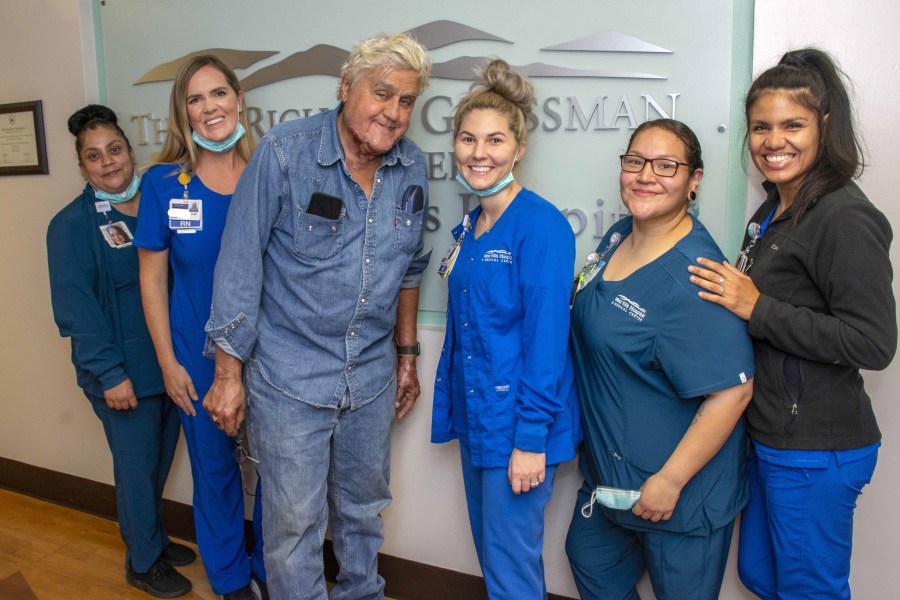 Jay Leno has been discharged from a Los Angeles area hospital a little over a week after he suffered “serious burns” in a gasoline fire in his garage.

Staff from the Grossman Burn Center shared a photo alongside the comedian where everyone was smiling.

“After a 10-day stay at the facility, Jay will receive follow-up care at the Grossman Outpatient Burn Clinic for burns to his face, chest, and hands he received during a fire at his home garage,” doctors said in a media release. “Jay would like to let everyone know how thankful he is for the care he received, and is very appreciative of all of the well wishes. He is looking forward to spending Thanksgiving with his family and friends and wishes everyone a wonderful holiday.”

“I am pleased with Jay’s progress, and I am optimistic that he will make a full recovery,” Dr. Peter Grossman, Leno’s physician, said.

The former “Tonight Show” host underwent treatment in a hyperbaric chamber as well as a surgical excision and grafting procedure, which removes unhealthy tissue to help the wounds heal.

Last week, Leno was in his garage when one of his cars burst into flames.

A longtime employee of Leno’s told KTLA’s Mary Beth McDade that it was a steam car that caused the problem. The steam was made by gas, and the comedian was sprayed with some gas that ignited.

“I got some serious burns from a gasoline fire. I am OK. Just need a week or two to get back on my feet,” the comedian said in a statement to Variety shortly after he was hospitalized.

Leno’s accident caused him to pull out of appearances in Las Vegas, St. Louis, and Denver.