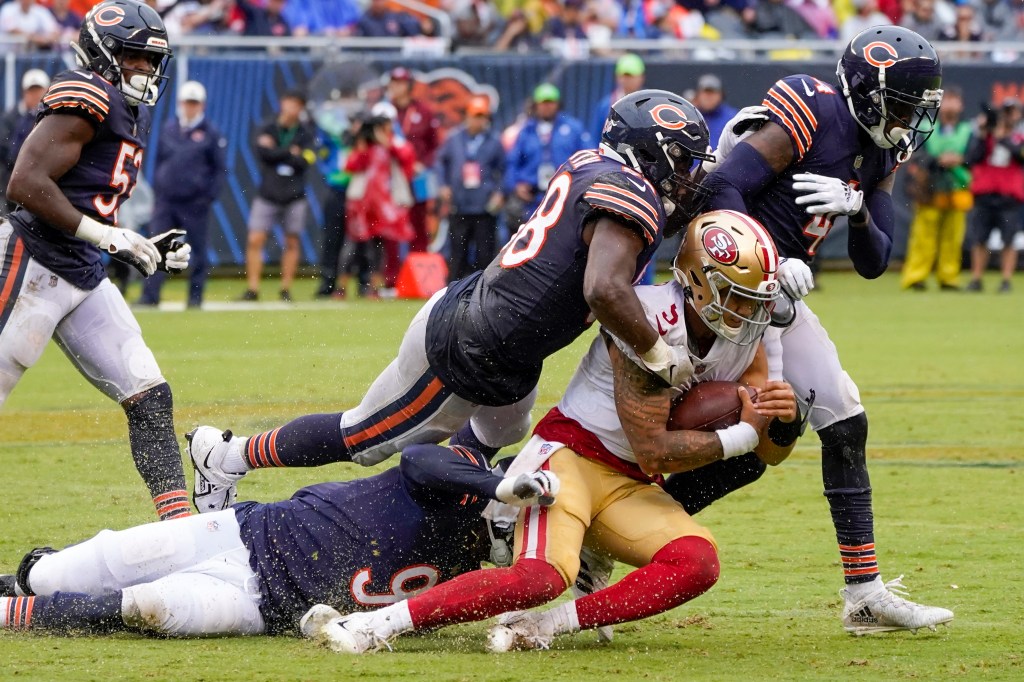 No time to think, gotta panic.

It’s one of my favorite lines from a co-worker long, long ago who uttered those words during an office crisis caused by a burst pipe with water spraying everywhere.

I imagine the same thing going on Monday on social media and talk radio, with the 49ers coming home 19-10 losers to the vastly inferior Chicago Bears during their regular season opener at Soldier Field.

It was ghastly and brutal. But there shouldn’t be any shock about how and why it happened, as coach Kyle Shanahan pointed out afterward.

Ugly and unfortunate, but not exactly a death knell. While it’s the obligation of the 49ers to make the corrections and, the media to pick over the remains, here are some reasons to shelve the overreactions on Morose Monday:

Shanahan doesn’t even believe in preseason games, and training camp is more truncated than ever due to the Collective Bargaining Agreement which stresses safety concerns.

A team can get a quarter of the way through the season before they hit a stride they used to hit by Week 2.

Take a look around and who looks like world beaters in the NFC West?

Not the Rams, who were beaten soundly by Buffalo with quarterback Matthew Stafford looking so shaky KNBR radio host and 49ers play-by-play announcer Greg Papa is certain there’s something wrong with his arm.

And he may be right.

The Cardinals got worked over by the Kansas City Chiefs and Patrick Mahomes, with coach Kliff Kingsbury saying afterward Arizona had to sharpen up its practice habits. Which is sort of the job of the head coach, last I heard.

Seattle gets going tonight with Geno Smith as the starting quarterback. Enough said.

In terms of the NFC as a whole, Green Bay looked awful against Minnesota — as it did last year in its opener against New Orleans. And we know how that turned out. Is anyone really buying Minnesota and Kirk Cousins as the next big thing? Dallas was a shell of itself if its loss against Tampa Bay even before Dak Prescott broke his thumb, meaning he’ll be out six weeks or so.

The weather was horrible

A fact, not an excuse. And yes, both teams had to play in it. It wasn’t exactly an ideal debut setting for Trey Lance, but so be it.

But if you’re already on the Jimmy Garoppolo train, it’s time to check yourself.

As Nick Wagoner of ESPN points out, the 49er have had two other games with weather conditions similar to Sunday in Chicago. They beat Washington 9-0 and lost to Indianapolis (and Carson Wentz) last season at Levi’s Stadium.

This one wasn’t on Lance, even if he took the healthy approach and assumed personal responsibility.

The 49ers roster is still loaded

Nick Bosa is still Nick Bosa, even though he had just one early sack. Deebo Samuel is still Deebo Samuel, even though an early lost fumble  courtesy of the Bears’ Jaylon Johnson cost the 49ers in the red zone.

George Kittle actually made the trip to Chicago before sitting it out with a groin injury, an indication he’s probably not headed to injured reserve which would mean a minimum of a four-game absence.

Elijah Mitchell’s knee injury is worrisome in that injuries keep cropping up, but there are other backs who could take up the slack — including Samuel if the 49ers take it that way again.

The 49ers linebacking trio of Fred Warner, Azeez Al-Shaair and Dre Greenlaw is one of the NFL’s best. The corners still appear massively upgraded with Mooney Ward and a healthy Emmanuel Moseley.

And second-year strong safety Talaona Hufanga was a force to be reckoned with for much of the game in a way he never was as a rookie.

In the aftermath, the 49ers at the podium and those that spoke to our Cam Inman didn’t sound shell-shocked in the least.

Rather, the 49ers got exactly what they deserved and the bounce-back at home this week against a Seattle team playing on a short week after facing their former quarterback Russell Wilson Monday night will be telling.