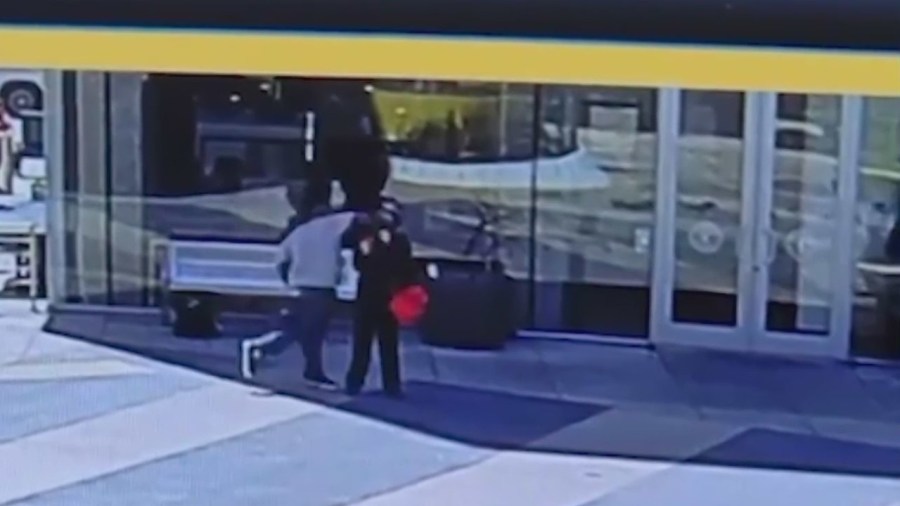 A Navy veteran who was standing at a bus stop in Koreatown says he was sucker punched during an unprovoked attack by a stranger and the incident was captured on video.

The victim, who wanted to be identified only as “Leo,” said he was looking at his phone while standing at a bus stop near the intersection of Wilshire Boulevard and Vermont Avenue when a man who had been seated on the bench near him got up and punched him in the face.

Leo noticed before the punch that the man appeared to be anxious.

“I didn’t think too much of it and before you know it, I blacked out,” Leo said.

Video shows the man taking a couple of steps toward Leo and then punching him in what appears to be an unprovoked attack.

Leo said he didn’t remember anything when he woke up on the ground.

“It was a very scary feeling, not knowing what happened,” he said. Leo eventually went back to see the surveillance video.

A woman seen in the video walked up to Leo after the incident and called 911, although he says he can’t remember much of anything before the paramedics arrived.

Leo’s face shows scratches and bruises from the punch, but he still doesn’t know why the stranger attacked him.

“Initially I thought it was a hate crime because it was unprovoked … but I don’t know for sure,” Leo said.

As for the attacker, police are still searching for him.