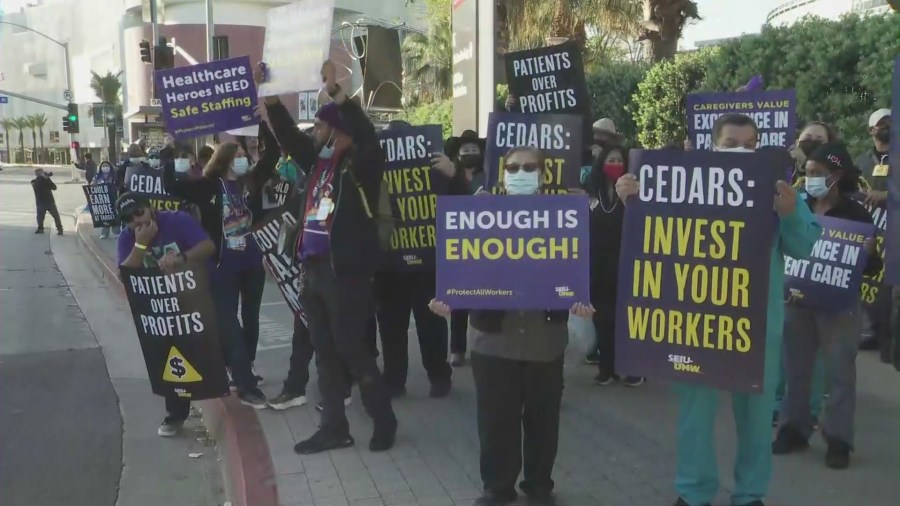 The union accuses Cedars-Sinai of a series of unfair labor practices.

Surgical technician Taryne Mosley, who is also on the bargaining team, said she is a mother with a lot of expenses she can’t afford with her current pay.

“I need to be able to pay for these things, and I work at an institution that is supposed to be prestigious, where I should be allowed to be able to afford to do that. And I can’t,” Mosley said.

Jose Sanchez, environmental services worker at Cedars-Sinai, said his sister is also employed at the hospital and she has had to ditch her car and take the bus to work because she can no longer afford to pay for gas.

“Cedars need to listen to us, because all of us are struggling right now,” said Sanchez, who is also on the bargaining team.

Sanchez said the workers want: “COVID-19 safety protocols in place, we also want wages that are comparable to the inflation that’s going on right now, as well as enough staffing for us to take care of our patients safely.”

The union has been bargaining over their new labor contract with the hospital system since March.

Cedars-Sinai President and CEO Thomas M. Priselac released a statement saying that the union, which represents about 14% of employees at the medical center, broke off negotiations without responding to Cedars-Sinai’s latest offer.

“I am deeply disheartened to share this news. For nearly two months, Cedars-Sinai Medical Center has negotiated in good faith with representatives of SEIU-UHW to reach a fair and mutually beneficial agreement for employees represented by the union,” the statement read. “We had hoped to avoid a strike with contract offers that would continue to reward our represented employees with market-leading pay—including substantial pay increases—for their hard work, excellent performance and dedication to the community.”

Cedars-Sinai said nurses, physicians and researchers are not part of the union and that the medical center will remain open and fully operational during the strike.