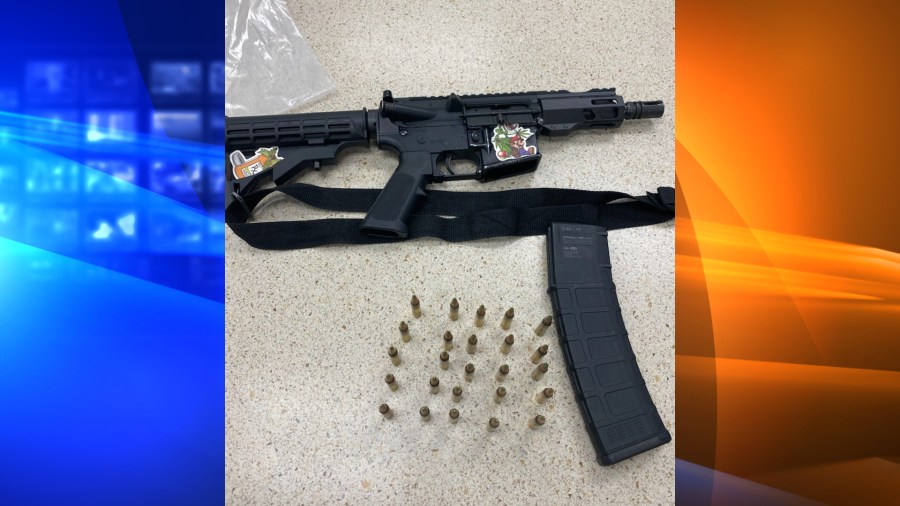 A reckless driver who nearly caused a collision was found to be in possession of a so-called ghost gun, resulting in his arrest and the seizure of the weapon Wednesday morning, authorities said.

Larry Cabrera, a 29-year-old San Bernardino resident, fled after a deputy pulled over his vehicle near Davidson Street and Tippecanoe Avenue, the San Bernardino County Sheriff’s Department said in a press release.

Cabrera was stopped after he was speeding and “almost caused a traffic collision with another motorist on the roadway,” but he left a loaded AR-15 in his abandoned car, the release said.

The customized rifle had a shortened barrel — shorter than the state-mandated 16 inches — as well as a pistol grip, telescoping stock, a high-capacity magazine containing 25 rounds of 5.56 ammunition and no serial number, according to the Sheriff’s Department.

Deputies found Cabrera in a residence near his abandoned vehicle, and he was arrested on five felony charges: being a felon in possession of a firearm, unlawful possession of ammunition, possessing a high-capacity magazine, possessing a short-barreled rifle and carrying a loaded handgun without being the owner of the gun.

Cabrera is being held in lieu of $50,000 bail, and he is due to appear in San Bernardino Superior Court on Friday.

Anyone with information is asked to contact the Central Station at 909-387-3545.