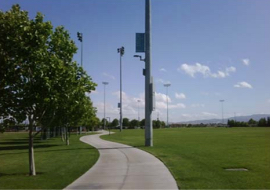 Build it and they will come. That’s the hope of the Brentwood City Council with its proposed Sand Creek Sports Complex, which got a shot in the arm with approval of a contract for the design and planning of the multimillion dollar facility.

The Brentwood City Council on Nov. 15 unanimously approved the hiring of Verde Design Inc. of Granite Bay to plan and design the project geared for soccer on 30 acres at Sand Creek Road and Fairview Avenue.

“Thank you so much for this,” Councilmember Jovita Mendoza said in her opening remarks on the item. “I’ve been waiting 20 years, so I’m very excited.”

Bruce Muldur, director of Brentwood Parks and Recreation, said Verde Design was one of 24 businesses that expressed interest and one of two that submitted bids. Planning would begin later this month and continue through next year and include public input, with construction earmarked for 2024, he said.

“They (Verde Design) have emphasized that they understand the operational approaches to balancing local recreation needs and league play with tournament-level facilities,” he said. “And they’ll work with Brentwood on determining the optimal operational model and design customized to Brentwood.”

Long in the making, the soccer filed complex, along with possible park amenities like playground equipment, restrooms and a picnic area, would be built on 14.5 acres of city property.  A second phase, in a 19.5-acre retention basin, would include two or three additional soccer fields.

Estimated cost of the planning and design work is $1,945,331, an amount that includes a 15% contingency of $253,738 in case more is needed as the project progresses. The total project is estimated at $15 million, to be paid mainly by American Rescue Act funds and trails development impact fees.

Though councilmembers were generally supportive of the project, which was earmarked in the city’s strategic plan as a top priority, they questioned whether natural turf should be part of any plans.

“You said the emphasis would be on artificial turf on the city portion,” Councilmember Karen Rarey said. “But, depending on what the community input is on it, are you saying that what we had said during our strategic initiative session – that we wanted artificial turf on that land – can be changed by public input?”

Muldur agreed that artificial turf works “really well,” but suggested that the landscape experts and community should weigh in when it comes to that stage of the planning process.

“There’s a lot of different considerations that go into natural turf versus artificial turf,” he said.

Rarey said she understood there are pros and cons but didn’t like to see the decision taken out of council’s hands and given to parks and recreation commission.

“It’s our strategic initiative and we no longer have a say,” she said.

But Muldur countered that the City Council at any time can bring the project back for review. City Manager Tim Ogden added that if the council wants artificial turf, it will be designed that way.

Mendoza reiterated the idea was to offer artificial fields because that’s what soccer tournament organizers prefer.

Mulder explained that the intention was artificial turf to be used for the upper portion of the land to maximize the number of fields but natural turf was planned in the basin area.

“Our goal with this is to bring in warm bodies to drive economic development, to bring warm bodies into the businesses in Brentwood,” Mendoza said, adding that maximizing the number of fields was important.

“I know that Santa Clara is working on one … they’re not even going to have space between the fields in order to maximize the space (for more fields),” she said.

City Attorney Damien Brower reminded council that the item before them was just a design contract to start the process.

Residents who spoke all supported the project but disagreed on the type of turf.

Danny Dohrmann said artificial turf can get too hot, making the fields unplayable.

“I’m concerned because it sounds like the direction staff is going to be given his artificial turf, despite the fact that we haven’t even considered what it is we in the community would like to see,” Dohrmann said. “It sounds like to the point where you folks don’t even want to get the party started unless it’s specifically artificial turf.”

“From a maintenance standpoint, grass is really, really, really expensive,” she said. “…. You also have to take a look at the practicality in the maintenance. If you’re gonna have a soccer tournament with hundreds of kids playing soccer on the grass all day, you will destroy the fields.”

Before motioning for a vote on the design contract, Rarey reminded councilmembers that the city did extensive outreach two years ago, including with soccer players, and “artificial turf was at the top of the list.”