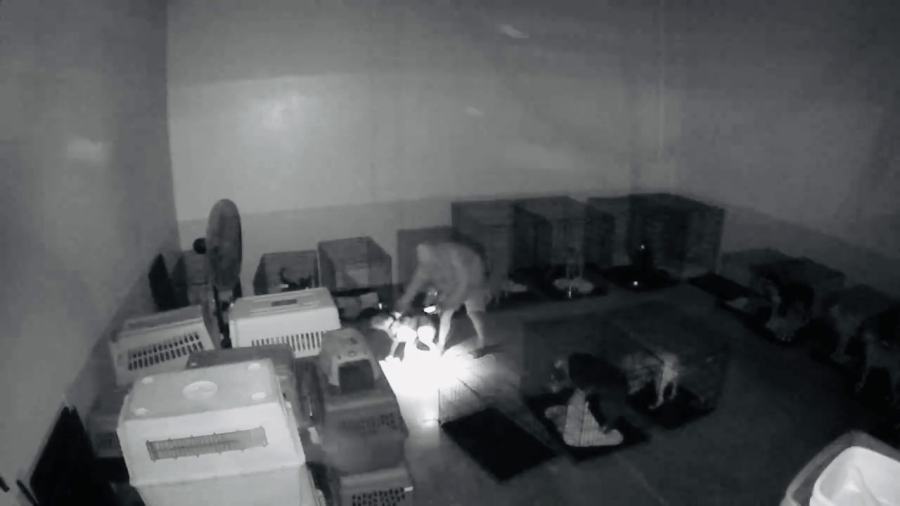 Volunteers at a no-kill shelter in Camarillo are mourning the death of a German Shepherd that was stolen in the dark of night and was found later in the middle of the 101 Freeway.

Last week, Paw Works shared video of an intruder inside their facility as he inspected several crates where large dogs were being housed. After several attempts, the intruder opened the crate occupied by a young female German Shepherd named Pretty Girl.

The security footage appears to show Pretty Girl resisting the dognapper, who responds by smacking the dog with a flashlight. He then walks the dog out of frame while the dog struggles.

Video of the dognapping received thousand of likes and hundreds of comments as people offered words of support for the dog and promised to keep an eye out for her.

But sadly, later that day, Brittany Vizcarra, the shelter’s director, posted an update on social media, moments after the 3-year-old German Shepherd was found in the middle of Highway 101 at the Conejo Grade between Camarillo and Thousand Oaks.

The dog had suffered serious injuries both external and internal, and it was suspected that she had been hit by a car. The teary-eyed update by Vizcarra informed followers of Pretty Girl’s situation, saying that her condition was not good and her injuries were life-threatening. Video of the dog inside a vehicle showed her bloodied body and clear distress.

Another follow-up post later in the day announced that the dog’s symptoms had worsened and she died at the veterinary hospital. Despite her untimely death, Vizcarra thanked the Good Samaritan that stopped and picked up the dog from the 101 Freeway to give her a fighting chance and the opportunity to pass in comfort and surrounded by those who cared for her.

After video of Pretty Girl’s theft was shared on social media, donors began pulling their money to offer a reward for information that leads to the arrest of her dognapper. After only a few days, the reward has surpassed $17,000, with a $5,000 donation coming from PETA.

Now Paw Works is hoping that someone who saw the video of Pretty Girl being stolen recognizes the dognapper and comes forward.

Anyone with information about the dog’s death is asked to contact the volunteers and staff at Paw Works at 805-799-3937. Tipsters can also reach out via direct message on social media.