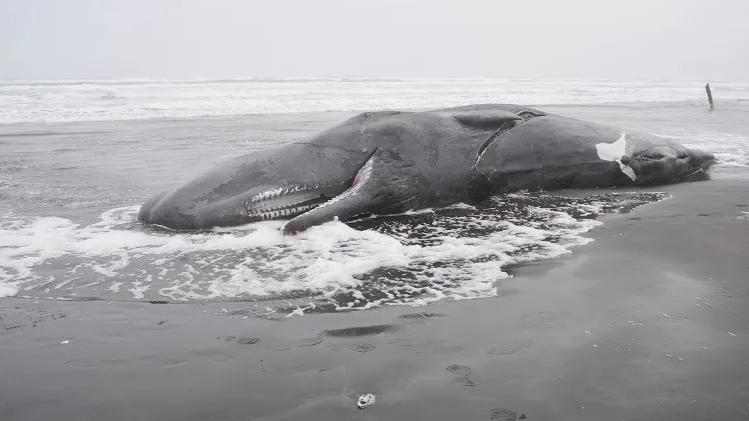 A 40-foot sperm whale that washed ashore on the Oregon coast Saturday died after it was hit by a ship, according to a necropsy completed Monday.

The necropsy was conducted by scientists with the National Oceanic and Atmospheric Administration.

“The whale then apparently floated a while before washing ashore on Saturday,” Milstein told KTLA sister station KOIN.

The whale was dead before it washed ashore in Warrenton, according to the nearby Seaside Aquarium.

The necropsy also revealed that the whale was a male, about 20 years old, and was in generally good health at the time it was struck.

The Seaside Aquarium told beachgoers to feel free to look at the whale, but not to touch it because it could potentially spread disease to humans or pets.

Sperm whales, according to the NOAA, are at increased risk of vessel strikes due to their practice of “rafting,” during which they rest at the surface between dives. The animals are still listed as endangered under the Endangered Species Act, despite populations slowly recovering from widespread whaling practices over the last few centuries, the agency reported.

Male sperm whales can grow to be up to 60 feet and weigh over 40 tons, according to the Seaside Aquarium. They can live for up to 60 years, maturing around age 52.