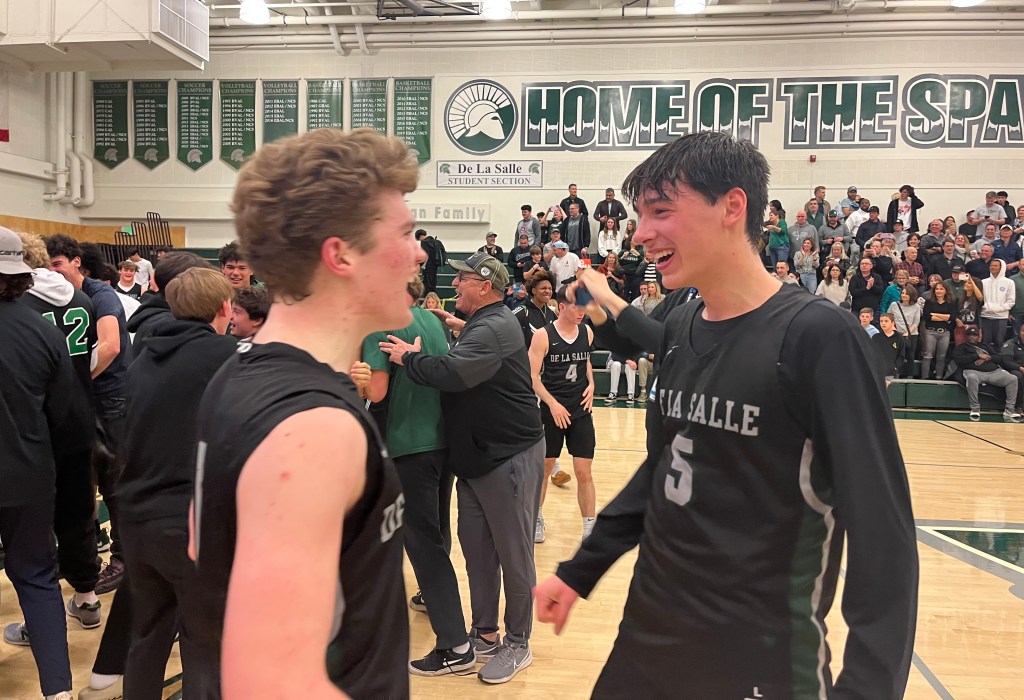 CONCORD — West Linn was ranked No. 1 nationally by USA Today.

The Oregon school’s resume included a win over Bronny James’ Sierra Canyon-Chatsworth team and another over Texas powerhouse Duncanville, both at a big tournament in Oregon last month.

The team’s best player, point guard Jackson Shelstad, is headed to the University of Oregon.

Monday, at its annual MLK Classic, De La Salle ignored the hoopla and played its game. When it ended, the home team’s students stormed the court to celebrate a most memorable 63-53 victory.

Leo Ricketts, a 5-foot-10 guard, played like big red. The junior with bushy red hair buried four 3-pointers on his way to 17 points.

Alec Blair added 14 points and made Shelstad work for everything he got.

Evan Wells chipped in with 10 points.

And the team as a whole played textbook basketball down the stretch as it put away a game that was tied at halftime and De La Salle led by only a point through three quarters.

“I think we can play with anyone,” Ricketts said after being named the player of the game. “Our team, for sure, has the talent. I know we’ve put in the work. I am really confident in what we’ve done as a group.”

West Linn held De La Salle in check through the first quarter, which ended with the visitors ahead 11-5.

But Ricketts came off the bench to ignite the Spartans in the second quarter, scoring eight points in the period as De La Salle went to the locker room tied 25-25.

The visitors immediately surged in front to start the second half as Shelstad nailed a 3-pointer and Sam Leavitt followed with another to make it 31-25.

De La Salle held the lead the rest of the way to ignite a celebration on the court and in the locker room, which was soaked with water after the team was done.

“I watched on film and was like, ‘We can play with these guys. I know we can,’” coach Marcus Schroeder said. “They’ve got a couple of really, really good players and they have really good players around them. But I knew if we executed on both ends of the court, we could be in the game.

“Obviously, it helps to be on the home court. All that stuff matters. Our students were awesome. The fans were awesome. We executed enough and we made shots, the second half especially.”

As big as the victory was for De La Salle, it has little time to enjoy it.

The Spartans — ranked third by the Bay Area News Group — return to EBAL play on Wednesday at home against second-ranked San Ramon Valley, which had started 15-1 before losing close league games last week to No. 1 Dougherty Valley and No. 7 California.

“I told the guys we’ve got a huge game Wednesday night,” Schroeder said. “They’re really good. They had a tough start. Played two really good teams, one at home, one on the road. We’ve got to be ready to go. It will be a battle.”