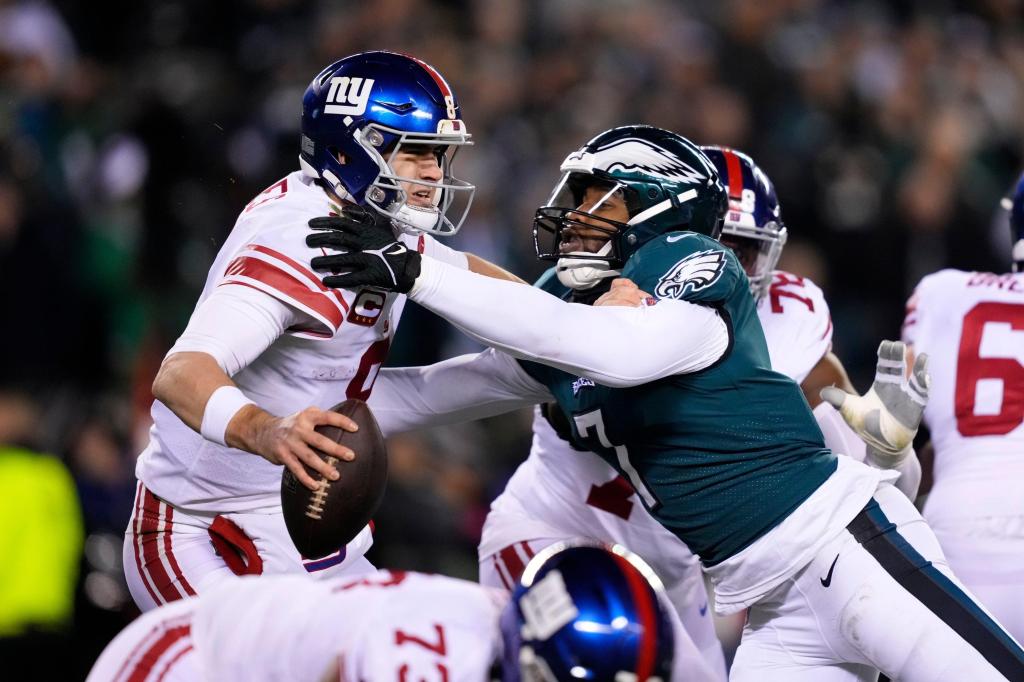 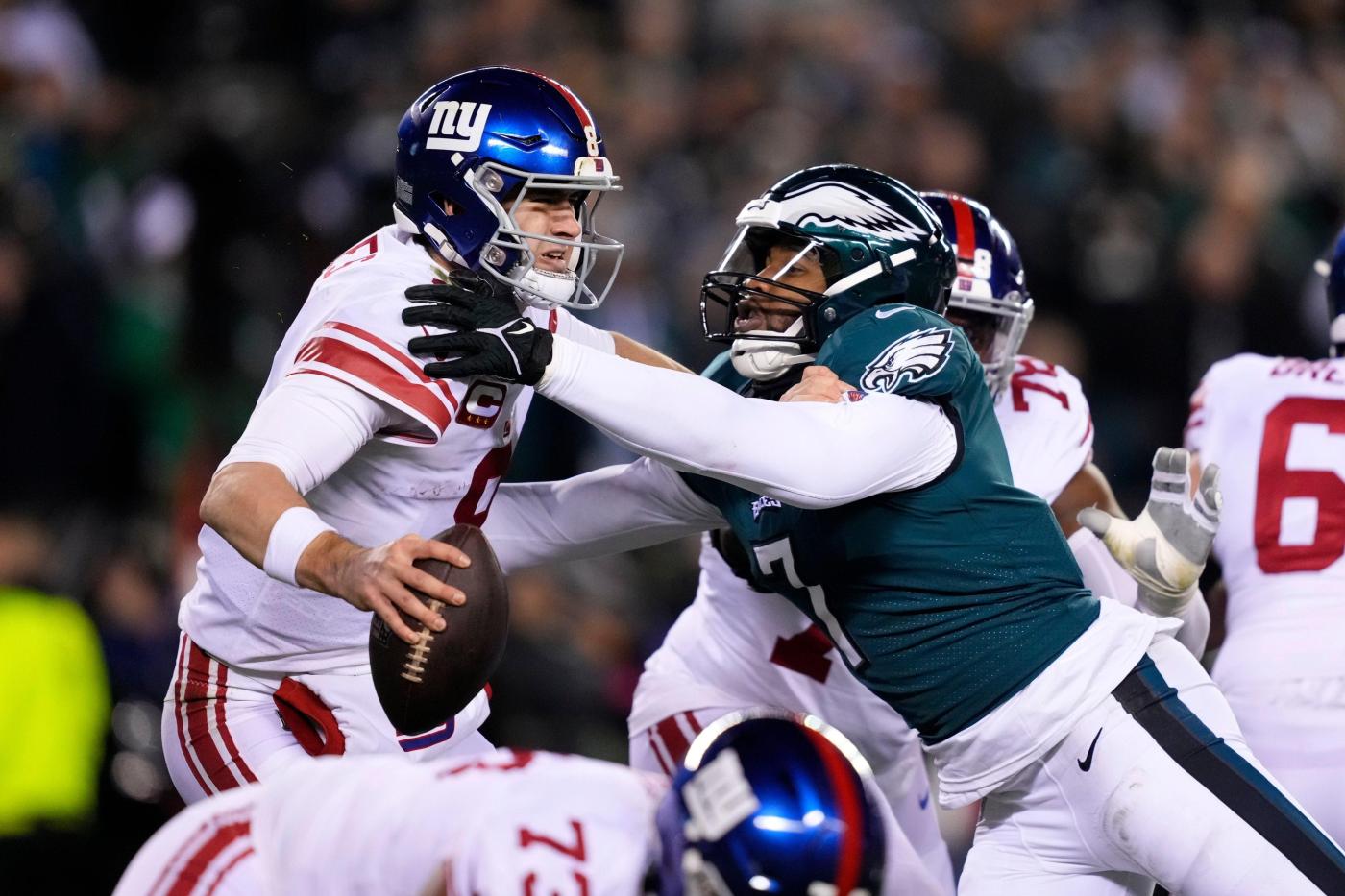 PHILADELPHIA — Quarterback Daniel Jones would not commit to a future with the Giants after Saturday night’s 38-7 blowout divisional round loss to the Philadelphia Eagles at Lincoln Financial Field.

“I mean, we’ll cross that bridge when we get there,” Jones said, when asked if his offseason goal was to remain the Giants’ QB. “I’ve really enjoyed playing here. I appreciate all those guys in the locker room. It’s a special group of guys. And I really enjoyed being a part of it. We’ll figure out where that goes, but I have nothing but love and respect for this organization and the guys in the locker room.”

The Giants can use the franchise tag to retain Jones’ rights for at least another season, negotiate a longer-term extension or let Jones walk.

The Giants can use the franchise tag to retain Jones’ rights for at least another season, negotiate a longer-term extension or let Jones walk.

He improved dramatically in his fourth NFL season, his first under head coach Brian Daboll and offensive coordinator Mike Kafka. And that appeared to solidify a future for Jones with the Giants for at least 2023, if not longer.

But Jones then completed 15 of 27 passes for 135 yards, no TDs and an interception on Saturday, adding only six rushes for 24 yards. And his tepid tone postgame definitely left the door open to an interesting negotiation, at least.

“I think we’ll get into that down the road,” Jones, 25, said of his future. “I think at this point this is still very fresh — this season, this loss. We’ll take some time to regroup and think about that going forward.”

Saquon Barkley, by contrast, stated firmly that he wants to remain a Giant.

“I’ve been vocal about how I feel and where I want to be,” said Barkley, who is also a free agent. “Now that’s outside my control. I wanted to show the Giants that the guy they drafted is still here. I hope I did that. Everyone knows I would love to be a Giant for life, but I really can’t give 100% answers. It’s out of my control. And sometime this week I’ll get in a conversation with my agent … and see what’s up.”

Barkley’s agent and the Giants already talked about parameters for a potential contract extension in the fall. Who knows what his future holds after Saturday’s quiet 82 total yards? Is GM Joe Schoen really interested in paying big money for a running back?

Jones’ Saturday night dud, meanwhile, doesn’t completely undo the progress he made in 2022. But it no doubt will impact the final evaluation of his worth from the Giants’ end.

Under pressure from blitzing slot corner C.J. Gardner-Johnson, Jones fired to Darius Slayton on a curl route to his left. Bradberry jumped the pass and intercepted it at the Giants’ 46-yard line with 27 seconds left in the first quarter.

“Didn’t execute well enough early on,” Jones said. “Didn’t score points. The turnover was critical, and we just kind of fell behind.”

The offensive line played a part in the turnover, with Gardner-Johnson racing right past left guard Nick Gates to hassle the Giants QB. But Jones had thrown only one interception in his last seven games and turned the ball over a total of eight times in 17 starts this season, including a clean Wild Card win in Minnesota.

And the Giants still had played on a razor’s edge this season and won several close games in their 6-1 start that became the primary reason for their postseason berth.

Daboll had set a poor tone on the Giants’ first drive by going for it on 4th and 8 from the Eagles 40-yard line, trailing 7-0 and seeing Jones sacked for a second straight play by Haason Reddick.

And Jones’ interception compounded the coach’s mistake with a second straight offensive turnover to start the game for the Giants.

Before they knew it, the Giants were down 28-0 at halftime, outgained 258 to 64 by Philadelphia.

Jones’ run attempts were limited mainly because the Giants didn’t run that many plays. They only had the ball for 9:48 in the first half compared to the Eagles’ 20:12.

And though a 40-yard Barkley run led to the Giants’ lone points on Matt Breida’s 8-yard TD run with 6:15 left in the third quarter, the Giants wouldn’t score again.

Jones should have had one TD pass on a wide-open downfield throw that was dropped by leading receiver Richie James (seven catches, 51 yards).

Regardless, Saturday’s defeat didn’t just lead to disappointment. It also created uncertainty, especially once Jones stepped to the microphone and didn’t commit to a future with the Giants.