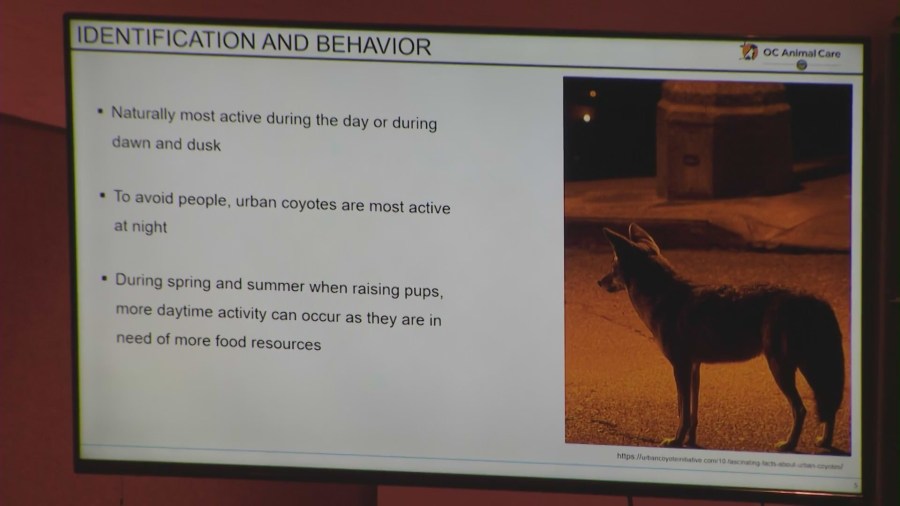 Many people were understandably shocked after a coyote attacked a young girl near the Huntington Beach pier last month, but wildlife experts say that behavior is not that uncommon and there’s a lot that people don’t know about the animals.

A special meeting was held Monday in hopes of educating the public and dispel myths about coyotes. The meeting, however, left some people visibly frustrated.

Some in attendance yelled about a perceived lack of action on the part of wildlife officials, while others shared stories of coming face-to-face with the wild canines.

Coyotes live in packs, mate for life, and are critical in reducing the rodent population. They are not strictly nocturnal, like many think, and their biggest enemy is cars — not people. But encounters are becoming more and more prevalent in residential neighborhoods as they search for food.

Randal Massaro, an animal rights activist who spoke during public comment, said humans share the bulk of the blame for the increase in coyote encounters.

“Man has to be held accountable and responsible,” Massaro said. “We’re the ones leaving trash cans open.”

Massaro also said many fishermen in Huntington Beach leave fish out which could be drawing in coyotes looking for the perfect snack.

Experts hoped to use the forum to quell the fears of some local residents who had questions or concerns following the attack on the toddler last month.

The 2-year-old girl was seriously injured with bites to her head and face. Two coyotes were killed at the scene, one of which was confirmed to be the culprit through DNA.

Rebecca Barboza of Fish and Wildlife said you can’t remove coyotes from their natural habitat because they’ll “turn around and go right back.”

Coyotes are normally very timid with human interaction, but they occasionally demonstrate aggressive and violent behavior.

If you encounter one, it’s time to start “hazing,” officials said. That means getting loud and shouting if you see one in your neighborhood.

Several people at the meeting voiced their frustration, saying the information and advice they were getting was ineffective. One woman said she reported a coyote to wildlife officials, but no one ever showed up.

Officials said there are no simple, easy solutions for dealing with the animals, but encouraged anyone who comes in contact with one to report it, because they do keep track of reports.

While coyotes encounters are probably inevitable, officials do have tips for people looking to reduce the chance of coming face-to-face with one of them: