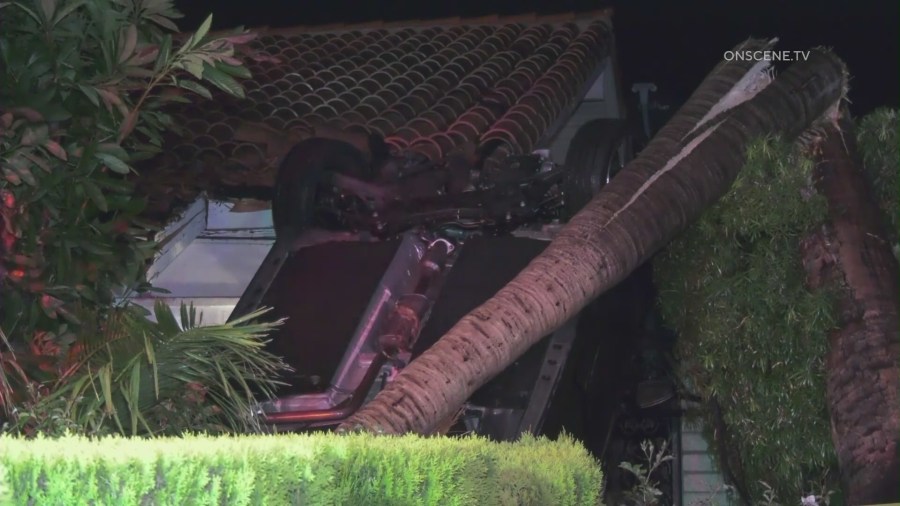 A speeding car flew into a Tustin home and burst into flames Friday morning.

The 2 a.m. collision occurred on La Loma Drive when a car, which appeared to be going at a high rate of speed, jumped a curb, hit a mailbox, flipped upside down and plowed into the front corner of a house in Tustin.

A young woman lives in the home with her grandmother, who is nearly 90 years old, though neither of them were seriously hurt.

The young woman did not want to talk on camera but said she heard a woman screaming, then a man said, “We have to go! We have to go!”

Samuel An, a neighbor whose security footage captured the wreck, said he helped the occupants out of the car.

“There was a lady trapped in there. She was actually trapped by her pants, so I pulled her out, and then another gentleman came out after that,” An said.

Battalion Chief Kyle Kuzma of the Orange County Fire Authority said the occupants were able to escape before the car caught fire.

“We immediately began extinguishing the vehicle fire and checking for occupants both in the vehicle and in the house,” he said.

The man who was in the car was arrested, and An said he could smell liquor on that man’s breath. The woman was taken to the hospital by paramedics, though her injuries are not believed to be serious.