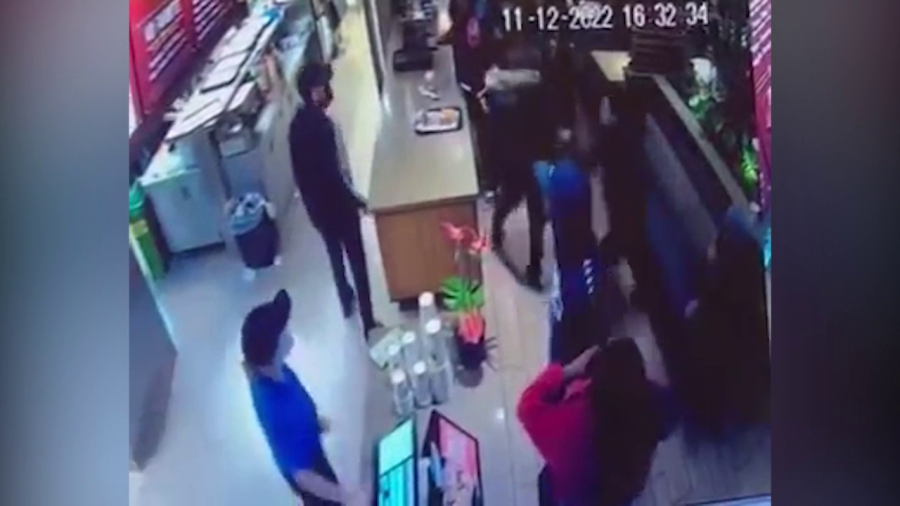 ANTIOCH, Calif. (KRON) — The assistant manager of The Habit Burger Grill in Antioch lost the ability to see out of her right eye in an attack Saturday evening at work. Surveillance video (above) obtained by KTLA’s sister station KRON4 captured the attack on camera.

The woman, 19-year-old Bianca Palomera, had just started her shift at the restaurant, located at 2430 Mahogany Way when the altercation occurred. She said she saw what she believes to be a high school-aged boy harassing the teenage special needs brother of one of her Habit co-workers.

The boy was there to pick up his sister when the suspect, unprovoked, started to pester him. Palomera decided to intervene, telling the suspect, “You can just leave.”

She says he then got in her face and began yelling at her, using an anti-Mexican slur. Fists flew after that, and Palomera suffered a serious injury to her eye.

“I thought I was crying, but then I realized that it was blood going down my cheek onto my shirt,” she said. “And then at the ER, when they opened it, I asked, ‘did you open my eye?’ And, that’s kind of when I knew I couldn’t see. It was just black.”

Doctors told Palomera that her eye was ruptured and she will not be able to see out of it again. The community has raised more than $31,000 online to help with her medical expenses.

Palomera said that after the attack, the suspect’s group collected their food and left the restaurant. They drove away from the scene in a gray BMW SUV.

Even though her life has been changed forever, Palomera said she would do it all again.

“Even though I did get basically disabled, or you know, I can’t see out of my eye, don’t be afraid to step up for somebody whether you know them or not,” she said. “If you won’t do it, no one else will. If you’re scared to do it, at least let someone else know what’s going on. Two people are better than one.”