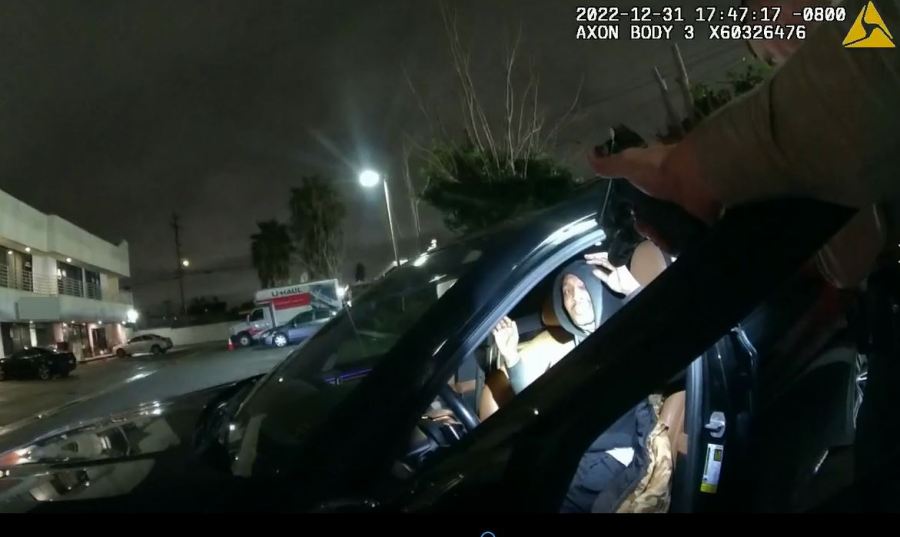 Body cam footage was released on Friday of a traffic stop involving a rapper in South Los Angeles that has gone viral on social media.

The video shows a Los Angeles County Sheriff’s deputy threatening to shoot the unarmed driver while he was sitting inside his car in Gardena on Dec. 31.

“If you take off in this car, I’m going to shoot you,” says the deputy in the video. “I’m going to make it super easy on you. You put this car in drive, you’re getting one right to the chest.”

The video has since gone viral, sparking public outrage and concern.

Lebron said he was using his cell phone while in his car at a parking lot on the 14900 block of Crenshaw Boulevard when two passing deputies approached him, asking him to exit his vehicle.

As the first deputy tries physically removing him from the driver’s seat, the second deputy says, “I’m just going to spray you. Get out or you’re getting sprayed,” while pointing a pepper spray can at the rapper.

Eventually, it escalates as the deputy points a handgun toward Lebron. As Lebron stays seated with both hands raised, he asks the deputy why he wanted to shoot him.

The rapper is told that if he doesn’t comply, he’ll be arrested and his car would be towed. He eventually steps out of the vehicle and is taken into custody.

“Unfortunately for you, you shouldn’t smoke so much weed in your car and then we wouldn’t have to search you,” the deputy says as Lebron is being handcuffed.

“I didn’t smoke no weed in my car, it’s not illegal,” Lebron replies.

“Do you have anger issues?” the deputy asks as the patrol car doors close on the rapper.

The L.A. Sheriff’s Department released a statement on the incident saying, “One deputy displayed pepper spray, then drew his firearm and used unprofessional language, which later resulted in a complaint filed by that community member. The Sheriff’s Department has opened an investigation into the deputies’ actions and language.”

After the incident, Lebron was not arrested and was instead given a ticket for a missing license plate.