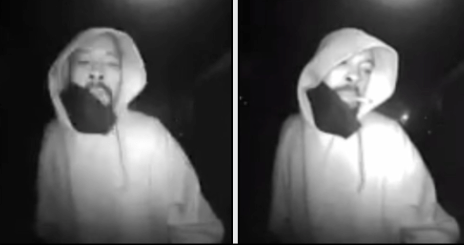 The Los Angeles County Sheriff’s Department released images of a person of interest sought in the fatal shooting of a man who was sleeping in his Palmdale home last week.

Dante Pickens-Horton, 32, was shot multiple times while he was asleep in his home on the 37300 block of Cedrela Avenue, according to the Sheriff’s Department.

He was pronounced dead at the scene.

Authorities say the man in the photos they released was seen walking in the neighborhood before the shooting.

The man is seen in the photos wearing a light-colored hooded sweatshirt, a black face mask and appeared to be smoking a cigarette.

Authorities did not release any additional information about the man, except to describe him as a person of interest.