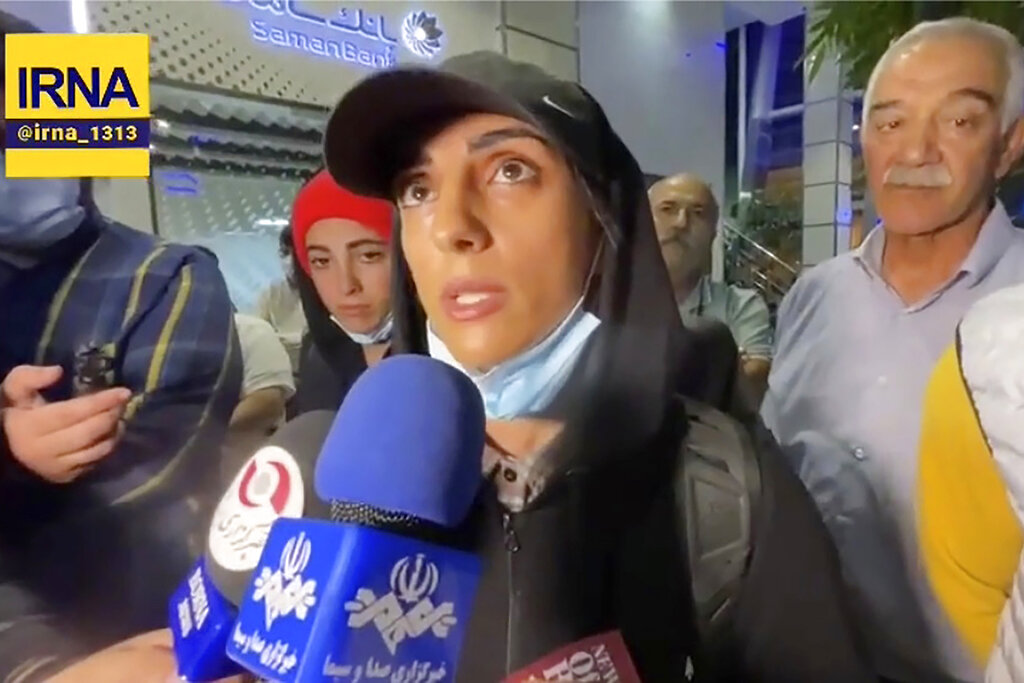 DUBAI, United Arab Emirates (AP) — An Iranian sport climber who had been the subject of widespread worry after she competed without a headscarf showed up Wednesday in Tehran and made a public statement calling the lapse “unintentional.”

Elnaz Rekabi, 33, reportedly left a day earlier than planned after the competition in South Korea, and the BBC said her phone and passport had been taken by Iranian officials.

Her appearance without the hijab was widely seen as an act of support for anti-government demonstrators amid weeks of protests over the death of a young woman who had been detained by the country’s morality police.

After landing in Tehran, Rekabi gave a careful, emotionless interview to Iran’s hard-line state television, saying that going without a hijab had been an unintentional act on her part. However, hundreds gathered outside Imam Khomeini International Airport — including women not wearing the hijab — and cheered for “Elnaz the Champion,” casting Rekabi as an inspiration for their continued protests.

The future Rekabi faces after returning home remains unclear. Supporters and Farsi-language media outside of Iran have worried about her safety.

During her final bouldering event Sunday at the International Federation of Sport Climbing’s Asia Championship, Rekabi wore a headscarf. But an hour later, when she came out for the lead-climbing event, she instead wore a black headband, with her hair pulled back in a ponytail.

An explanation posted earlier to an Instagram account in her name said that her not wearing the hijab was “unintentional.” That post said she was caught off guard by a call to come to the competition arena and didn’t have time to put on the headscarf — although video of the event showed her apparently relaxed as she approached the wall.

In front of the cameras in Tehran, she gave a slightly different explanation: “Because I was busy putting on my shoes and my gear, it caused me to forget to put on my hijab, and then I went to compete,” she said.

She added: “I came back to Iran with peace of mind although I had a lot of tension and stress. But so far, thank God, nothing has happened.”

She was wearing a sweatshirt with the hood covering her head, and a baseball cap on top of that.

Rekabi left Seoul on a Tuesday morning flight. The BBC’s Persian service, which has extensive contacts within Iran despite being banned from operating there, quoted an unnamed “informed source” as saying Iranian officials as seized both Rekabi’s mobile phone and passport. BBC Persian also said she initially had been scheduled to return on Wednesday, but her flight apparently had been moved up unexpectedly.

Later on Wednesday, the International Olympic Committee said it held a joint meeting with the International Federation of Sport Climbing and Iranian officials. The IOC said it received “clear assurances that Ms. Rekabi will not suffer any consequences and will continue to train and compete.”

The IOC described Rekabi as being with her family and said she joined a call with officials.

Rekabi was not scheduled to compete in the final World Cup event of the climbing season, this week in Japan.

She was one of eight Iranian athletes competing at the Asian championships. Her performances in the bouldering and lead-climbing disciplines qualified her for Sunday’s combined final, in which she finished fourth among the women.

Climbing federation officials said Rekabi wore the hijab during her previous appearances at the weeklong event. While most of the women competed in shorts and tank tops at the outdoor venue, she wore a long-sleeved shirt and tights.

The Iranian Embassy in Seoul had denied “all the fake, false news and disinformation” regarding Rekabi’s departure. But instead of posting a photo of her from the Seoul competition, it posted an image of her wearing a headscarf at last year’s climbing world championships in Moscow, where she finished third in the combined event.

Fissures in Iranian society have become deeper during nationwide protests sparked by the Sept. 16 death in custody of Mahsa Amini, 22, who had been detained by the morality police over her clothing.

So far, human rights groups estimate that over 200 people have been killed in the weekslong protests and the violent security force crackdown that followed. Iran has not offered a death toll in weeks. Demonstrations have been seen in over 100 cities, according to the group Human Rights Activists in Iran. Thousands are believed to have been arrested.