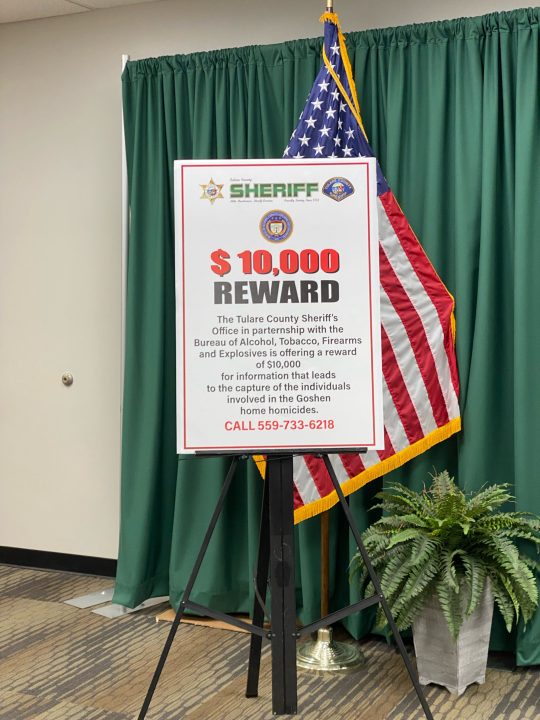 TULARE COUNTY, Calif. – The Tulare County Sheriff’s Office on Tuesday released the identities of six people killed in what was described as a “massacre” in Goshen, California – as well as information about a reward for information in the investigation.

Tulare County Sheriff Mike Boudreaux says that on Monday at 3:38 a.m. the Tulare County Sheriff’s Office was dispatched to a home in the 6800 block of Harvest Road. Multiple shots had been fired which led them to believe there was an active shooter in progress.

Deputies arrived on the scene seven minutes later and reported discovering two people dead. It was later learned that a 911 call came from a surviving victim of the shooting who had not been hurt and had been hiding.

According to Sheriff Boudreaux, the deputies then found a third deceased victim in the doorway of the home. As deputies continued to search the area they found multiple victims in the area of the property. There were victims inside and outside of the home. One of the victims was still alive, says Sheriff Boudreaux. Deputies immediately started CPR and the victim was transported to the hospital where he later died.

The victims of the shooting have all been identified by the Tulare County Sheriff’s Office:

The baby Nycholas and her mother Elyssa, were found laying next to each other down the street according to deputies and investigators believe that Elyssa and her baby were running from the scene. Through forensics, they learned that the shooters stood over Elyssa and fired rounds into her head. Nycholas also suffered from the same attack. They say it was deliberate, intentional, and not by accident.

Officials clarified that the ages of both Elyssa Parraz and Nycholas Parraz were updated from the previous day.

Deputies say that there were three surviving victims from what they are describing as a massacre. There was one person in the home hiding as they could hear the gunfire in the home. They say he was holding the door closed.

Deputies say they are looking for two suspects, possibly a third that could have been a getaway driver. They also revealed that this family was targeted and that there are both gang and drug associations involved. However, Sheriff Boudreaux emphasized during Tuesday afternoon’s press conference that not everyone in the home was a gang member or a drug dealer.

Regarding the history of law enforcement at the home, deputies say that on January 3 they conducted a parole compliance check on this home. They say it’s a known home to the Sheriff’s Office as gang activity has routinely occurred in the past. During the compliance check deputies saw shell casings outside of the home. When asked to enter the residence deputies were denied entry – so they obtained a search warrant.

Sheriff Boudreaux described the shooting as a cartel-style execution. While he is not saying that a cartel could have been involved, he is also not eliminating the possibility. The victims were clearly shot in the head and in places where the shooter would know that a quick death would occur.

Autopsies of the victims are expected to be completed by Friday.

Deputies say that detectives are collecting hundreds of pieces of evidence and as of Tuesday afternoon are still canvassing the area. The Tulare County Sheriff’s Office is asking those living and working in the area to look at security videos between the times of 3:00 a.m. to 5:00 a.m. and to submit it to the department if any suspicious activity was recorded. There is currently a reward of up to $10,000 for information that helps this investigation move forward.

The investigation is being assisted by resources provided by the ATF, DEA, FBI, Homeland Security, Department of Justice, and the California Department of Corrections.