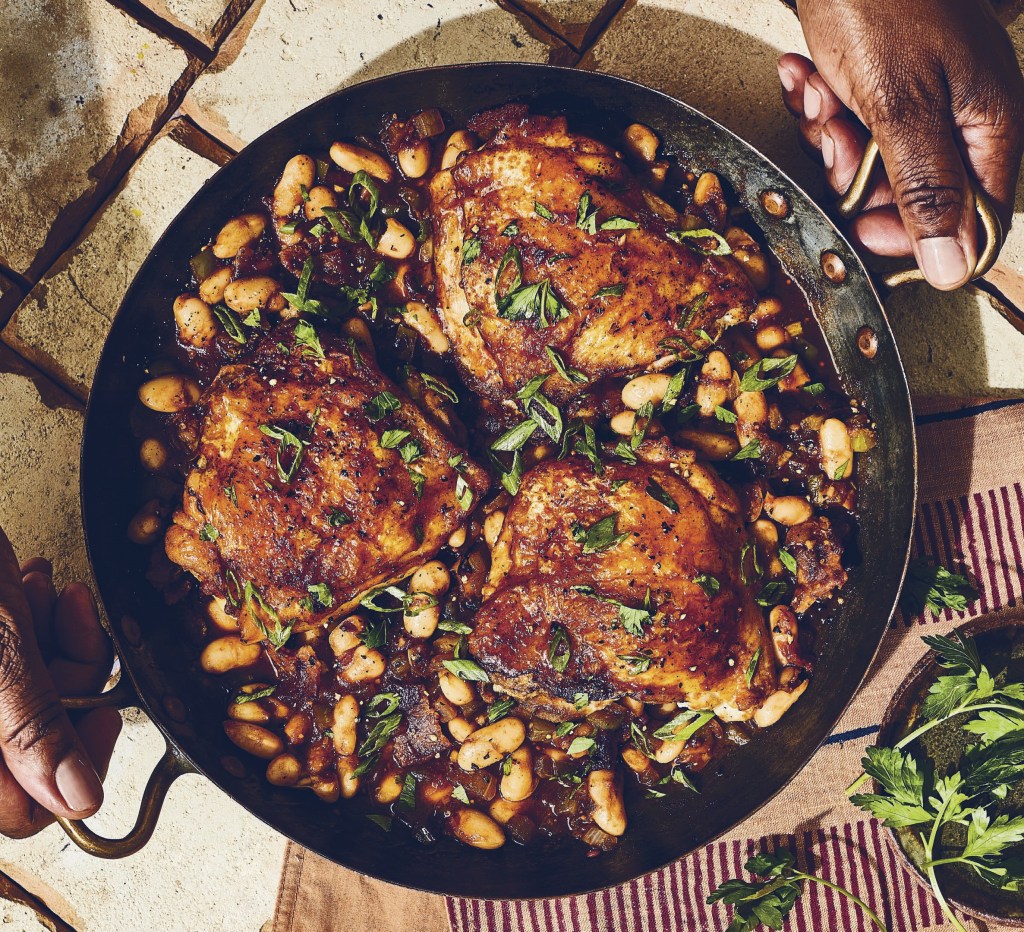 Every fall, food journalists are inundated with a hefty crop of cookbooks dubbed the most-highly anticipated of the year. This September was no different.

But imagine our delight when we sifted through dozens of titles on everything from French cakes to “modern hippie” food to discover that the very best — the ones that made us bust out the Post-Its, whether earmarking for a certain diet, easy weeknight meals or inventive deliciousness — were written by Bay Area chefs and authors.

One introduces us to the fascinating world of the Puerto Rican diaspora and its most beloved dishes. Another gathers simple, home-run recipes from our favorite “genius” chefs. Yet another is a vegan follow-up to a meat-centric bestseller about Chinese food with California influences. (Yes, Danny Bowien resides in New York City, but he founded Mission Chinese Food in San Francisco, so he’s ours).

And if you’re wondering why Ten Speed Press keeps popping up — we noticed that, too — the local publisher has become known in recent years for its work with Bay Area chefs, food writers and and other culinary voices. Here are five new cookbooks you don’t want to miss.

Due out Oct. 25, “Tanya Holland’s California Soul: Recipes from a Culinary Journey West” (Ten Speed Press, $35) is the first cookbook in eight years from the beloved Bay Area chef and host of “Tanya’s Kitchen Table.” Her first, “Brown Sugar Kitchen” (Chronicle Books, 2014), was an homage to her acclaimed Oakland restaurant, and its famous soul-food dishes. “California Soul” is totally different.

The cookbook, written with Maria C. Hunt and Kelley Fanto Deetz, with a passionate foreword by Alice Walker, casts a much wider and historical net, tracing the roots of California soul food to the Great Migration, with personal stories of Holland’s own family journey from the Deep South to the West Coast. Within its beautifully-photographed pages are spotlights on 15 Black Californian food makers — like Ashlee Johnson-Geisse of Hayward’s Brown Girl Farms — whose work helps fuel the state’s modern soul food movement.

The chapters, organized by season and filled with so much fresh, good-looking produce, illustrate Holland’s always-dynamic cooking style, where Black Southern traditions mingle with a local sustainable sensibility. Her tabbouleh calls for raw collard greens and mint instead of parsley. Her charred okra topped with lime and flaky sea salt will make you forget the slippery stuff, and the braised chicken thighs with smoky white beans should be on rotation for anyone who wants to up their poultry game.

If you bow at the altar of “The Mission Chinese Food Cookbook,” here’s what creative author and chef Danny Bowien has been up to since 2015: He got married, became a dad, got divorced, got sober, turned vegan and wrote a dazzlingly delicious Korean food-inspired follow-up.

Co-written with JJ Goode, “Mission Vegan: Wildly Delicious Food for Everyone” (Ecco Hardcover; $40) celebrates both Bowien’s personal journey and the evolution of his Mission Chinese Food restaurants in New York and San Francisco, where Kung Pao Pastrami and Cumin Lamb Rib is at home alongside Mapo Tofu.

There are entire chapters on kimchi, noodles and dumplings, vegetables, stews, soups and rice dishes, including an intensely spicy fried rice that’s mellowed with loads of fresh herbs, and a dish of buckwheat noodles topped with dragon fruit ice. Ingredients are easier to find, and the techniques are simpler than Bowien’s first cookbook, but you still may need to make trips for mushroom powder, gochugaru, black vinegar and acorn jelly. These palate-opening, flavor-packed recipes are worth the effort.

Food52 founding editor Kristen Miglore’s latest cookbook is “filled with recipes that can bend around whatever life hands you and make it better.” Miglore understands that intimately. She started working on “Food52: Recipes for Beginners, Busy Cooks and Curious People (Ten Speed Press, $35) in 2018, before becoming a mother, cooking through a pandemic and moving cross-country to Sunnyvale.

The 100 simple yet craveable recipes in this collection, due out Sept. 27, feature the same caliber of chefs as her award-winning “Genius” series — think Jacques Pepin, Samin Nosrat and Andrea Nguyen — but the focus is on building confidence, saving time and breaking rules.

The “Speedy, Sensible Weekday Breakfasts” chapter offers the best 15-second scrambled eggs and a cocoa almond oatmeal Miglore’s now-toddler asks for by name. “Hands-Off Dinners For When You Want to Start Cooking Then Do Other Things” features the secret to slow-roasted salmon. And “Good Things To Make Ahead for Lunches All Week” offers up Nosrat’s killer buttermilk-marinated roast chicken. Don’t miss the make-ahead soccata spun from a chickpea flour batter laced with kale and tomatoes. It works for brunch or dinner, vegans or carnivores.

Healthy in a Hurry

“Against All Grains’” Danielle Walker is back with a new collection — her fifth and largest to date — of healthy recipes geared toward grain-and-dairy-free eating. Walker, who lives in the Walnut Creek area, has been whipping up paleo-friendly dishes for more than a decade, and the 150-plus recipes in “Healthy in a Hurry: Real Life. Real Food. Real Fast” (Ten Speed Press, $35) prove she’s still got the touch for quick, no-cook lunches, sheet-pan dinners and simple desserts that fit the diet.

The collection, which came out Sept. 6 and is currently No. 1 on Amazon’s gluten-free list, offers creative solutions for breakfast (Twice-Baked Sweet Potatoes, Three Ways), mac and cheese dinners made with grain-free noodles (chickpea is her favorite) and skillet Philly cheesesteak — breadless, of course. Dessert is perhaps the most intriguing chapter, with recipes for Banana Mug Chocolate Cake made with coconut flour, Lemon Meringue Pie Pudding topped with grain-free graham crackers and a Dole Whip alternative called Pineapple Whip.

Illyanna Maisonet’s long-awaited cookbook on Puerto Rican cuisine is so much more than pasteles and platanos. In “Diasporican: A Puerto Rican Cookbook” (Ten Speed Press, $32.50), the San Francisco food writer and pop-up chef dissects the roles that geography, immigration and colonization have played in shaping the food that is still cooked by the 5.5 million Puerto Rican people living stateside.

Due out Oct. 18, it is an enlightening, painful, often funny and very personal read, as Maisonet weaves the political history and disappearing foodways of Puerto Rico with the story of her own family, who immigrated to the working class neighborhood of South Sacramento, where she was born. Maisonet learned to cook by watching her grandmother, and many of the cookbook’s 90-plus recipes have a grandmother or mother story.

You’ll learn about the Taino, African and Spanish influences on Puerto Rican food, and why sofrito, a paste made of herbs, tomatoes, garlic, onion, chiles or other peppers, is the bedrock of the cuisine. There’s an entire chapter on fritters, including flaky pastelillos, delicate bacalaitos and rich, picadillo-filled empanadillas (don’t call them empanadas). Another offers a deep-dive into soul-satisfying beans, soups and stews. There are stunning examples of seafood cookery and desserts aplenty.

In a sea of cookbooks pushing quick and easy recipes, “Diasporican” is a refreshing invitation to slow down — Maisonet’s lechon, or suckling pig, takes two days to prep — and embrace your time in the kitchen by discovering a fascinating yet underrepresented cuisine.

For more food and drink coverage
follow us on Flipboard.