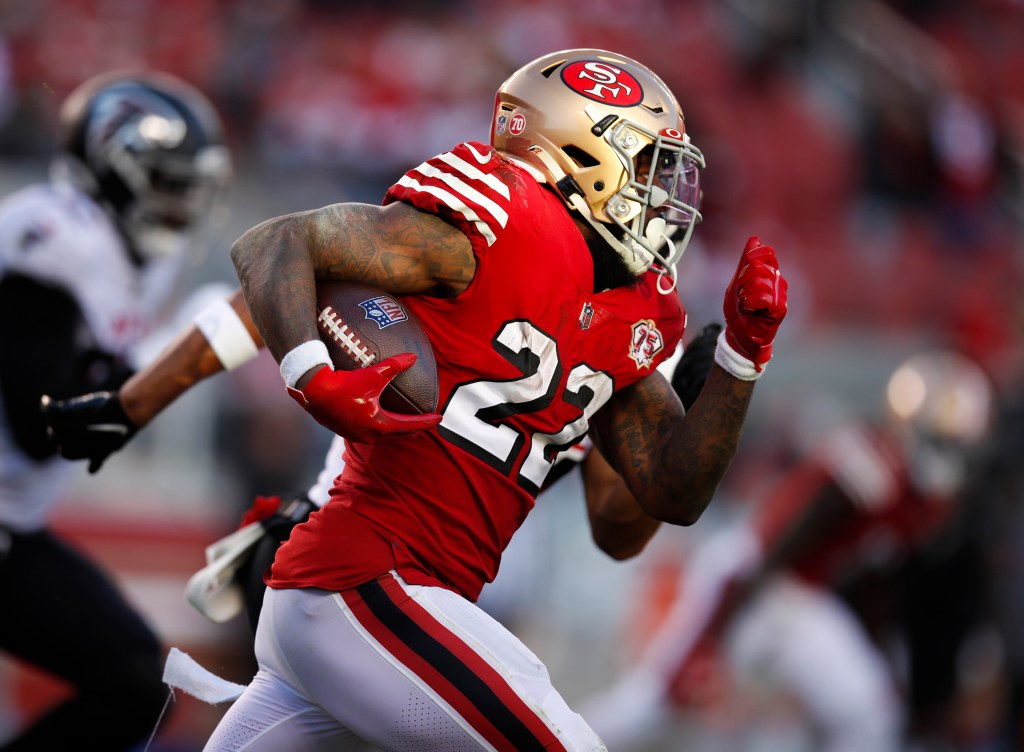 SANTA CLARA — Longtime observers of Mike and Kyle Shanahan wouldn’t be surprised if Jeff Wilson Jr. breaks loose with 100 or more yards Sunday when the 49ers host the Seattle Seahawks.

Or it could be undrafted rookie free agent Jordan Mason. Or rookie third-round pick Ty Davis-Price.

It’s been that way for the 49ers since Kyle Shanahan took over as head coach in 2017, with a different leading rusher in each of the last five seasons: Carlos Hyde (938 yards), Matt Breida (814), Raheem Mostert (772), Wilson (600) and Elijah Mitchell (963). Seven different runners have broken 100 yards in a game since Shanahan arrived, led by Mitchell and Breida at five times each.

Mostert was on and off rosters for six different teams as an undrafted free agent before sticking with the 49ers, setting a franchise record with 220 yards rushing on 27 carries in a playoff win over Green Bay following the 2019 season. He signed with Miami in the offseason.

Players with a knack for zone scheme runs can come from anywhere.

“All our guys, our whole room, we’re right there,” Wilson said. “There’s not really too much of a difference between anybody. Everybody brings their own thing in their own way, but we work together and we see things the same way.”

The roots of the 49ers running game go back to Shanahan’s father Mike with the Denver Broncos from 1995 through 2008 and zone scheme runs as taught by the late Alex Gibbs, an offensive line coach who passed away in July of 2021.

Tellingly, not a single lead running back for Mike or Kyle Shanahan was drafted in the first round. Davis, the one who got it all started, was a sixth-round pick out of Georgia, No. 196 overall.

Kyle Shanahan has defied the Gibbs edict of never mixing other rushing strategies with zone scheme. Mike Shanahan joked in an interview with Pro Football Focus in 2019 that Gibbs would likely exclude Kyle from his Christmas card list because of it.

Kyle Shanahan, who worked with Gibbs in 2008-09 on Gary Kubiak’s staff with the Houston Texans, chuckled at the thought when asked about it Friday.

“Alex didn’t like new things,” Shanahan said. “We had a battle on that stuff. It was fun. I miss him.”

The Mike Shanahan/Gibbs outside zone system included a few basic runs with bootlegs and play-action passes in which the line looked as if they were blocking for outside zone. Defenders often couldn’t determine whether the play was a run or a pass until the split-second after the ball was snapped, which is a huge advantage for the offense.

Linemen ideally were athletic and lighter, able to move and stretch the defense sideways.

Kyle Shanahan said the systems he and his father ran are different in that the Broncos ran outside zone almost exclusively, whereas the 49ers use it as a foundation for the running game.

“We mix in a lot more stuff and we do our outside zone differently,” Shanahan said. “It’s evolved and changed. But the thing that’s similar is we’re always going to make people stop our outside zone. That’s where everything starts. It makes a lot of other plays better. It makes your power game, your gap schemes better and your toss schemes and man blocking better.”

McDaniel was Kyle Shanahan’s right-hand man at stops in Houston, Washington, Cleveland, Atlanta and the 49ers. They added other run schemes yearly, with Shanahan doing the play-calling at each stop.

McDaniel was hired this offseason as coach of the Miami Dolphins.

Chris Foerster replaced McDaniel as the run-game coordinator this season, and described the 49ers’ rushing game as a “catalogue” of plays that can be selected based on the opponent as one would a family style meal in a restaurant.

“It’s a big library and always developing,” Foerster said. “The great thing is we’re always looking at what’s best against the team we’re playing. You try to maximize the abilities of your players against your opponent. What do they do well? What do we do well? Kyle has created so much diversity in what we do.”

Outside zone, in which linemen are responsible for an area rather than a specific player, is basically the left jab for the rest of the 49ers’ running attack. While it enables rushers to occasionally get outside, more often it stretches the opposing defense horizontally with the runner cutting back suddenly against the flow and finding a seam.

A back must possess two incongruent qualities — the ability to be patient and then be violently decisive. Not everyone can do it. Darren McFadden was the No. 4 pick in the 2008 NFL Draft by the Oakland Raiders, but struggled so much with the zone scheme he was called “McFalldown” by the fan base. The line coach and eventual head coach was Tom Cable, a Gibbs disciple.

McFadden thrived once Hue Jackson took over the offense and installed plays and schemes that removed the patience factor in favor of something more immediate.

Wilson, an undrafted free agent, said running power out of the I-formation is more foreign to him while zone scheme comes naturally because he did it in college at West Texas State.

“You’ve got to be a very instinctive runner, and not just instinctive, you’ve got to understand the assignment at hand and what everyone is doing around you,” Wilson said. “That puts you right where you need to be. That’s pretty much the whole deal. Some people are comfortable. Some are not.”

Left tackle tackle Trent Williams, who played under Mike Shanahan (with Kyle as coordinator) in Washington, has watched as running backs have thrived without regard to reputation or draft status.

“There’s a criteria (Kyle) is looking for,” Williams said. “I think he knows what fits his offense best. To him, I don’t think it matters what round or where he finds them. If they come in and show the progress he expects, he’ll be comfortable enough to play them.”

Mitchell, out for two months with an MCL strain, was a sixth-round draft pick who set the 49ers’ rookie rushing record with 963 yards last season. He beat out Trey Sermon, a third-round pick who wasn’t decisive enough and lost out to Mason and Davis-Price for a roster spot.

“They don’t mess around, they get downhill — two types of style we need and like,” Shanahan said.

Wilson, who made the 49ers originally on the practice squad, has primarily been a reserve but called upon enough to have three 100-yard games in 2020 and 2021. Carrying the ball is the easy part. The hard part is when the ball is going somewhere else.

“There’s a lot of different things with routes, pass protection and blocking that you have to pay attention to, and those details can make it a good play or a bad play,” Wilson said. “It goes way beyond just running the ball or catching it. It’s everything in between.”

The 49ers thought they had something in Mitchell a year ago but weren’t planning on using him extensively early on. Then Mostert got hurt on his first carry, and Mitchell came in to gain 104 yards on 19 carries.

Now, with Mitchell being out, it will be Mason and Davis-Price who could get the chance to shine.

“We had a gut feeling (Elijah) could be as good as he’s ended up being, but you don’t totally know on a guy until he gets in the heat of battle,” Shanahan said.