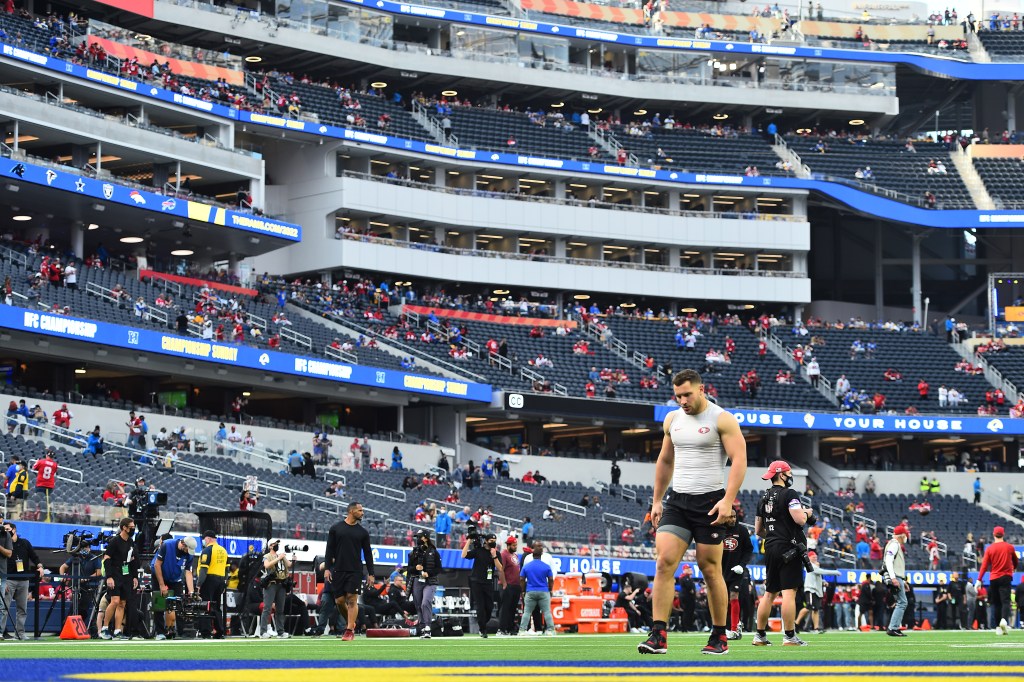 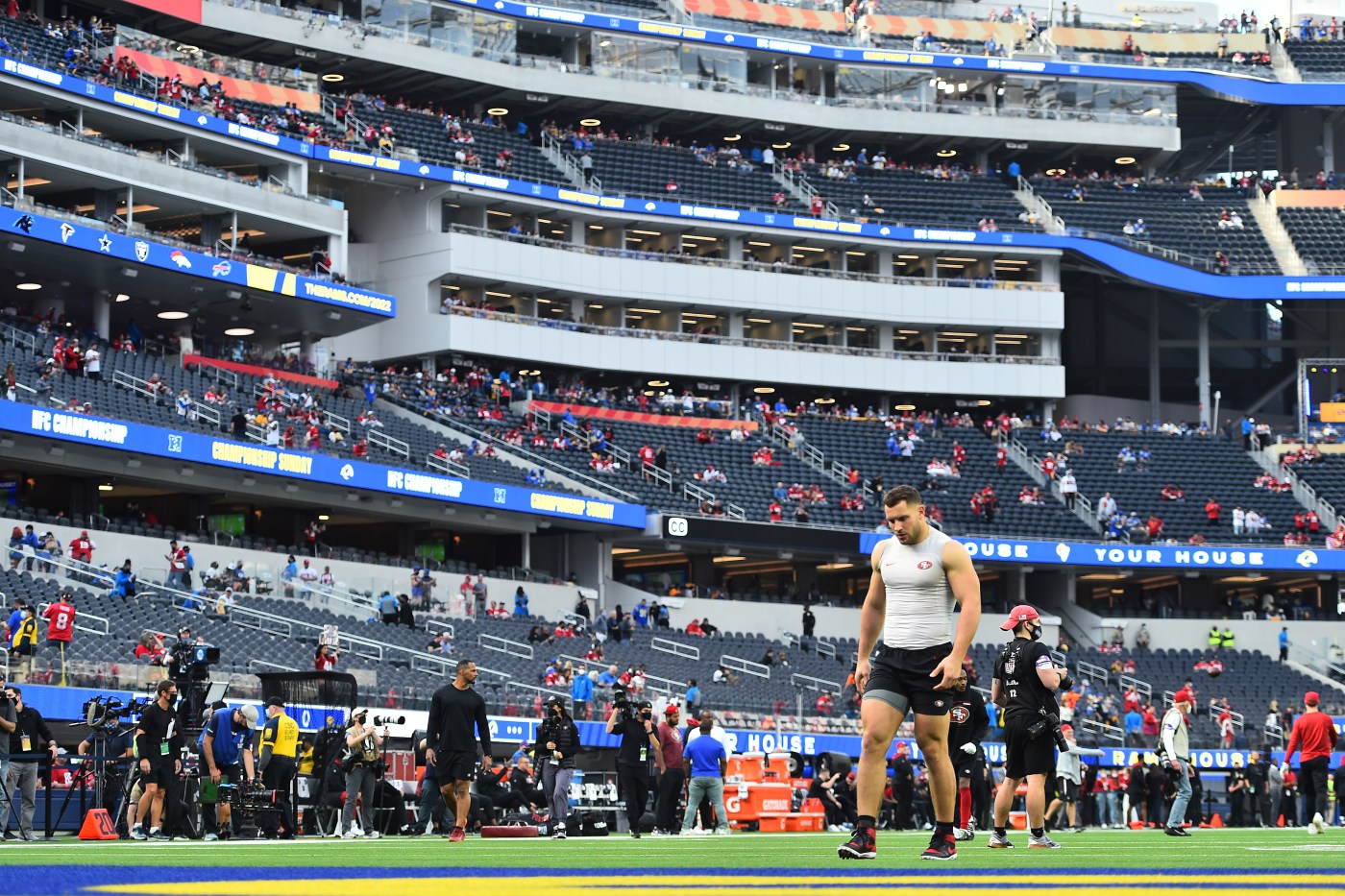 SANTA CLARA — The only thing standing between NFL sack king Nick Bosa and Cowboys quarterback Dak Prescott apparently will be a rookie left tackle Sunday when the 49ers host their divisional playoff game.

The Cowboys ruled out only one player, albeit an important one: left tackle Jason Peters, who exited Monday’s wild-card win at Tampa because of a hip injury.

Rookie Tyler Smith shifted over from left guard to replace Peters in that game and is expected to remain in that role against the 49ers, with Connor McGovern taking over at left guard.

“He’s done a hell of a job this year, especially it being his first year in the league,” 49ers coach Kyle Shanahan said of Smith. “He played at a high level most of the year in that spot. It’ll be a good matchup to watch.”

Bosa did not have a sack or quarterback hit in the 49ers’ wild-card win against the Seattle Seahawks on Sunday, but he played 40 of 68 snaps and made a definite impact, including pressuring the Seahawks’ Geno Smith on a strip-sack fumble credited to Charles Omenihu.

Bosa shared a sack in last year’s wild-card win over the host Cowboys, then a concussion forced him out before halftime. He’s excited for this Sunday’s rematch.

“Whenever you play the Cowboys, just because of the hype that they get – maybe they don’t even want that much hype, but they get it anyway – because of the team they are and the talent they have,” Bosa said Wednesday. “It’s playoff football either way so it’s going to be a big deal. But the past definitely makes it even bigger.”

“We’re going to Santa Clara, and the environment we’re getting ready to play in, we know we need to get in there and get going immediately because this is a team that’s played extremely well throughout the last 12 weeks,” Cowboys coach Mike McCarthy told Dallas-area reporters Friday.

Quarterback Jimmy Garoppolo got ruled out a seventh straight game, but he was spotted Friday leaving the practice field, where he was cleared to return this week for conditioning and “to walk a bit,” Shanahan said.

Garoppolo did not go on the injured-reserve list after fracturing his right foot Dec. 4, and the 49ers have hoped he could recover in time to serve as Brock Purdy’s backup for potentially the NFC Championship Game next weekend or the Super Bowl on Feb. 12, if they advance.

So, is the NFC Championship Game still a target for a Garoppolo comeback?

“I’d be surprised, but it depends on how this whole weekend goes. But it’s an outside chance,” Shanahan said.

And the Super Bowl offers a more realistic shot because it’s more in the distance?

“There’d be a better chance then,” Shanahan acknowledged, without vowing a spot in that Feb. 12 championship game.

Purdy has seized control of the 49ers’ staring role, winning all seven games since Garoppolo’s first-series exit against Miami. That has convinced the 49ers’ brass Purdy will be their starter entering next season, according to the San Francisco Chronicle’s Mike Silver, citing “two people with knowledge of the organization’s plan.”

The 49ers have not publicly declared Purdy the starter for next season, nor would they amid a playoff run, but the rookie phenom has done nothing to make anyone think otherwise. Reflecting on Purdy’s relief role against Miami and his first start against Tampa Bay, Shanahan said Friday: “We all quickly forgot he was a rookie.”

Lance, meanwhile, is recovering from Dec. 30, follow-up surgery on his right ankle and is expected to participate in offseason workouts.

Josh Johnson has served as Purdy’s backup the past six games, having entered to play the final 11 snaps of both their wins against Tampa Bay and Arizona.

Garoppolo has not been available for comment since his injury. Upon reclaiming his job after Trey Lance’s ankle fracture in the Sept. 18 home opener, Garoppolo went 7-3 in the starting role, including the first five wins of the current 11-game win streak.

He is 42-19 all-time as the 49ers’ starter, including 2-1 efforts in their 2019 and ’21 teams’ playoff runs. The 49ers reworked Garoppolo’s deal before the season to not only reduce his base salary to $6.5 million in an incentive-laden contract, but also assure him they would not franchise tag him and thus let him test free agency, which opens March 13.

This will be the Cowboys’ fourth straight road game, but McCarthy does not view that as a pitfall for the 4-point underdogs.

“We’re in a position now where this is a normal Friday for us. We’re recovered,” McCarthy said. “Our schedule vs. their schedule will play no bearing on this game.”

A year ago, the 49ers season ended with a fourth straight road game, as they ran out of gas in the NFC Championship Game at the Los Angeles Rams.

Earlier this season, McCarthy coined the phrase: “We’re nobody’s underdogs.” He’s sticking to that this week.

“We all like the fact people are doubting you,” McCarthy added. “We’re clearly going there expecting to win, so make no bones about that. we know the type of environment we’re going into. It’s going to be a great environment and a huge challenge. we’re counting on the Dallas Cowboys fans to show up and we know they will.

“We’re playing a tremendous football team and we’re in tune with that. We know what we need to do to win the game.”

Cornerback Ambry Thomas (ankle) was ruled out a third straight game. Wide receiver Jauan Jennings (ankle) and defensive linemen Samson Ebukam (ankle) and Javon Kinlaw (knee) were fully cleared and off the injury report after participating in practice all week.

Brett Maher missed four point-after kicks in the Cowboys’ win Monday but did not lose his job, although Tristan Vizcaino was signed to the practice squad as an option. “Brett has the ball. We’re ready to go,” McCarthy said.